“There’s something out there waiting for us, and it ain’t no man.”

Predator celebrates its 35th anniversary this summer. Decades later, with many sequels, comic books, and games, nothing has compared to the original. For all its praise, the film’s biggest achievement is in its clever mash-up of genres, and how it used this hidden plot to shake up and reinvigorate genre rules.

Predator is part science fiction, part horror, and part action movie. It blends these so perfectly that it revitalized two fading genres, the slasher, and the action movie, critiqued them,  and still stood as an exceptional piece of filmmaking. Predator tackles this task the way Wes Craven’s Scream would in the following years but without calling attention to itself.

The reason this blend works so well is the period Predator was released in. Predator arrived after a large boom of slasher films and action movies that were beginning to grow stagnant and was also at the height of Arnold Schwarzenegger’s career as a one-man army.

After the 70s brought the slasher forward with films such as The Texas Chainsaw Massacre and Black Christmas, John Carpenter’s Halloween came along and propelled the genre into the 80’s slasher boom and cemented the genre rules. A killer that resembles a force of nature more than a man picks off a group of characters (frequently teenagers) until the so-called “Final Girl” is left alone to confront the killer and outsmart them. Over time this got stale and predictable.

On the action side of things, the emergence of Arnold Schwarzenegger marked a shift in action films as well. Before Arnold, action heroes did not look superhuman, they looked like they drank and smoked too much, they got beat up, needed to work on their cardio, and were generally in danger. Then Arnold entered the scene like a Greek God descending from Olympus. Arnold’s superhuman physique leaned well to the stories of a one-man army, the hero that no man is a threat to. The 80s saw a slew of similar films such as Commando, and even First Blood: Part Two took a jarring shift in style towards this sort of action. Just like the slashers, this grew stale and predictable too. A hero not in danger lacks suspense.

Predator follows Vietnam War veteran, Major Alan “Dutch” Schaefer (Arnold Schwarzenegger) and his team on a mission to rescue a cabinet minister from south of the  American border from insurgents. Aided by Dutch’s old war buddy turned CIA, the team descends into the jungle, armed with heavy weaponry and massive biceps.

This was the perfect set-up for the movie audiences had become to expect from the era of Arnold’s ultra-masculine, one-liner-spouting, invincible action hero. From the introduction of its cast (who all could lead an action film of their own) to the assault on the compound, the movie leans into these expectations. All before pulling the rug out from the audience. It’s here the film reveals itself, shifting from action flick to slasher, with the arrival of an unseen threat that quickly kills Hawkins and Blaine back-to-back like these heroes are now the nameless goons. These men of 80s machismo were reduced to animals for slaughter. The audience knows this isn’t how this is supposed to go down. Their muscles and guns become useless, and the cast begins to resemble a group of victims rather than heroes. The team unloads their weapons into the jungle, tearing full trees to shreds and in the end, they have hit nothing. This impotence is a subversion that heralds the death to come.

Predator’s duality is deftly handled by Director John McTiernan who would go on to direct Die Hard immediately afterward. McTiernan directs the opening act of the movie differently than he does the rest of the film. The compound sequence specifically, was shot by a  second unit and in the fashion of a generic action movie, with quick cuts, excessive explosions, and disposable goons running straight into gunfire. It’s written with macho, snappy one-liners like Blaine’s “I ain’t got time to bleed,” and Dutch’s famous “Stick around,” upon throwing a  knife so well it impales a soldier to a post. It lulls the viewer into a false sense of normalcy, it’s a  film they have seen before, and it feels safe. Isolate the scene and it’s good, but merged with the rest in context, it’s masterful.

This opening act stands in stark contrast to the rest of the film which is shot with more stillness. It’s quiet and almost meditative at points with some stunning cinematography. The jungle is shot with its raw and messy nature intact. A filming condition that was incredibly tough on the crew with its verticality, extreme temperature fluctuations, and pools of stagnant, turbid waters with leeches and larvae. The jungle is dense holding unseen threats yet massive and spacious offering no safe spaces with a wall to put your back to. It feels like a labyrinth,  minotaur, and all. After Hawkins’ unceremonious death, the plot simplifies, boiling everything away slowly to its bleak and tense core, permeated with horror imagery. The hanging, skinned bodies in the trees, the grim collection of trophy skulls, the masked killer, the POV shots of slasher classics, and even the image of the “Final Girl”.

The Predator is a hunter of sport, chasing after the most dangerous game for the most prized of trophies. The very strength and weapons that make these men bastions of action movie heroism are the very thing undoing them. The more traditionally masculine the character is, the more 80’s action hero they are, and the more of a target to the Predator they become. “Don’t! Leave it! He didn’t kill you because you were unarmed. No sport.”

Slowly they are disarmed and picked off until Dutch is left alone deep in the jungle at night with the masked killer stalking him. His physical strength and his weaponry are now useless and meaningless. All he can rely on is his ingenuity, covering himself in mud to avoid its sight and setting traps. Dutch becomes the “final girl”.

Predator takes a cast of extremely competent characters and pits them against a threat that completely outmatches them, bringing the genuine danger of action films back, and the horror and unpredictability of slashers. What’s more impressive is Predator accomplishes this all while being a perfect, taut, and concise package, articulated so well visually it could be a  silent film and still thrill.

Predator’s duality, cast, and place in time cement it as the sort of rare classic that time’s flow can’t ever erode from it. 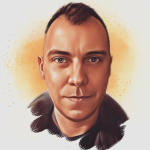