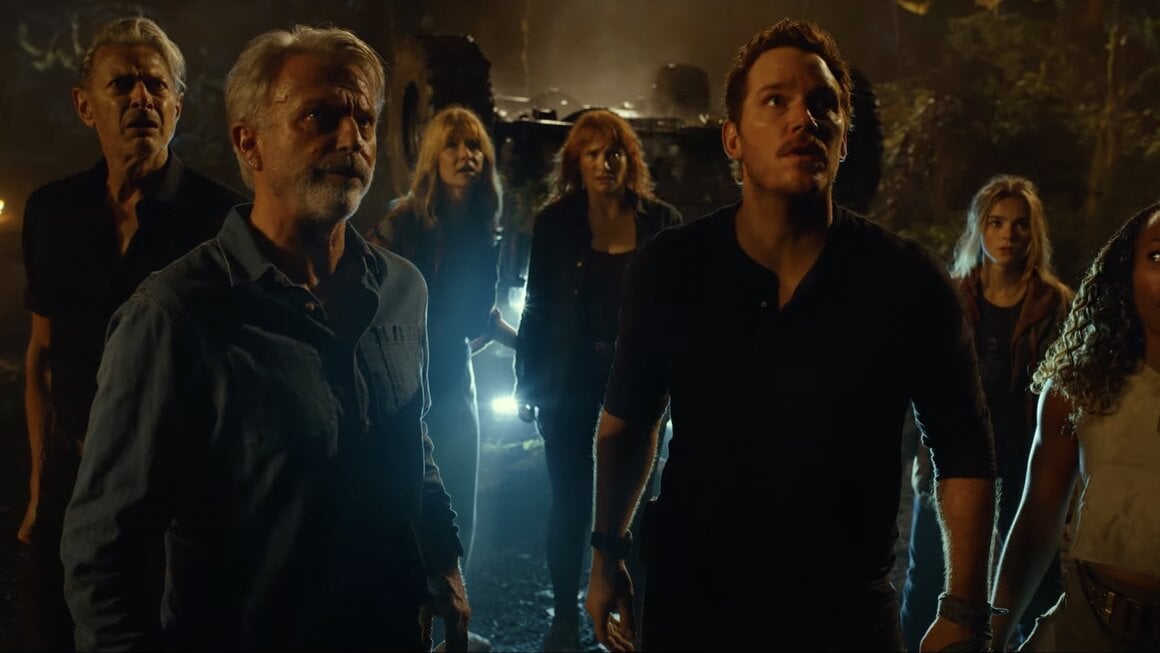 It was a clear sign from the “big” reveal near the end of Jurassic World: Fallen Kingdom that this series had less to do with humanity’s relationship with dinosaurs than its conclusion suggested. Despite Jurassic World Dominion opening up an entire planet for dinosaurs to roam and the potential to watch civilization wrestle with coexisting with the top of the food chain, Colin Trevorrow’s return to the franchise offers very little notion that dinosaurs even pose a threat to humanity or that people even pay it any mind. A movie that preys on nostalgia but doesn’t know what to do with any of it, and a film with a massive scale that gets pared down to the same tricks as before, Jurassic World Dominion brings the franchise to an unsatisfying close.

Picking up where Fallen Kingdom left off, Jurassic World Dominion opens with the acknowledgement that dinosaurs are now freely roaming Earth. A newsreel footage that quickly summarizes the first and second films suggests a world outside of the film’s isolated stories that is far more dangerous than it seems. However, Trevorrow and co-writer Derek Connolly bafflingly decide to put the dinosaurs in the background.

Instead, Jurassic World Dominion follows a plot surrounding a corporation trying to fix a mistake they made that could cause a global catastrophe. Ellie Satler (Laura Dern) discovers giant locusts eating away at crops throughout the United States that could cause an extinction-level event. With the help of her old friend, Dr. Alan Grant (Sam Neill, whose performance suggests he has no interest in the film), the two head to Biosyn Corporation headquarters upon the invite of Dr. Ian Malcolm (Jeff Goldblum making a more significant appearance than in Fallen Kingdom) to try and uncover how the locusts came to exist and try to stop them from ending the world.

However, the clue may reside with Maisie Lockwood (Isabella Sermon), revealed to be her mother’s clone at the end of Fallen Kingdom and now hidden away with Owen (Chris Pratt) and Claire (Bryce Dallas Howard) in a remote cabin. Becoming more and more sick of being cut off from the rest of the world, she gets more than she bargained for when she’s kidnapped by poachers who also take the velociraptor Blue’s child, Beta, to an unknown location.

It’s worth noting at this point that the two stories told in Jurassic World Dominion have very little to do with dinosaurs. One is about giant locusts, and the other is about a human clone. The film suggests that Beta’s additional capture matters in some way but really place more emphasis on Maisie’s role in everything. Eventually, the two stories converge and Dominion begins leaning all the way into its nostalgia, hoping that seeing familiar faces in a familiar setting will be enough to forgive the film’s lack of a significant plot.

To say that Jurassic World Dominion forgets about its main draw – dinosaurs – would be false. It crams them in when it can, but it always feels forced. Returning ideas such as weaponizing dinosaurs add some thrills to a chase sequence hinged upon the idea that the dinosaur chasing you will never give up. A novel concept never seen again in the movie. It’s about the only novel concept and again, it’s not even new as it was hinted at in Jurassic World and later refined in Fallen Kingdom.

Complaining about a lack of originality and creativity is common practice throughout Jurassic World Dominion. It’s a movie that features dinosaurs roaming the planet and humans forced to live alongside them, but the best it can come up with in terms of showing this is a black market where they make the dinosaurs fight – and they also sell them, but again, that reality was established in Fallen Kingdom with its surprisingly interesting auction sequence. A huge world to explore and the film coalesces into a film about a corporation trying to play God and people having to escape from another park made specifically to house dinosaurs.

The difference with this escape from a park instead of the millions of other times this happened is it features a cast composed of Jurassic World characters and Jurassic Park alumni. Neill, Dern, and Goldblum all return from the original films (BD Wong never left) along with the cast of Pratt, Howard, and Sermon. Neither particularly stand out, though it does feel like Goldblum and Dern step more into their roles a little better than Neill who seems uninterested in everything going on. Meanwhile, Pratt continues to be some boring mix of sarcasm and action star that never quite meshes with the film and drains all chemistry between other actors, while Howard continues to be the better of the two and provides some heart with the perpetual action.

Jurassic World Dominion does introduce excellent new characters though, each one far more interesting than the returning characters. DeWanda Wise is easily the most charming addition as the roguish Kayla Watts and steals every scene she’s in with strength and charisma that sells her as a better lead than the bland Owen. Mamoudou Athie is immediately endearing as Biosyn employee, Ramsay Cole, and he bounces nicely off of Campbell Scott’s delightful restrained panic as Biosyn CEO Lewis Dodgson. They’re far better than the movie that they reside in, but Wise in particular feels like she could carry an entry in this franchise far better than any of her co-stars have done.

What’s a shame is that Dominion does bring all of these characters back and all you want to do is go on an adventure again with them. But one focused on dinosaurs. Not one about locusts eating crops and not one about human clones when dinosaurs are right there. It feels like Trevorrow wants the film to feel lived in and that dinosaurs coexisting with humans by this point is old hat. However, the story it tries to tell needs to be something that naturally brings the characters together and not through happenstance. Most of all, it needs to capture the climate of the world it’s presenting – dinosaurs are still a topic of discussion and the film never stops beating the drum that humans need to learn to live with dinosaurs. So it should have shown that and not isolated them to a montage, one black market, and another dinosaur sanctuary.

Jurassic World Dominion just doesn’t seem to know how to be any of the things it wants to be. It hangs its hat on a plot point (a human clone) from Fallen Kingdom that I doubt anyone even remembered or cared about as much as “We made a new dinosaur” or “We’re now auctioning off dinosaurs to other nations where they will likely become weapons of mass destruction”. It’s a fundamental misunderstanding of the franchise’s draw and why audiences were enamored in the first place with the 1993 film. The decision to essentially sideline the one dinosaur we’ve spent the entire franchise with, Blue, demonstrates this completely. A colossal misfire that brings the franchise to a close with a whimper.

20 Years Ago: The Bourne Identity Stood Against the Grain