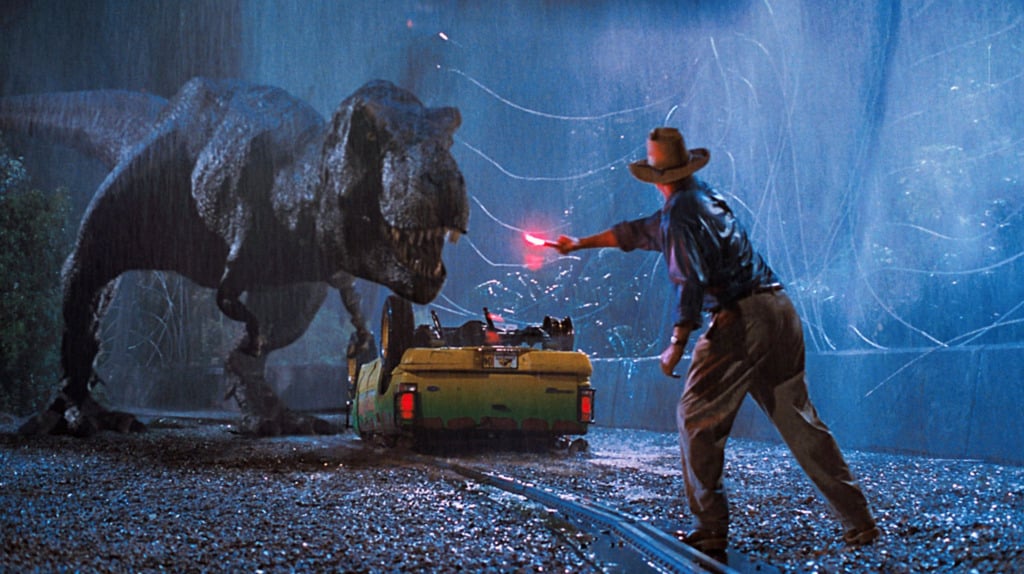 Looking back at the fantastical adventure film that spurred a franchise

As far as directorial triumphs go, the fact that Steven Spielberg released both Schindler’s List (1993) and Jurassic Park (1993) in the same calendar year is quite the feat. Remarkably, it speaks to his testament as a filmmaker that he had the ability to weave a heart-wrenching, sprawling Holocaust drama, then simultaneously switch gears to direct digital dinosaurs.

Dreaming beyond your means is arguably what Spielberg does best.

In fact, Spielberg’s career has had constant shifts in genre and mood. His latest effort, Ready Player One (2018), rendered mixed critical success, but the subject of the film alone shows Spielberg’s strengths as a storyteller: one of a boy escaping his circumstances through imagination. This theme is a line that runs through the majority of his filmography, in everything from Saving Private Ryan (1998) to ET: The Extra-Terrestrial (1982). War heroes and suburban children of divorce both rise to challenges that seem impossible. Whether the main character is rescuing a soldier in danger or returning an alien to his home planet, they reach their goal through sheer will and strength of heart.

Admittedly, this sentiment might seem heavy-handed, but dreaming beyond your means is arguably what Spielberg does best. It’s what led to the Best Picture winner about remembrance bringing audiences to tears six months after a thrilling dinosaur romp terrified the same crowds — an innocuous romp that captured the imaginations of adults and children around the world, sweeping in a blockbusting $1 billion worth of ticket sales.

The majority of Jurassic Park spends time establishing the characters and their differing moral philosophies.

In a flurry of violence, Jurassic Park opens with a velociraptor tearing a (probably underpaid) park employee to shreds. Comparatively, the majority of the rest of the film spends time away from the dinosaurs, establishing characters and their differing moral philosophies.

Paleontologist Dr. Alan Grant (Sam Neill) is recruited as an expert to sign off on the safety of the prehistoric island, as is his partner Dr. Ellie Sattler (Laura Dern), a passionate paleobotanist. Neill brings a likable charm to the bemused everyman of Alan Grant, but Dern undoubtedly steals the spotlight in a slew of scenes — namely in response to Dr. Ian Malcolm (Jeff Goldblum at his best), as he waxes poetic on the nature of evolution: 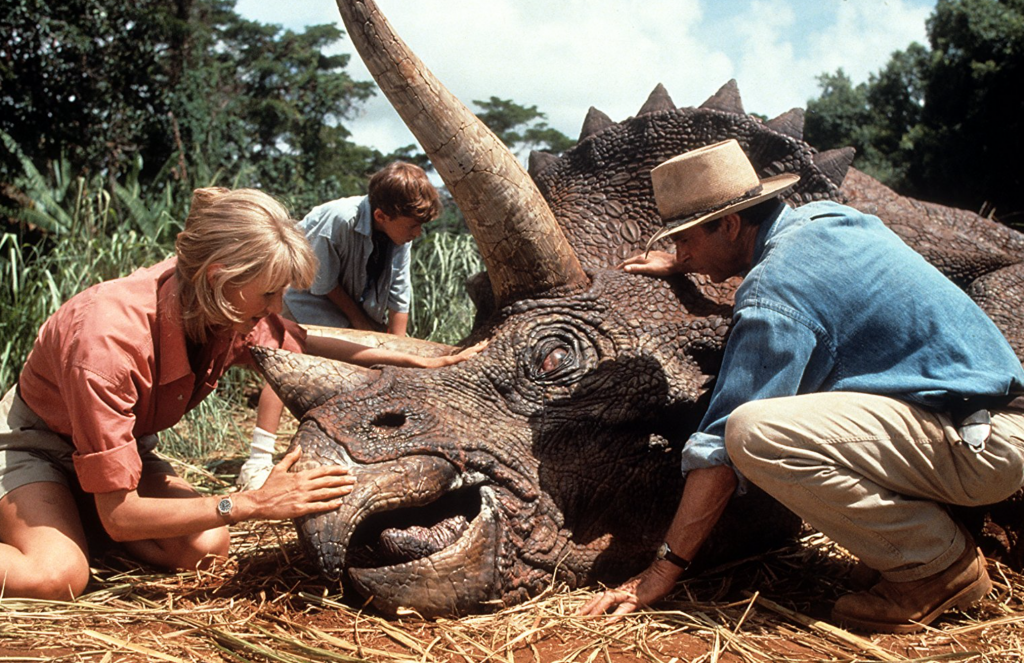 Jurassic Park is about more than just a raptor’s wrath; it’s a cautionary tale about the greed of men.

Park proprietor John Hammond (Sir Richard Attenborough) plays a key role in bringing the cast together. While his charismatic presence and love for his grandchildren, Tim (Joseph Mazzello) and Lex (Ariana Richards), prevent him from becoming a nefarious caricature, an undeniable hunger for legacy and prestige shines through in him. Indeed, Jurassic Park is about more than just a raptor’s wrath; it’s a cautionary tale about the greed of men.

Dennis Nedry (Wayne Knight) is Hammond’s foil, a slapstick-y slob with baseless integrity. The prattling technician is intent on exchanging dinosaur embryos for cash-filled briefcases. Though opposed in personality, greed makes Nedry and Hammond reluctant bedfellows as cautionary figures in Spielberg’s tale. There are repeated warnings against the scope of the park’s operations, and contempt for the careless way Hammond plays with nature, prompting Malcolm to posit: “your scientists were so preoccupied with whether they could, they didn’t stop to think if they should.” 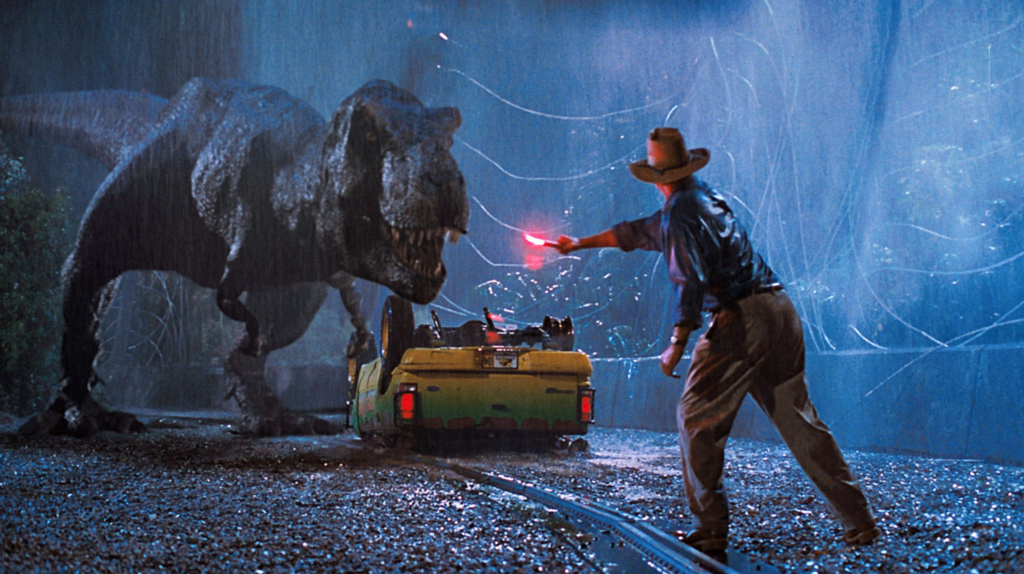 The artistic merit of the Jurassic Park sequels will always pale in comparison to their predecessor.

Consequently, Malcolm could direct the same statement towards Hollywood’s current penchant for rebooting blockbusters of years past, including the series Jurassic Park itself would spur. This franchise would go on to span multiple decades with continued relevance. In fairness, though the sequels have garnered middling critical reviews, the reboot/sequel, Jurassic World (2015), was a financial success. It also renewed long dormant audience interest in the Jurassic Park universe.

Ironically, the latest addition, Jurassic Park: Fallen Kingdom, roped Goldblum himself back into the franchise, so perhaps Dr. Ian Malcolm is no longer as concerned about the quandary of creating things for creation’s sake. The sequels have their moments, but the artistic merit of the later films will always pale in comparison to their predecessor.

There are countless reasons filmgoers remember Jurassic Park as an exceptional summer blockbuster.

Truthfully, though nostalgia may add an ounce of personal affection for the original film, there are countless reasons filmgoers remember Jurassic Park as an exceptional summer blockbuster. It has a lot of elements that make it more complex than a run-of-the-mill monster movie. It is a meditation on the arrogance of humanity, as well as a survival thriller with a touch of bathroom humour. It invites reflection, such as when Sattler reprimands Hammond for his failings, and elicits a jolt of fear as a T-Rex fills the view of a car mirror that warns “objects in mirror are closer than they appear.”

Audiences care about whether the cast will make it off the island because Spielberg invests the time to create relatable characters. The chase sequences and raptor attacks are earned after a slow build up of suspense that is entirely worth the wait. Sequences of wonder are underscored by a grand symphony fine-tuned by Spielberg’s dependable composer, John Williams. Additionally, it is a testament to the craftsmanship of the practical and digital effects team that the graphics still hold up twenty-five years later.

Many present-day blockbusters have become overly reliant on computer-generated imagery to the point of excess; in modern Michael Bay films full of robot fights and massive explosions, it’s hard to suspend your disbelief and prevent your eyes from glazing over. A marriage of practical and special effects — exemplified perfectly in Jurassic Park — presents a mixture of movie magic that feels real and spectacular all at once.

Themes of caution work in tension with a childlike pursuit of realising the impossible.

Impressively, Jurassic Park is not just forward thinking in terms of future blockbusters, but a film entrenched in meta foreshadowing. The blockbuster would produce its own merchandise and amusement park rides full of flaming torches and thrilling flume drops. Its continued influence today is due to its qualities as a truly iconic science-fiction film. It is contemplative. It is terrifying. And most of all, it’s fun.

All things considered, Jurassic Park succeeds due to its themes of caution working in tension with a childlike pursuit of realizing the impossible. Future sequels and remakes would do well to return to the film’s key ingredients of originality, curiosity, and sense of adventure. After all, filmmaking at its heart is meant to create a wondrous escape from reality.

30 Years Later: ‘Bull Durham’ Swings for The Fences and Knocks it Out The Park

‘Incredibles 2’ Is a Worthy Sidekick to the Original