Among the many successful Pixar films, The Incredibles (2004) ranks in the upper echelons. If it’s not quite a masterpiece of the form, it’s certainly one of its defining statements. So it’s a bit puzzling that Disney and Pixar, which have managed to make three Toy Story films, two Nemo movies, and way too many Cars sequels, are only now releasing Incredibles 2, fourteen years after the first. The delay is attributable to auteur Brad Bird, who initially refused to write a sequel until he had something that could top the original. Bird — who also directed — doesn’t succeed at his own goals; Incredibles 2 isn’t as charming or emotional as the first one, but he has still managed to craft a compelling, breezy follow-up that boasts some of the most gorgeous visuals in all of animation.

Despite the fourteen year gap between releases, only a few months have passed in the story since the conclusion of the first film. The Parr family is living a motel after their house was destroyed, and their already fragile living situation is further upended when the family of heroes intercedes (against the law) against a villain with a drilling fetish: the Underminer. His giant drilling rig creates havoc across the city, threatening to crush pedestrians and collapsing a major bank, yet the Incredibles aren’t able to stop him. They’re not used to working together as a family, and the need to integrate the children while still taking care of baby Jack-Jack leaves them at a disadvantage. They add to the destruction of the city without even capturing the bad guy.

Dispirited, they return to their motel to find out that thanks to their newest escapade, the program that has kept them afloat is about to be cancelled. Still, there might be away to keep themselves busy — and maybe even convince society that they serve a public good. Winston Deavor (Bob Odenkirk) reveals himself as the heir to a deceased benefactor of the classic school of superheroes, those who fought crime even before the Incredibles were in business. He and his sister, Evelyn (Catherine Keener), are looking to rehabilitate the public image of superheroes by documenting their exploits in minute details through body cams attached to their costumes. Average citizens will be able to view their heroics up close, reminding them just how important masked crusaders really are. 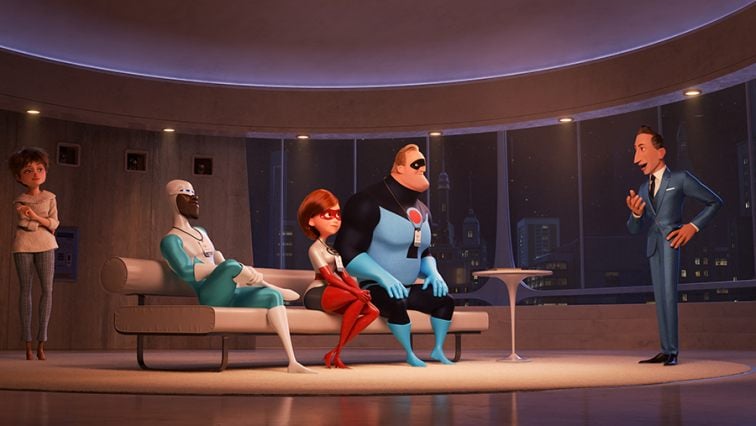 It doesn’t take much to convince Bob (Craig T. Nelson), but when Helen (Holly Hunter) agrees, it upsets their domestic world. Because of insurance rates, the much less destructive Elastigirl will have to work on her own, leaving Mr. Incredible to stay home with the kids, including baby Jack-Jack, whose newly-developed powers are more than Bob can handle. He envies Helen’s return to crime fighting, but her comeback isn’t without hitches: a new villain, the Screenslaver, has appeared. They create mayhem by hacking computer screens in order to hypnotize anyone who sees them, and the prime target seems to be Elastigirl.

Viewers might wonder how it is that every battle in Incredibles 2 manages to happen right at dusk, but it’s most likely just a vehicle for Mahyar Abousaeedi’s astounding cinematography.

The Incredibles’ escapades provide for some expectedly exhilarating visuals, but it’s Bird’s way with dialogue that elevates Incredibles 2 over some of its animated forebears. Pixar films have an unfortunate habit of letting astounding visuals make up for merely passable screenplays (see Coco), but Bird crafts a compelling family and calibrates his language to find a sweet spot that’s witty enough for discerning adults yet still intelligible for most of the film’s inevitable child audience. He’s at his best when focusing on domestic drama, like Mr. Incredible’s total lack of preparation for helping his children with their homework and soothing the baby to sleep. 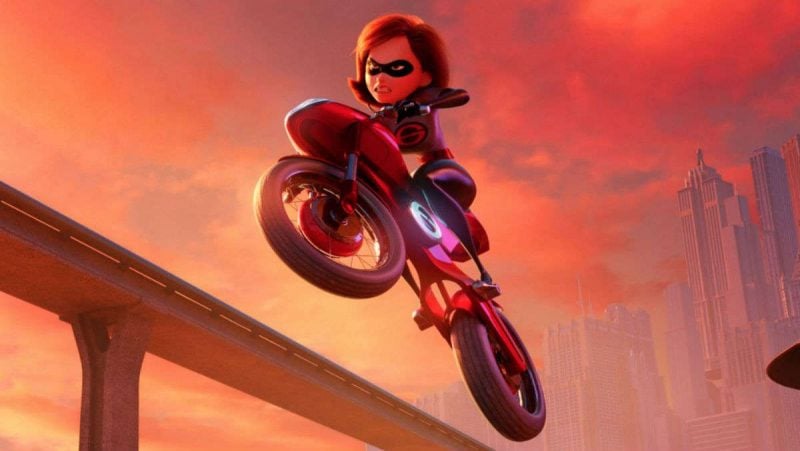 That’s not to say that the images in Incredibles 2 take a backseat. The film doesn’t feature the kaleidoscopic colors that so enlivened Coco or the Nemo films, but it excels at creating beautiful images within a more realist template. Viewers might wonder how it is that every battle in Incredibles 2 manages to happen right at dusk, but it’s most likely just a vehicle for Mahyar Abousaeedi and Erik Smitt’s astounding cinematography. Smitt in particular paints with a lovely pallet of golds and crimsons and purples that make Incredibles 2 perhaps the best looking of all the Pixar films. The ‘50s-era decorations also draw connections between the film and classic cinema of decades past. Michael Giacchino’s striking, space-age, big-band jazz score further complements the retro vibe. Giacchino has long had a preternatural ability to craft themes and melodies that elude most other film composers, and his talents are on full display here. (Hopefully someone will write a Chinatown-style period film noir for him to further develop these moody tendencies.)

As rapturous as its use of color is, parts of Incredibles 2 end up feeling like retreads of the first film. Despite his determination to only craft an experience that outdoes the original, this work only intermittently reaches the heights of the first. There are also complicated political questions that Bird raises, but doesn’t satisfactorily deal with. Elastigirl’s use of body cameras to show the public what it’s really like to be a superhero brings to mind the recent use of body cams by police officers, but rather than highlighting injustices committed by those with power and immunity, Elastigirl records herself to show the righteousness of her actions. It’s hard to believe that Bird wouldn’t realize the darker references his film makes, and its lack of commentary on an issue it raises is disconcerting. Bird is also a bit clumsy when plotting out Elastigirl’s place in the world as a working woman. Too much of the movie’s conflicts can be read as a consequence of women entering the workforce — probably not a message he intended to broadcast.

Clumsiness aside, Incredibles 2 is a sequel that justifies its existence. Not an astounding work, it’s instead merely a film made competently and compellingly, but sometimes that’s all it takes.

Jurassic Park Still Towers Over its Sequels in Imagination, Contemplation, and Blockbuster Fun