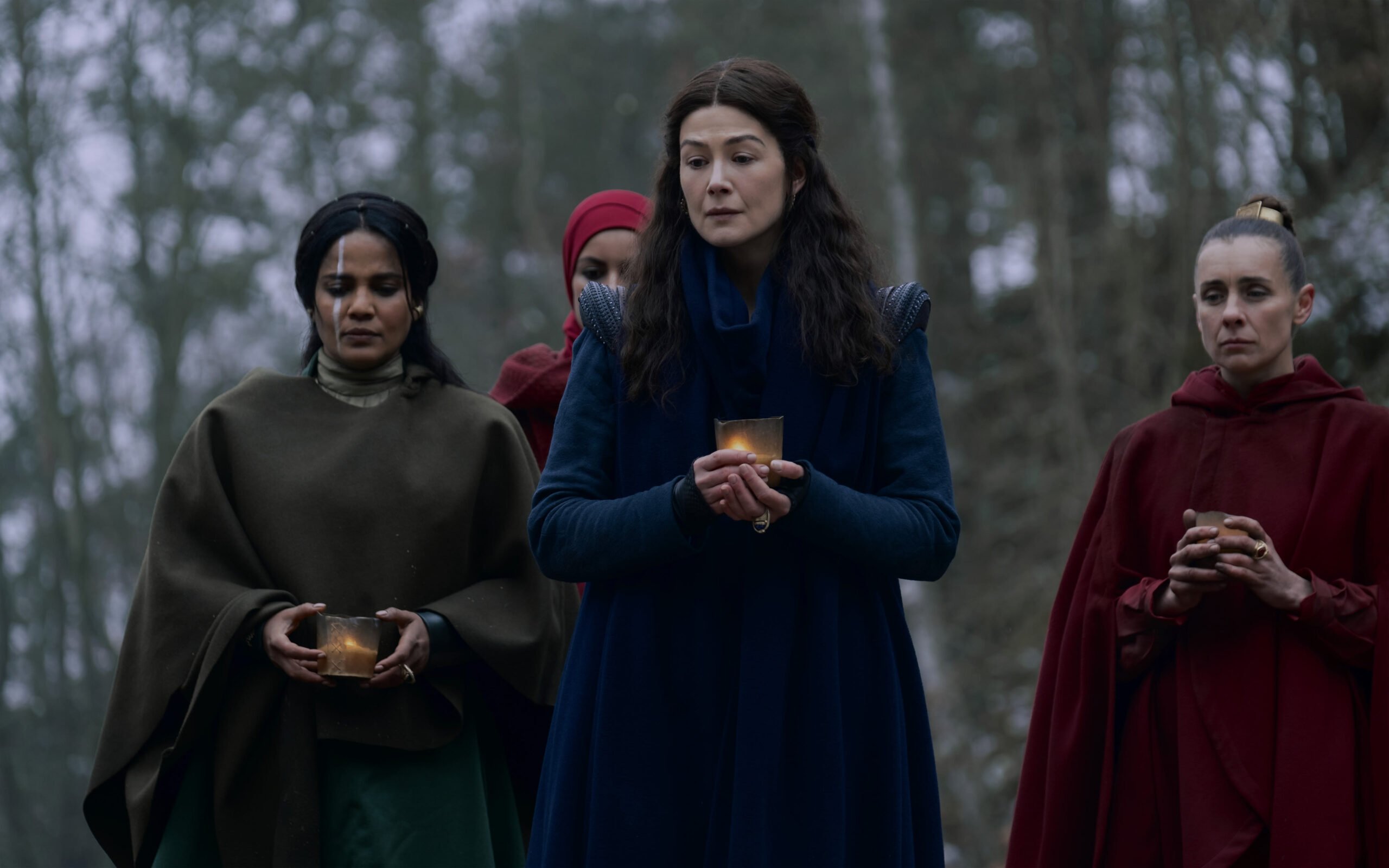 The Wheel of Time is back with another episode and this time it’s not pulling any punches. This week’s installment, “Blood Calls Blood,” had less action than “The Dragon Reborn,” but that doesn’t mean it was any less harrowing. If anything, the stakes were even higher for our group of favourite travellers.

The episode continues where episode four left off, with the sister of the Aes Sedai burying their dead brethren. Stepin (Peter Franzén) mourns profoundly and completely for his bonded partner—and lover—Kerene Nagashi (Clare Perkins). It’s a cold open that hits you right in the gut and sets the tone for one of the series’ heavier episodes.

Following the credits, we’re told that a month has passed since the battle between the Aes Sedai and the False Dragon, Logan Albar (Álvaro Morte), and the group has finally reached the White Tower. Moiraine (Rosamund Pike) and Lan (Daniel Henney) discuss the fate of Nynaeve (Zoë Robins), who is as distrusting of the Aes Sedai as ever but who’s now the object of their conversations. Once they get to the White Tower, Moiraine promises Nynaeve that she’ll find her friends if they’ve also made it to the city.

Outside the walls of the White Tower, Rand (Josha Stradowski) and Mat (Barney Harris) have made their way into the city, but it’s clear it’s come at a cost. Mat is unwell and seems erratic. We learn that his dreams have continued and Rand is worried that Mat might be able to channel the One Power. Although this would be a cause to celebrate if he were the Dragon, it’s clear that being so close to magic is turning him into someone—something—else. Mat also questions whether he, or the Fade, killed the farmers they stayed with before they were ambushed, and he’s convinced that Thom (Alexandre Willaume) has been murdered since it’s been a month since they’ve seen him. They then watch from a balcony as the False Dragon is paraded through the streets by the Aes Sedai returning home from battle.

We then cut to the adventures of Perrin (Marcus Rutherford) and Egwene (Madeleine Madden) who have also ventured to the White Tower, only they’re outside the city walls and have been voyaging with the Tuatha’an. Unfortunately, the caravan is stopped by the Children of the Light who demand the Tuatha’an hand over Perrin and Egwene. The Tinkers try to stop the Children of the Light as Aram (Daryl McCormack) helps Perrin and Egwene escape, but he’s knocked unconscious by Child Vlada (Abdul Salis) who takes them to question them. He tortures Perrin in front of Egwene and says that if she casts, he’ll kill her but let Perrin live, but if she should fail to cast then he’ll be slowly killed in front of her. She ends up casting a small fire that sets Perrin free of his bonds. As he gets up, his eyes change colour and he growls and Child Valda asks what he really is. Egwene stabs him and she and Perrin run as wolves—the same ones as before and here to rescue the duo—attack the camp.

Back at the White Tower, Stepin visits Nynaeve for a sleeping potion. He’s been taking the death of his lover hard and she worries about him. He asks her for a sleeping tea, which she gives him gladly thinking it will help him (finally) get some rest. Unfortunately, he uses it to put Lan asleep—who’s been watching over him during this period of mourning—and kills himself. Lan and all the Warders and Aes Sedai in the White Tower have a funeral for Stepin and the episode ends with Lan screaming over his friend’s body, overcome with grief.

The Wheel of Time is a series that started strong and keeps getting stronger. There were plenty of opportunities for them to take this episode in the wrong direction. They could have been overly graphic with the torture of Perrin, they could have been brutal with the treatment of the Tuatha’an by the Children of Light, and they could have made Mat’s slow descent into madness an extravagant or over-the-top affair. But they didn’t.

They also could have easily treated Stepin’s depression over the death of Kerene as a caricature of mourning. But the show handled it well and gave us a sense of the overwhelming grief that he was battling with following her passing. It’s clear the only thing propelling him forward in the episode is being able to deliver her ring to the White Tower, and once that’s been completed he becomes a man with nothing left. It’s heartbreaking and visceral and they treated it with the gravitas it deserved to have.

If you haven’t started watching The Wheel of Time we strongly encourage you to give it a view. It’s available to stream on Amazon Prime, with a new episode out every Friday.

The 10 Best Sex And The City Boyfriends Ranked