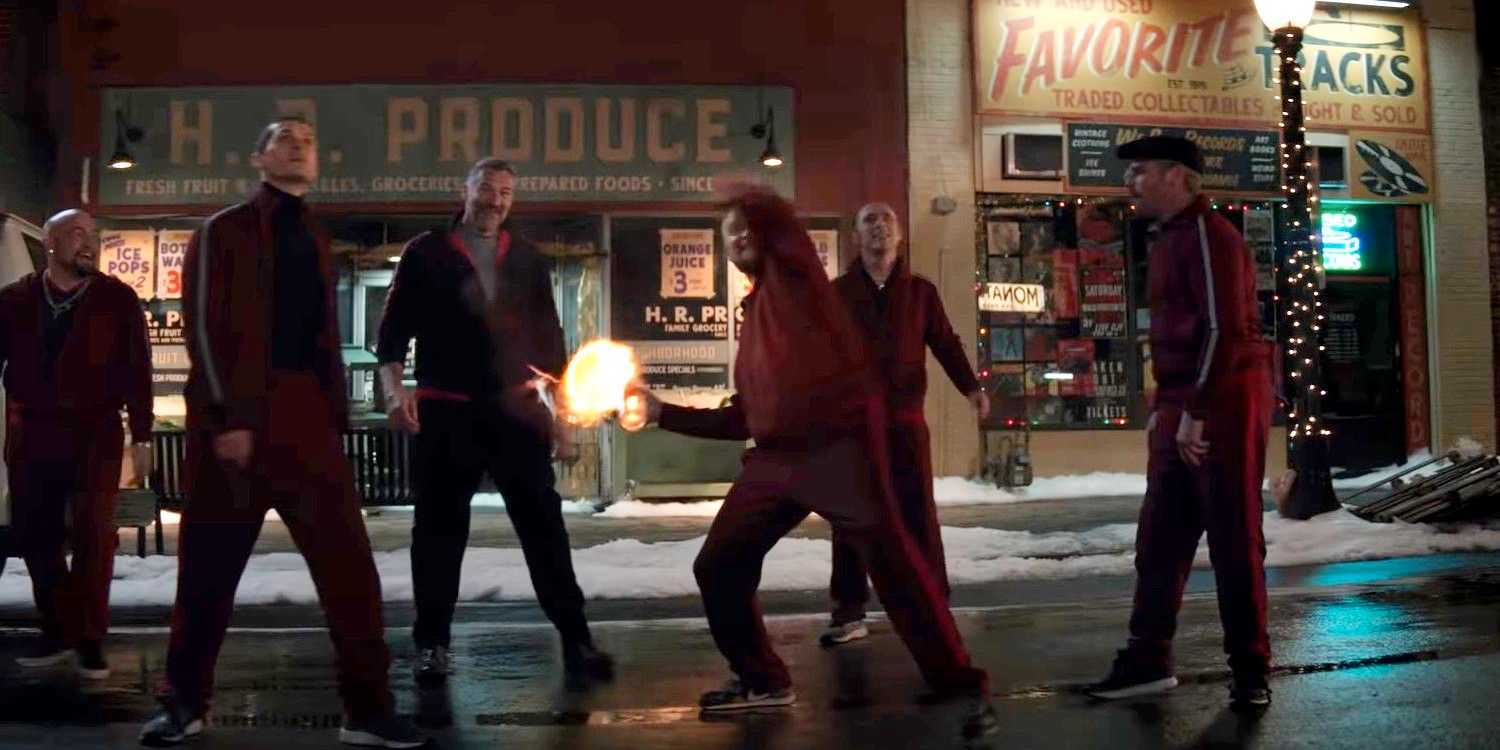 Hawkeye Fights off The Tracksuit Mafia

Hawkeye’s relationship with the Tracksuit….Draculas?

All Clint Barton wants to do is spend Christmas with his family. The Tracksuit mafia has other plans for him. The ridiculously named crime family first appeared in Hawkeye Vol 4 when Clint tried to buy out one of their buildings. They didn’t like his attitude and simply wanted him gone. It’s that simple. There is no major conspiracy involving The Big Three. Just a simple land-grab involving organized crime. Hawkeye first dubbed them the Tracksuit Draculas due to their vaguely Eastern European accents and attire. Also, they have a penitent to use the word “bro”. The comics use this term of endearment when talking to a stranger, mostly Hawkeye. It was less a conscious decision and more likely a filler word caused by a language barrier. The series establishes that The Tracksuit Mafia has a relationship with Ronin, and still makes them a formidable threat to Clint Barton.

The Tracksuit Mafia is More Than a Joke

One of the best things a series can do is take a joke character, like Razorfist, and turn them into a threat. The Tracksuit Mafia come off as laughable at first because they are ripped straight out of a cheesy 80s action film. Except, they have connections, manpower, and are willing to kill innocents. To superpowers like Thor or Iron Man, they are unimportant. But between two fit athletes with a passion for archery, they are a major problem. The series attempts to bring the danger alive, but some of it is lost in translation. There is no big bad or Kingpin. It’s run by a generic scary guy named Ivan. In addition, their love for the word “bro” was used appropriately. The series throws it around like an exploding truck. The biggest change is that Disney+ adds an additional threat: Maya Lopez. She’s not interested in threatening innocents but is out for revenge.

In less than a year Marvel has introduced two deaf characters. Makkari in The Eternals is the first, played by deaf actor Lauren Ridloff. Hawkeye introduced Maya Lopez, aka Echo, played by Alaqua Cox. Echo first appeared early in Daredevil, but fans of the comics may recognize her in The New Avengers when as the first Ronin. There are quite a few differences between print and screen. In the latter, her hatred for Hawkeye stems from his knowledge of Ronin and his whereabouts. Little does she know that the two are one and the same. Clint Barton targeted the Tracksuit Mafia after he lost his family and became a death seeker. unfortunately for him, one of their members happened to be Maya’s father. Instead of putting on a mantle of a bat and fighting crime, she became the head of the Tracksuit Mafia. Though her rise to power is not fully revealed, her grudge is plain to see.

One of the biggest difficulties when translating a comic to the bigger screen is deciding what needs changing. In the comic book run, Hawkeye is a bachelor living in an apartment reflecting on his life, working with the other Hawkeye, and fighting the Tracksuit Mafia. The Disney+ series shows him as a happily married man, trying to get home for Christmas. In both instances, he mentors Kate Bishop and fights the Tracksuit Mafia. But his relationship with the goon squad is vastly different. Which one is better? There’s no good answer to that question. Though both interpretations are based on the same characters, it would be too difficult to bring everything from the comic book without contradictions or stuffing the show with unnecessary padding. Giving more deep-state sinister motives to them by adding Echo does not make them any better or worse, just different.

“Blood Calls Blood” a Harrowing Episode of The Wheel of Time