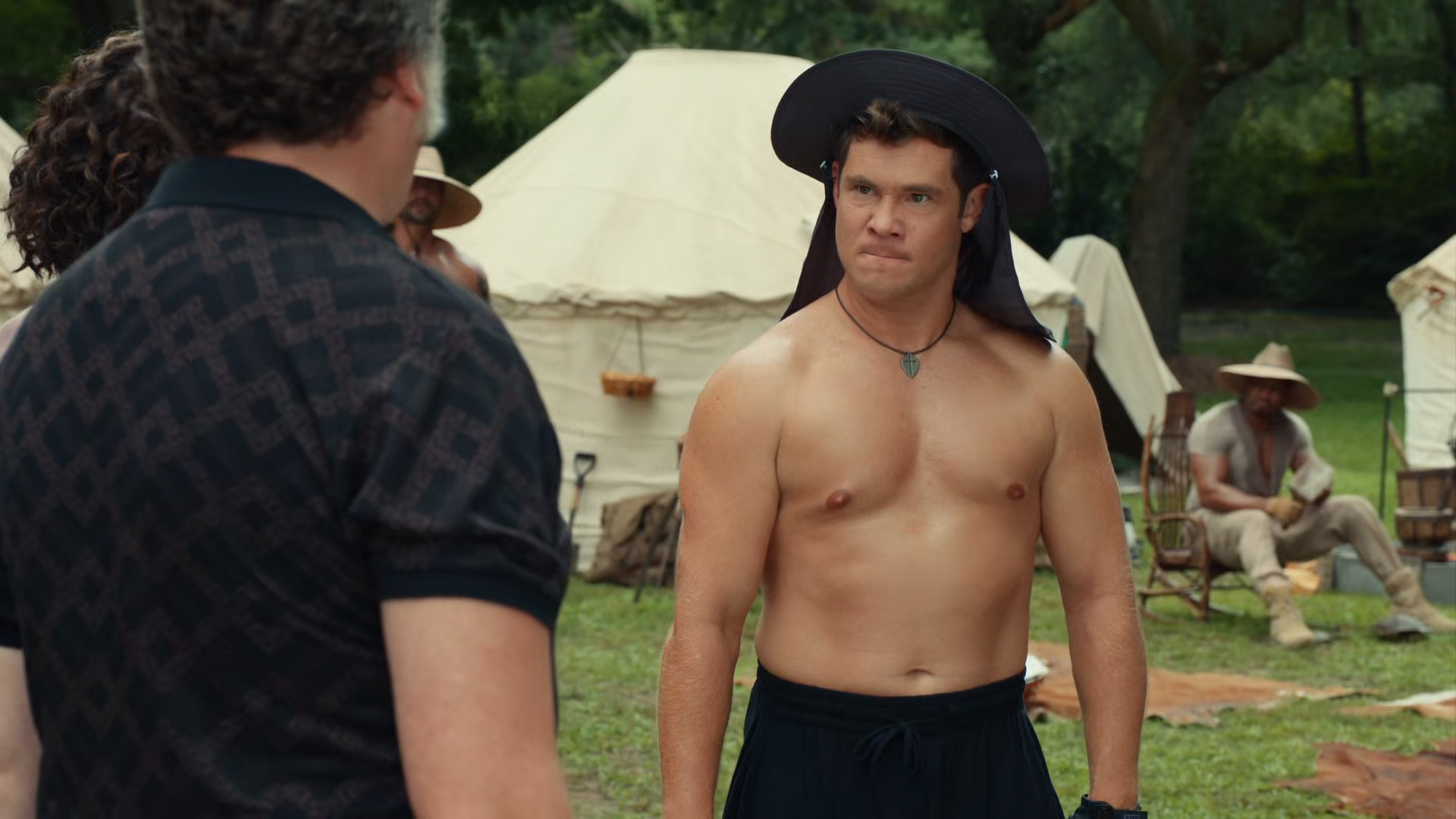 After a double feature season premiere catching us up with the Gemstone family, “For He Is a Liar and the Father of Lies” is a much more focused episode, basically dropping any plotline not involving Eli and Kelvin to tell a story about expressions of power, and how it defines those who attempt to wield it. And although it delivers the hilariously vulgar goods we expect from The Righteous Gemstones, “For He Is a Liar” is not an episode that will be particularly remembered in the annals of history; however, it does stand as an important moment for the series as it shifts tones and narratives in its sophomore year.

Much like last season, “For He Is a Liar” does not waste time drawing out plot points; after ending on what felt like a huge point of conflict between father and children (both of whom arrived at Eli’s house covered in varying amounts of blood), the whole story is basically wrapped up by the end of the half hour. At first glance, this really feels like underwhelming storytelling; not only is the reveal of Junior as Thaniel’s murderer rushed, but it thoroughly undercooks any sense of friction between two sets of guilty parties who don’t realize they’re hiding different things from each other.

Look to the other half of the episode, and it also seems like The Righteous Gemstones is just burning through something it’s half-interested in, with the continued homoeroticism underlining everything Kelvin does, now taking the shape of the Big Buff Christian Boys (excuse me, God Squad). Save for a series of running jokes about dudes working out and Keefe’s obsession with the Gemstone that saved him, that half of “For He Is a Liar” feels particularly thin, trying to establish a conflict between Kelvin and a character (Titus) we’ve never seen before.

And yet – “For He Is a Liar and the Father of Lies” is decidedly more than the sum of its parts, a story of two men realizing there’s a lot more of the world they can’t control outside of the Gemstone compound. Though B.J. makes a big deal out of Eli riding The Exodus over and over again for the wrong reasons, it is still a strong metaphor for Eli trying to ground himself; doing something where there are no variables, no outsized expectations… and no surprises, especially the kind that end up with a dead journalist burning inside a five-alarm cabin fire.

Jesse, of course, is feeling dissent in his ranks, as the workout bros he’s corralled into his totally-not-a-cult are losing faith in the mission to… look really strong and inspire people to Christianity? When Titus speaks out against Kelvin’s mandatory Bible study time, Jesse finds both a challenge to his masculinity, and a vector to feed the anxiety he’s feeling about his father’s potential status as a murderer. Or in other words, a “perfect storm for a rich boy tantrum”, which we experience in the moments between the siblings clumsily putting together the various strange elements surrounding the events of “After I Leave, Savage Wolves Will Come”.

Where it becomes interesting is where it ultimately resolves – or more accurately, backs away from resolution in its final moments. Though both Eli and Jesse are able to hold off their nemeses in the short term, that victory will clearly come at a future cost; and while the “how” of that remains a mystery, how The Righteous Gemstones teases those impending, unseen conflicts, is easily the most exciting part of the episode (most of the rest of which is spent working within familiar rhythms and gags, like Jesse unnecessarily pushing through his siblings or Judy imitating her siblings to be one of the boys in front of Daddy). Where last season mostly presented conflict in the form of internal sources (using Scottie as a bit of ignition fluid, when necessary), season two is much more external with its dramatic sources – which in turn, stand to enhance the tragic portrayals of those within the Gemstone family.

And though this episode does drop entire other plots (where the FUCK is Baby Billy, and when are we going to follow up on Judy’s burgeoning Christian pop career) in a way that is initially frustrating, establishing some emotional parallels between Eli and Kelvin is important in continuing to add texture and dimensionality to The Righteous Gemstones world – one that McBride has talked about being potentially longer and more expansive than his previous efforts.

Where it ends, by neatly closing off the Thaniel Block murder mystery, is an exciting place: as the first season showed, Eli’s bound to lose control a bit when things start to fly off the rails, and he can no longer control the world around him – something he’s been a bit obsessed with since the passing of Aimee-Leigh. And how it does this almost doesn’t make sense out of context; but only The Righteous Gemstones could anchor an entire plot around a scrotum shaving mishap (please give me a video of Edi Patterson saying “saggy ball bag” on repeat), and have it be a moment where its plot blossoms, rather than contracts for the sake of some testicular humor.

Since the Gemstones are (mostly) false Christians, it makes sense that “For He Is a Liar and the Father of Lies”, and Gemstones as a whole, is never willing to sacrifice anything; despite this episode’s slight case of tunnel vision, it is clear there is no bit of story (or humor) being wasted – though the details of Eli’s almost sexual encounter are mostly played for laughs, Kelvin’s immediate rejection of his father seeking solace in the arms of another is important, both to the Gemstone legacy and how this show finds new friction between siblings and father. Though this season is playing very close to its chest where it’s going, “For He Is a Liar” opens a world of potential for the seven episodes remaining this season to follow.