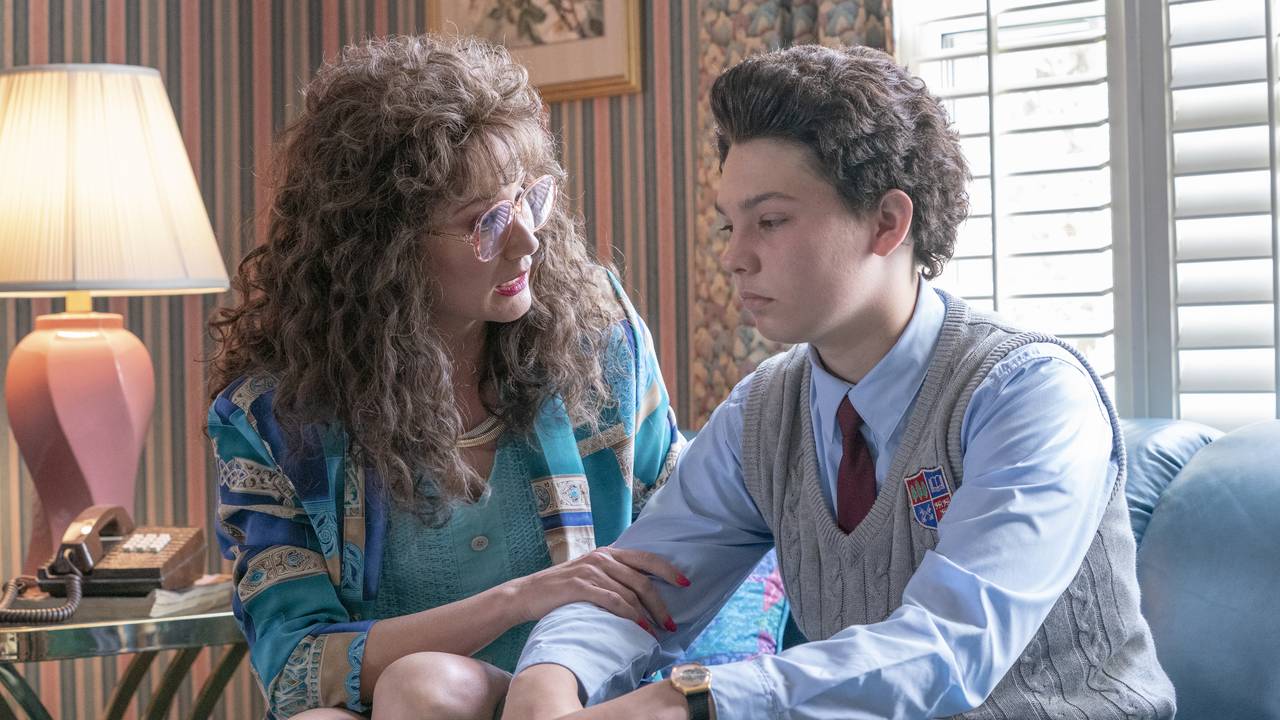 One of Peak TV’s most pervasive trends is an addiction to the flashback episode – what was once a silly device to fill episode requirements on long-running comedies became essential backbones to modern dramas. Propelled by shows like LOST and Orange is the New Black, which utilized frequent, lengthy flashbacks to build out its array of characters, the last few years have seen an uptick of these “retro” episodes – from Arrow to Westworld and even Carnival Row, modern shows have a penchant for self-indulgent episodes full of wigs and retro fashion. And while “Interlude,” The Righteous Gemstones‘ best episode yet, initially feels like another one of these unnecessary digressions, by the time it reaches the stunning conclusion of its 40-minute running time, it firmly establishes itself as one of the best episodes constructed in this very specific, suddenly popular mold.

As “Interlude” slowly lays out the many personalities and loyalties in Aimee Leigh’s life, The Righteous Gemstones begins to build out some of the more meaningful, contemplative ideas teased in its earlier episodes.

Where most flashback episodes fall apart is their sense of self-importance; what “Interlude” understands is that it is possible to recreate a moment in the past without having to build some sense of mystery around it. “Wicked Lips” already gave us the foundation of the central conflict between Eli and Baby Billy, which means “Interlude” exists simply to give context and texture to stories and people we already understand. Billy’s opportunistic ways, Eli’s disgruntled sense of self, Judy’s strange, unappreciated uniqueness… all of these elements are well defined in the first four episodes of the series, and “Interlude” smartly doesn’t try to play coy with these long-festering conflicts.

Centered around Aimee Leigh discovering she’s pregnant with Kelvin, “Interlude” is a careful observation of the ripple effect the news sends through the family. In doing so, The Righteous Gemstones goes through a radical emotional shift; rather than just being a black comedy about a falling evangelist empire, “Interlude” reveals a deeper, more complex emotional core to the young comedy – so much so, it almost feels like a different series, the humor of “Interlude” often taking a much subtler route than the abrasively juvenile style of the opening episodes.

But as Eli said, change takes time to understand; as “Interlude” slowly lays out the many personalities and loyalties in Aimee Leigh’s life, The Righteous Gemstones begins to build out some of the more meaningful, contemplative ideas teased in its earlier episodes. And it does so across a broad spectrum of characters; Billy’s desperation to stay relevant, Eli’s slow transformation into the imposing figure he’d become, and Jesse’s misbehavin‘ ways are all given voice in “Interlude,” injecting Gemstones with some much-needed emotional depth, which helps deepen the many Biblical parallels Danny McBride and his creative team are beginning to flesh out.

But where “Interlude” surprises the most is with the two OG Gemstone women; both Aimee Leigh and young Judy spring to life as characters in this episode, offering intriguing perspectives on the two “true” Gemstone women. It’s a tough act to nail; Aimee Leigh is essentially the God of the Gemstone kingdom, her absence the foreboding catalyst for the downfall of the evangelical empire -you only get one shot at a first introduction for such an important character, and “Interlude” absolutely hammers it out of the park, as dynamic a combination of writing and performance by (the eternally incredibly talented) Jennifer Nettles.

“Interlude” offers a look at so many different shades of Aimee Leigh; as the family matriarch, the famous face of the burgeoning Gemstone empire, a sister, and a woman in her 40’s facing a difficult, unexpected pregnancy. In an episode with a lot already on its plate, the most impressive part of “Interlude” is how her character is brought to life; it’s hard to make a woman who manipulates poor people with cheap platitudes and displaced righteousness, but goddamnit, “Interlude” does it with nuanced grace, a highly unexpected (but entirely welcome) turn that nonetheless helps the many plot threads of the series find their harmony.

I mentioned Judy as another highlight; perhaps this one is more personal, as a one-time contender for “child in the family with the weirdest habits,” but where “Interlude” does so well is informing Judy’s character in the present. As the Gemstone family plans the future of their family business, she’s left to sit on the stairs alone, or be admonished for her stranger habits and indulgences; of course, this leads her to lash out, in the form of being an absolute bitch to her guests, during an elaborate birthday party thrown by her parents (perhaps as some sort of compensation for how intentionally excluded she is from the normal rhythms of the family).

That party is the absolute highlight of the episode, the “pushing all the chips to the center of the table” moment for The Righteous Gemstones. While watching Judy piss and moan about the gifts she’s being given, Eli is admonished by his father for the people they’re turning into, tarnishing the humble legacy of their family name with extravagant gifts and exploitative practices. They talk about what Eli’s birthday used to look like (he’d usually get chores off for the day), leaving Eli to contemplate the generational chasm that inevitably forms in families, and how hard it can be to stay eternally loyal to the amorphous, irrational idea of what a family “should” be.

In typical Gemstones fashion, this leads to a drunk Jesse (thanks, Uncle Baby Billy!) getting shitfaced, puking on the hamburger grill while yelling at Eli about pissing on the face of his unborn sibling. But those moments of humor only act to illuminate the deeper conflicts The Righteous Gemstones is beginning to surface, ideas about legacy and loyalty that should illuminate characters like Kelvin, Judy, and Billy as Gemstones moves back into the present, and the temptations of power and money only continue to tear the intergenerational bonds apart.