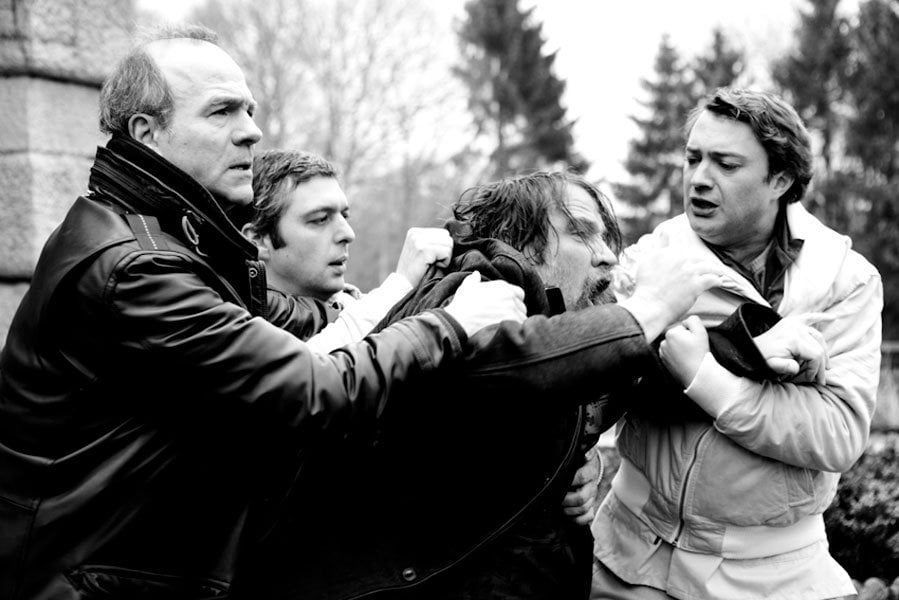 Other than perhaps abortion, no issue provokes as much passionate debate as euthanasia. Of all possible liberties, the “right to die,” as a base concept, stokes personal insecurities and misgivings in a way that can be difficult to quantify. That makes the subject an ideal one for a black comedy, and – at least for its first hour – Kill Me Please seems to offer a take on the subject that is equal parts lampoon and earnest inquiry. That co-writer/director Olias Barco opts for a broader form of resolution is disappointing, but doesn’t completely rob the movie of its peculiar lyricism.

Aurélien Recoing stars as Dr. Kruger, a calm, reassuring figure who operates a high-end assisted-suicide clinic (palace, really) wherein the wealthy can be given an ideal termination experience – for a considerable fee. Though Kruger is the film’s charismatic pro-euthanasia mouthpiece akin to Dr. Kevorkian, the film really belongs to the oddballs who populate his clinic. Among them are Virgile (Virgile Bramly), who first tried to commit suicide at age 7 (“the youngest suicide attempt in France’s history”), Muriel (Muriel Bersy), a wounded lug who “lost” his wife under unusual circumstances, Sylvie (Ingrid Heiderscheit), a transgendered singer, and Mr. Breiman (ubiquitous character actor Saul Rubinek), a Canadian who’s convinced his family that he’s simply on vacation. Further complicating matters is a French investigator (Virginie Efira), who is suspicious of Dr. Kruger’s motives and methods.

Barco and his stars (and co-screenwriters) tread a careful tonal line throughout the film’s first hour; after a shocking opening sequence in which a depressed celebrity reacts badly to the news that Kruger will not take his case on breeds enormous sympathy for Kruger and his understandably jittery staff, Kill Me Please setlles into a much more relaxed set of scenes that establish the fatalistic but not always gloomy atmosphere of the facility. The best of these scenes tend to involve Muriel and Mr. Breiman, whose comic chemistry is palpable, but the film’s most memorable moment comes early: an old man’s “last wish” is made real with the help of a homely young escort, some champagne, and a few choice words. The gorgeous black-and-white cinematography (courtesy of appropriately named DP Frédéric Noirhomme) helps to highlight the undercurrent of finality these characters face without imbuing the proceedings with uncalled-for grimness.

The film’s final act is more in line with past Belgian comic shockers (Ex-Drummer, Man Bites Dog) than the rest of the film, and doesn’t necessarily feel contiguous with the relatively restrained material that precedes it. Yes, the act of violence that shatters a sublime comic moment just after the one-hour mark is an effective shock, but what follows feels like the conclusion of a much less interesting, resonant film than the one we’d been watching up to that point. Still, Barco manages a few nice character moments amidst the carnage, suggesting that all this talk of death never fully mutes these unfortunate souls’ stranger proclivities. Here’s hoping Barco sticks the landing with another film.

Jolt Is Fierce, Feminist, And Powerful for Disability Representation