BlacKkKlansman, the newest theatrical feature from Spike Lee, is remarkable in a number of ways. It’s the beneficiary of an incredible story, the sort of thing you might find too outlandish if it were a work of fiction, it’s blessed with a talented lead cast, and it works from a mostly sharp script. If there’s one way in which BlacKkKlansman is unremarkable, it is in the political content of the film. That’s not to suggest that Lee’s theses are wrong, or that he fails to communicate his politics clearly — neither is the case. But Lee’s intensely political film is simply one (albeit excellent) out of a body of work filled with nothing but political films.

Spike Lee is always a political filmmaker, even when directing some of his less essential comedies. Period pieces like Malcolm X (1992) and Crooklyn (1994) may be bathed in the struggles of the 1960s and 1970s, but they’re intended to speak more to contemporary racial issues than to past ones. BlacKkKlansman alters this approach. Rather than being about sweeping issues, the film works on more of a micro-level; its attacks are levied against specific modern terrorist and racist organizations, namely the Ku Klux Klan and neo-Nazis. Always lurking in the shadows is the possibility (and now inevitability) of Donald Trump’s presidency, which Lee sees as a direct — if delayed — result of the continued existence of the Klan and anti-black racism. Lee has never made a film quite this keyed into contemporary social issues, and so BlacKkKlansman becomes a paradoxical work — one that is both excellent and universal, yet also so specific that there’s an unfortunate possibility that it may come to seem dated in the not-too-distant future. 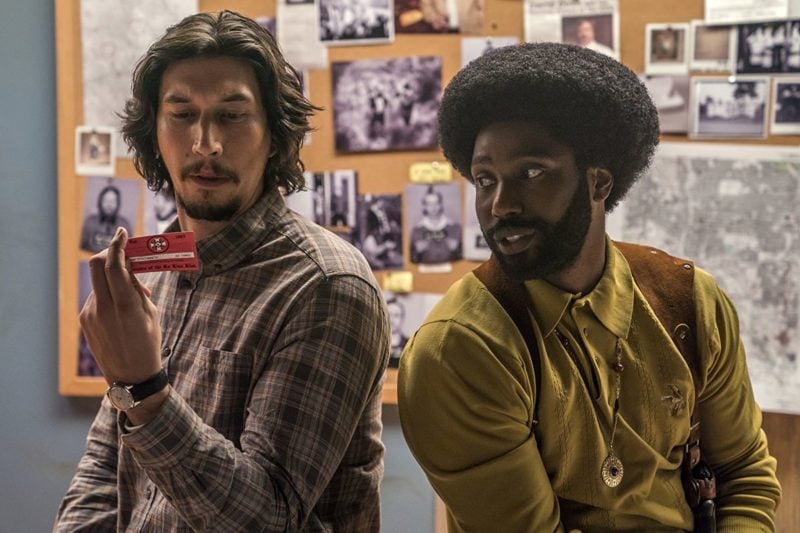 The film’s focus on law enforcement immediately draws the audience’s attention to the plight of black and brown people who have run-ins with the police. Americans have been awash the last few years in videos of police officers brutalizing primarily black men. Whether one views this as the action of a few bad apples, or simply a newly-documented systemic problem, Lee wants us to consider the ways in which the race of police officers affects their professional behavior. Boots Riley, the director of this year’s excellent Sorry to Bother You, spoke for a collection of critics and viewers uninterested in the stories of any police officers, even going so far as to parrot a conspiracy theory suggesting that the subject of BlacKkKlansman, Ron Stallworth, had invented the whole story, since all records were supposedly destroyed. Yet Lee’s film doesn’t attempt to forgive the sins of police officers. Far from it — he explores the inherent racism, both minor and major, lurking in the previously all-white Colorado Springs police force. That doesn’t disappear once Stallworth joins the department, but he’s nevertheless an important force against the simmering racism. Lee isn’t suggesting that black police officers eradicate racist police forces — merely that they are one necessary tool in that fight.

Just as it’s impossible for Americans to ignore police violence anymore, it’s also not possible to look away from the resurgence of unabashed white supremacists, including the KKK and neo-Nazis. It was easy for many Americans to think that these groups no longer existed in meaningful numbers, yet Lee shows in the film’s somewhat disjointed ending that they never really went away — they just hibernated until the moment was right. BlacKkKlansman‘s KKK members are frighteningly average: they crave social experiences, have wives and children, and enjoy having a few beers with their friends on weeknights. Topher Grace’s darkly comic portrayal of former KKK Grand Wizard David Duke posits him as the original “dapper white nationalist,” one who uses his seemingly wholesome demeanor as a way to sweeten his insidious rhetoric. As the real life David Duke aims to return to public prominence, Lee’s film seeks to prevent anyone from forgetting the roots of Duke’s political beliefs, no matter how much he may have tried to alter them in the subsequent decades. 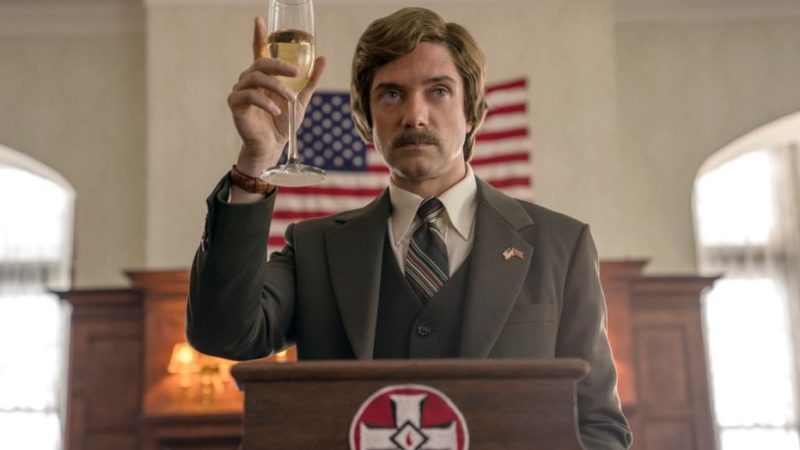 It’s clear that Lee is most interested in having viewers consider the role of police and their connection to white supremacist groups, yet he also peppers his film with smaller connections to our current politics. Stallworth’s police chief, played by Robert John Burke, seems more concerned with the possibility of violence from the Black Panthers and other majority-black organizations, rather than from openly terroristic organizations like the KKK. It’s hard not to think of the FBI’s current monitoring of “Black Identity Extremist” groups. Elsewhere, the chief suggests that many people feel the same way the KKK members feel, and that some man will become president after speaking to their interests. It’s unlikely that anyone ever said anything that blunt to the real-life Stallworth, but Lee clearly intends to connect Donald Trump’s purported racism to that of the Klan. Even white women come in for their own criticism. After Trump was elected president, social scientists and journalist were quick to point out that he lost among women voters — except for white women, a majority of which pushed him over the edge. In Lee’s film, it’s actually the wife of a KKK member who commits the film’s most extreme act of violence. She’s subservient to her husband, and lives in conditions bordering on abusive, but Lee doesn’t find those factors to outweigh her own hate.

Warning — the film’s ending is described below

At a Los Angeles screening prior to the BlacKkKlansman‘s opening day, Lee indicated that the film was rushed through post-production in order for it to be released on the one-year anniversary of the Unite the Right rally in Charlottesville, Virginia, in which a white woman was killed when a white supremacist drove his car through a crowd. It seems likely that his film had an original, much weaker ending (which still exists), but that the events in Charlottesville inspired an additional, more powerful finale. As is, the film seems to end with Stallworth setting up a sting to arrest a racist colleague. The scene’s tone is jarring — it is triumphant, but to such an extent that it almost suggests that everything is as it should be, that the Klan has been permanently destroyed, and soon racism will be eradicated from all areas of public life. Yet when Stallworth returns home, he hears a knock on the door. Checking to see who it is, he heads down the hall (in a shot cribbed from Lee’s own Crooklyn), and sees a cross-burning outside the window, flocked by KKK members, including some of the very people he was investigating. It’s a brutal reminder that this kind of hate hasn’t gone away (contrary to what some viewers and critics have interpreted). 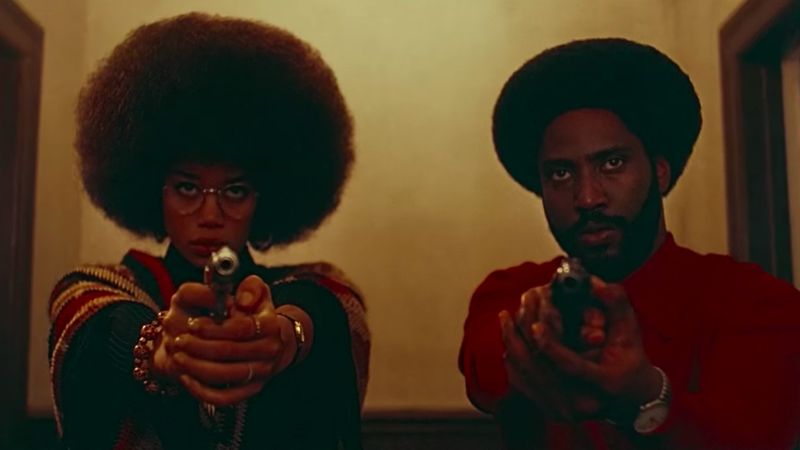 The film ends on grainy footage of the rally in Charlottesville, including the pixelated video of the car brutally ramming into a crowd, orphaned shoes falling off the hood as the driver backs away to escape. The final image is a smiling photograph of Heather Heyer, the woman killed in the attack. In some ways, the ending is unfortunately blunt; if the audience hasn’t already caught on to all the ways Lee is trying to connect his story with the present, they’re either brain dead or asleep. But it’s also moving in a way that doesn’t hurt the overall experience, which relies more on humor than horror. Lee’s film isn’t about Heyer, but she’s a reminder of just how close the hate depicted in BlacKkKlansman can get to us. She’s also a signifier of the great sacrifices that will be made in the quest to eradicate racism and hatred.

These final images, though not shot by Lee in any way, are some of the most powerful portions of the film. It’s the one time in BlacKkKlansman where we are allowed to be completely absorbed in a single story. Even in the most engaging sections of the film proper, the specter of Trump and contemporary race relations is just off in the distance. That hasn’t always been the case in Lee’s work. Rodney King was always meant to be on a viewer’s mind when watching Malcolm X, which Lee filmed shortly after his infamous beating by police, but the film isn’t peppered with winking nods to events that would happen decades later. With these constant interruptions and allusions to the future, Lee prevents viewers from fully engaging with his story. Great, immediate scenes are diminished by their use of this crystal ball. It’s unfortunate that Lee isn’t able to exercise a greater degree of subtlety here. Most of his select audience would have gotten the picture.

From an Old Pioneer to a Modern Classic: Celebrating ‘Hang ‘Em High’ and ‘Open Range’

‘The Ranger’ – A Slasher for the Punk Scene