Connect with us
Fifty years ago, 'Hang 'Em High' steered the American western away from its old-fashioned optimism; thirty-five years later, Kevin Costner's 'Open Range' briefly pointed it back.

Once among the most popular of film genres, the western has mostly been put out to pasture as of late. Like The Searchers‘ Ethan Edwards, it stands on the outside looking in when it comes to today’s major theatrical releases, old-fashioned and uncivilized, as its knightly gunslingers and grizzled outlaws have been replaced at the box office by spandexed superhero studs who offer a more modern, quippier take on pop culture morality. Adaptation is usually the key to survival, and it’s hard to remember that the western used to be a crack shot at this; Clint Eastwood’s Hang ‘Em High and Kevin Costner’s Open Range, both celebrating August anniversaries, provide reminders of the genre’s flexibility in tone and themes. Unfortunately, they also are representative of the difficulties in blazing trails westward when the frontier has all but disappeared. 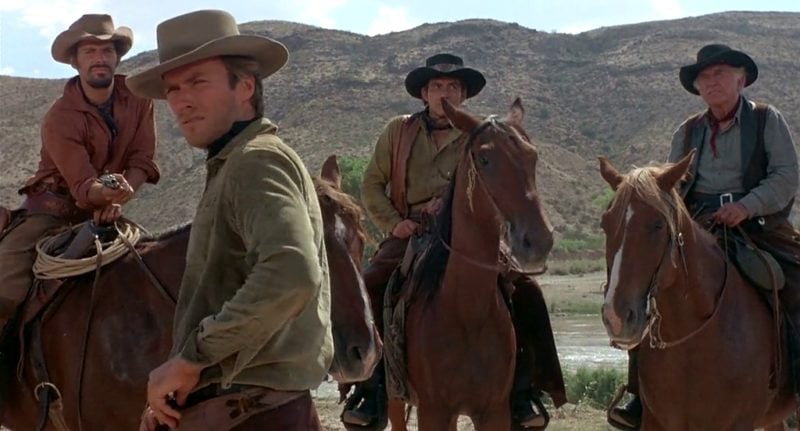 The path was a little clearer for 1968’s Hang ‘Em High; though certainly on the forefront of the surge of revisionist Hollywood westerns to come, it wasn’t the first to ride into undiscovered country. Productions like High Noon and The Searchers had brought the genre into darker emotional regions (though both ultimately retain traditional optimism), and Sergio Leone’s filthy, dust-covered “Man With No Name” trilogy had paved the way for grittier style and moral apathy. Still, Hang ‘Em High can be credited with finding an acceptable middle ground between the clean-cut battles between good and evil of the 40s and 50s classics, and the stark, near-sociopathic denizens that populate the spaghetti westerns.

Hang ‘Em High‘s tale has good guys and bad ones, to be sure, but the differences between them aren’t as clearly defined; you won’t find any purely villainous Liberty Valance or Frank Miller here. Sure, the lynching of Eastwood’s Jed Cooper at the film’s beginning is a cruel act of injustice, as Jed is innocent of any crime, but the perpetrators are acting under a principle that they and many others believe to be socially acceptable in this untamed land where people struggle to make their living: cattle rustling is punishable by death. Unfortunately, the pick-up posse screws up and gets the wrong guy, and even more unfortunately for them, he lives. 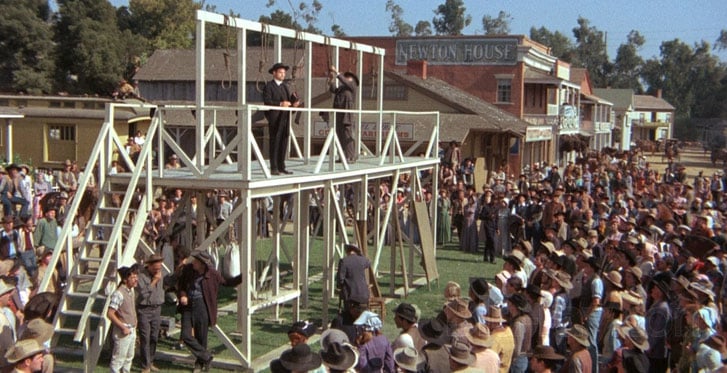 From there, Cooper accepts a post as a Federal Marshall from a noose-crazy judge (based on real-life “Hanging Judge” Isaac Parker) in order to legally pursue his revenge under the guise of justice. Mirroring his desire for blood is Rachel, a young woman victimized and in the midst of her own pursuit, albeit with less freedom or means. Right off the bat, this makes Hang ‘Em High feel a little uncomfortable when compared to its predecessors; vengeance isn’t exactly an honorable pursuit for a cowboy audiences are supposed to root for. Cooper is under strict orders to bring his lynchers in alive, but that’s just for show — a bone tossed to newly established “law and order.” He knows the outcome of any trial in these parts will end with the guilty party swinging from a rope, and he’s fine with that. Mostly.

There are complex shades to Hang ‘ Em High that mirror American society’s growing skepticism of government and justice, something rare in oaters of the past. Scandals and corruption had muddied the social waters, and evidence of that is on display in Cooper’s uneasiness with the supposedly dispassionate sentencing his employer doles out. And while he understands Rachel’s need to see her tormentors strung up, he also sees what that obsession has done to her. Up to that point, the strong belief in their own virtue showcased by Hollywood’s cowboys was in tune with the ideals of America itself, government included. In Hang ‘Em High, Cooper isn’t so sure about things anymore. 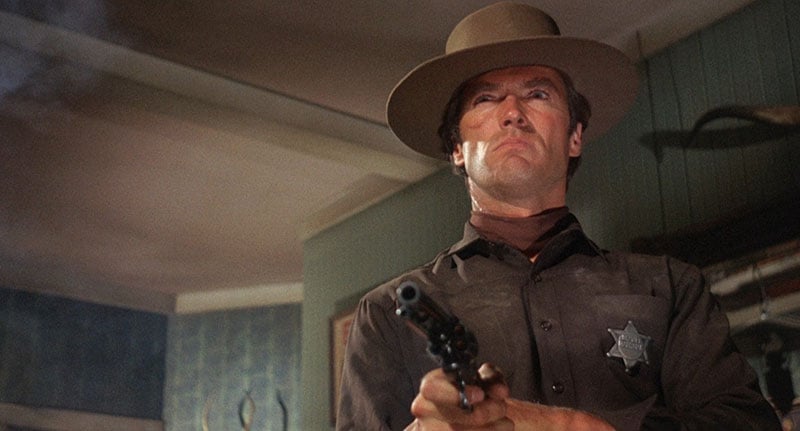 Nowhere is this more apparent than during the mass hanging scene, where two teenage brothers are set to die for associating themselves with one of Cooper’s lynchers (a weaselly Bruce Dern). Because of events that transpired on the trip back to town with the three outlaws, Cooper has mixed feelings about the boys being hanged. An argument with the judge ends in defeat, so instead of watching the public execution of these criminals — including one of those that wronged him — he decides to bang out his frustration with a prostitute. Satisfaction does not come easily to the internally conflicted.

By the end of Hang ‘Em High, the scales of justice may have been balanced, but does anyone feel good about it? Does anyone feel anything? Pessimism hangs over the film, blocking out former blue skies and casting a cloud that would eventually encompass the genre for years — one that it’s never truly recovered from. Nevertheless, the film still holds up well today, with a straightforward story told in complex ways, and visuals that while aren’t as bold as Leone’s, still stay away from the colorful vistas of John Ford. Its deserved success cemented Clint Eastwood as a major star.

By the time Kevin Costner directed 2003’s Open Range, the western was yesterday’s news. Sure, every now and then a new entry would peek out from behind the cultural obscurity the genre was relegated to and achieve popular status, such as Costner’s own Dances With Wolves (1990), Eastwood’s Unforgiven (1992), and George P. Cosmatos’ Tombstone (1993), but these were exceptions to the rule. The western was a relic of a bygone era, an out-of-touch curiosity for cinephiles to use as bragging rights among themselves. Perhaps America had seen enough of the dreariness of alcoholic-filled saloons, yellow teeth, and endless commentaries on the nature of violence and greed inherent in humankind. Perhaps America needed to know where moral lines were drawn again, even if the ideal didn’t reflect reality. Perhaps America needed something old-fashioned.

Costner gave audiences just that. A love letter to classic westerns, Open Range is shameless in its nostalgia for the way things used to be, when the difference between right and wrong was as plain as the meager speech uttered by simple men of honor. It’s western porn, really. Set against beautiful Montana prairies intersected by picturesque streams, the story finds a group of cattlemen led by Boss Spearman (Robert Duvall) and his right-hand man, Charley (Kevin Costner). Their quaint life involves steering their herd toward lush grazing, always telling the truth, playing cards, and imparting the wisdom of many years on the trail. Sure, Charley may have had a killer’s past, but he’s set himself right, and nothing will tempt him back; he’s a good guy for life now.

When this motley crew wanders into an area that an evil land baron named Baxter considers his turf, both their persons and freedoms come under attack. Baxter isn’t content on encouraging them to pass through, however — he also wants to send a message. He ends up killing one (two, if you count Tig the dog) and severely beating another; this is what happens to commoners who don’t obey his rules. In a way, payback is also at the heart of Open Range, but it’s of a more principled kind. Spearman and Charley don’t want any trouble, but they also don’t want to be subject to others’ control, and they’re certainly not afraid to stand up for their rights as human beings. They fight Baxter not just for their own personal reasons, but also because they despise tyranny and oppression. You can’t get more American than that.

Costner directs the first half of Open Range with a gentle hand that lets the audience breathe nature in, one glistening blade of grass at a time. There is optimism in every shot; the beauty found in this country outweighs the violence it sometimes plays host to. The same goes for the people sparsely populating it. The vast majority of characters are good people who wouldn’t think twice about helping their neighbor, save for the few bullies who might punish them for it — they just need some knights in rawhide armor to remind them of that. Later on, when an impressively chaotic gunfight ensues in the streets and alleys of a nearby town, goodwill overcomes; the world is right again. After decades of watching gravel-voiced gunhands weary from a harsh existence and moral compromise, this positive take was (and still is) refreshing. 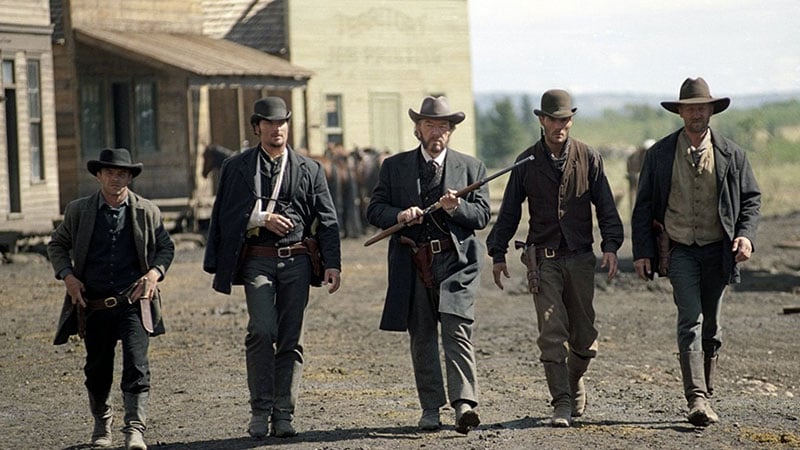 For the entirety of Open Range, the audience never doubts which side it’s on, nor why. Charley’s later confessions don’t make a dent in our support — we’ve already seen enough of his actions to know what kind of man he is — and Boss Spearman is nobility personified (his real name of Bluebonnet notwithstanding). The villains are cruel, corrupt, and cowardly until the very end. They may look strong, but their unscrupulousness makes them weak, while Spearman and Charley are shielded by pure integrity. It’s the type of mythic portrayal that John Ford surely would have approved of. This approach had become rare in westerns for far too long, and the warm feeling it produced served as a great reminder of the kind of storytelling the genre used to excel at.

Unabashedly romantic and endearing in its corniness, thrilling in its showdown conclusion, Open Range didn’t push the western forward but instead was content to merely look back and remember the good ol’ days.

Fifty years ago, Hang ‘Em High steered the American western away from its old-fashioned optimism; thirty-five years later, Kevin Costner’s Open Range briefly pointed it back. The cinematic landscape has changed greatly over that time, and though the wagon train is currently going in circles, the western can be proud of the territory it has covered. More recent entries like True Grit and Bone Tomahawk continue to show the wide variety of stories the genre is capable of telling, and maybe one day it will find new lands to explore. Until then, don’t miss out on these two classics.

‘What Keeps You Alive’ – A Stylish, Nerve-Racking LGBTQ Thriller

Spike Lee Goes Back to the Future in ‘BlacKkKlansman’