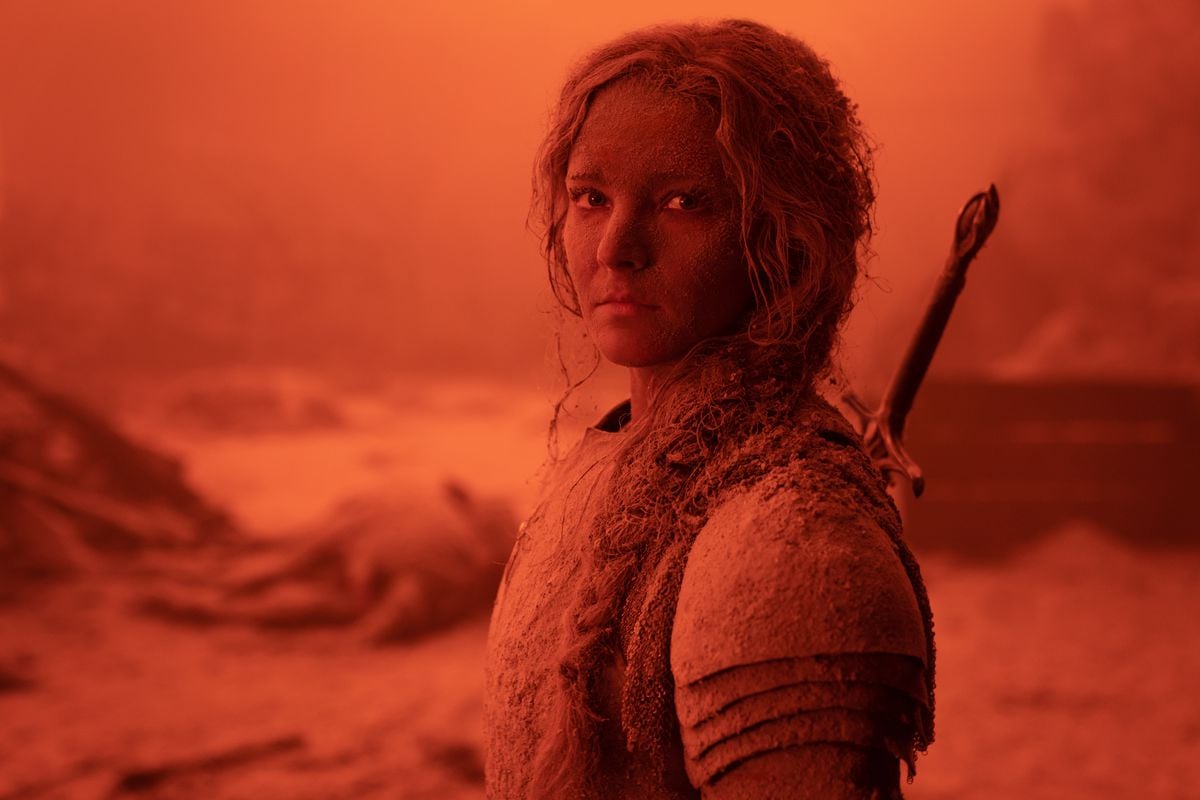 Smoke, flames, and ash masquerading as snowfall abound. Galadriel regains consciousness after being knocked out by the effects of the volcanic activity that overtook the Southlands at the conclusion of episode 6. This week’s chapter of The Lord of the Rings: The Rings of Power (ROP), titled “The Eye,” is an eye-opening experience for many of the protagonists. For one character, the nomenclature holds a bitterly ironic twist.

As viewers recall, ROP’s previous instalment roared with ferocity, exemplifying what the series can be when it gets down and dirty. Offering thrills and battle sequences galore, the showrunners and its director, Charlotte Brändström (who returns to direct once more), tapped into some of LOTR’s wonderful potential to be awe-inspiring. It can be argued that there were only two ways in which to follow up on the fireworks. Either deliver more of them, which would be quite the feat given that two full episodes remained, or deal with the aftermath whilst continuing the plot of the previously sidelined characters.

The filmmakers opt for the latter, which is a logical choice. Sustaining a full three hours of battle scenes (episodes 6 through 8) was always going to be a tall order. Furthermore, not knowing what is happening in the mines of Khazad-dûm or the Harfoots for so long would have left those groups dramatically short-changed. As such, director Brändström and writer Jason Cahill balance many spinning plates this time around in order to sustain the story’s momentum after the highs of episode 6. Do they succeed? Sort of.

“The Eye” is a strange beast. Not so much because odd things happen during its 70-minute runtime. More so because one gets the sense that it operates as its own middle chapter in a proverbial trilogy consisting of the final 3 episodes. An interlude during which the overarching plot of the Second Age is advanced with respect to how Durin and Elrond work in unison behind the Dwarf King’s back, as well as update viewers on the status of the Brandyfoots.

Regarding Durin and Elrond, their scenes are among the strongest in the entire series thus far. While they have not participated in any major action yet, their personal bond and how it is influenced by their duties towards their respective races is an interesting development. Prince Durin IV knows that the success of his dominion depends on taking care of his own, yet the friendship with the visiting Elf runs so deep that he is willing to risk that mission. Elrond, by contrast, is dependent on Durin’s assistance. Yes, said dependency derives from a need to avoid a dark fate that awaits his own race. By the same token, his admiration and appreciation of Durin are clearly felt. He isn’t tricking the Dwarf. He isn’t taking advantage of their friendship. They just happen to be extremely good mates with overlords that don’t especially care for the other side.

Over 7 hours into ROP, the one group whose story is the most difficult to pin is that of the Harfoots, most notably Nori and Poppy and their desire to help the Stranger. Not so long ago during these weekly reviews, it was argued that the series wasn’t as lively when the Harfoots were absent for an extended period. That was in many ways because the other plot threads dragged. The joie de vivre and relative innocence the Haroofts display made their scenes amusing. Coupled with the curious interactions with the Stranger, who is like a large baby learning as he goes, the time spent with them was charming.

With the other groups of Middle Earth seemingly engaged in events that will dramatically shape the Second Age, it’s unclear what is going on with the proto-Hobbits. At the risk of giving in to a lazy argument, one gets the impression that “stuff’s just happening.” The actors are not at fault. Markella Kavenagh and Megan Richards are excellent as Nori and Poppy. The showrunners and writers have some paying off to do though. Ideally next week, not next year.

While the fisticuffs are missed this time around, there are engaging moments. For most of the first season’s run, Galadriel’s journey was one of a steadfast, nay, obsessed warrior doing anything in her capacity to see a mission through. She hasn’t felt very much like the Galadriel of the books. That isn’t a bad thing, mind you. Moments when her rage surfaces exemplify how even someone as key to Middle Earth’s history as herself is fallible. By contrast, her wandering in the burnt woods accompanied by Theo, who also survived the volcanic explosion, leads to her providing words of wisdom to the youth. The latter’s bitterness at what befell his people is palpable, and it is Galadriel who offers calm and level-headedness. When faced with someone less experienced than her, the Elf sounds much like the wiser Galadriel fans know.

Not much has been written in this column about the special effects and aesthetic since the first couple of episodes when the budget unexpectedly impressed. Visually, “The Eye” is beautiful in its horror. Alex Disenhof serves as cinematographer on the show and pulls out all the stops to make the Southlands essentially look like hell on Middle-Earth. A suffocating orange hue impregnates the image where the battle in “Udun” took place. It feels as though the very air the characters breathe is fire. Charred corpses abound, damned peopled crawl to safety whilst lit, and smoke and ash hamper visibility. Not only are the visuals in “The Eye” extremely accomplished – rivalling the most inspiring moments of episodes 1, 2, and 6 – but ROP continues to demonstrate that it won’t shy away from showing uncomfortable truths about war.

Thematically the episode is rich, harping on the idea of guilt. One hopes to commit to acts that are just and right, but when things blow up one cannot help but carry the burden of shame. This thread is weaved through each group of characters in different ways, further emphasizing the emotional and psychological price the heroes pay

Despite its qualities, there is a discernable sense of biding time with this latest chapter. Such is the curse of most penultimate episodes. The meaty stuff must be reserved for the finale, resulting in the next-to-last portion feeling like an hors-d’oeuvre, an amuse-bouche. It’s fine, but ultimately a bit unsatisfying. Some plot developments, such as the Numenoreans deciding to retreat to their kingdom, leave one to wonder what their role in the season finale will be. And speaking of the finale…

The Lord of the Rings: The Rings of Power will return next week!

-Of all the directors who have helmed episodes so far, the highest marks go to Charlotte Brändström. She’s handled the most recent two, both of which featured different tones and paces. Plus, her episodes have looked the most handsome, at least up until now.

-Adar hardly features in “The Eye,” only appearing at the very end. One assumes his role in the eighth installment will make up for his absence this time.

-Odd, evil-looking Elves are back for a cameo, still on the prowl for the Stranger. Much like with Adar, presumably, the season finale will reveal what their importance is, and that of the Stranger himself.

-following the visual nod to the Ents in the series premiere, this time we get confirmation that the Harfoots, specifically the elder Sadoc. He knows of their existence. Hopefully, they’ll have a role to play at some point in the future.

-When the Dwarf King commands that the passage to the Milthril mine be closed off, he tosses a rejuvenated leaf into the opening. The tiny petal falls, down, down into the mine, into the darkness. Once on the ground, it suddenly burns. A creature hibernating nearby produced the blaze. Disturbed, the Balrog awakens!

-“The Eye” concludes on a Tolkien geek note that fans will probably appreciate, albeit one that was easily guessed from last week’s clues. As the Orcs get to know their fiery home, Adar informs them that the region known as the “Southlands” is dead. On-screen, as the frame tilts upwards to reveal the charred landscape and an active volcano in the distance, “Southlands” is replaced with…”Mordor.”

Why you should be watching Ramy