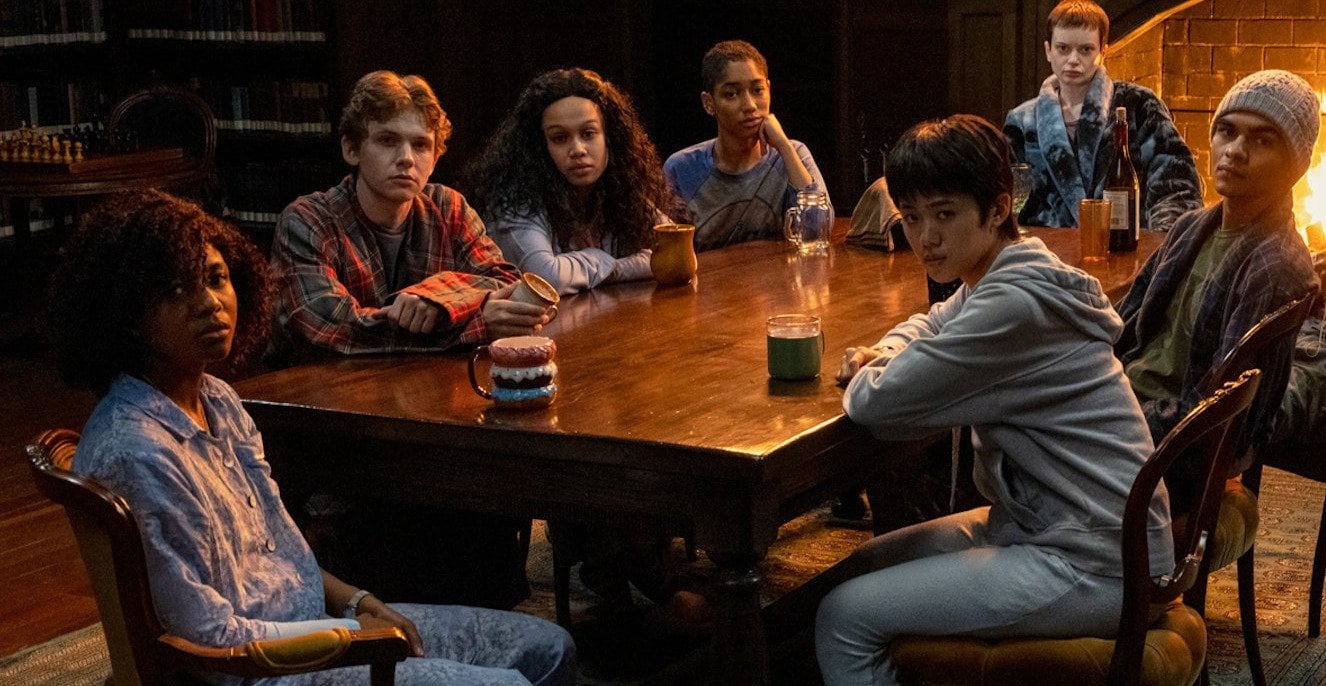 Whether we want to admit it or not, we expect the same from life as we do from storytelling. Moments of profundity, love, discovery, wonder… and of course, closure. Maybe not the kind of closure that makes us comfortable, but deep down, I think what we all hope for is that the end of consciousness – at least as we know it – is that is comes with a kind of peace. Seeking out that peace, in life and in narrative, can lead to so many different places; some exciting, some boring, and some underwhelming, but all of them worth experiencing.

The Midnight Club, Mike Flanagan’s fourth Netflix adventure (co-adapting Christopher Pike’s novel with Leah Fong), is ten hours of television earnestly trying to capture those tenants of existence, told through the tale of eight terminally ill teens staying at a home full of mysteries, memories, and things going bump in the night. Moreso than his previous offerings, The Midnight Club is an inherently difficult watch; though it eases viewers into the experience via a catchy 90’s soundtrack and a very familiar, intentional opening hour, The Midnight Club is slower and even more subtly contemplative in its reflections on life, which will probably turn off some fans of The Haunting of Hill House and Midnight Mass.

(Oh yeah, and it is more a young adult drama than its predecessors, which is really going to fuck with the minds of some fellow TV critics, methinks).

But as the ten episodes begin to take hold, anchored by the nightly gatherings of the titular club and the ever-familiar set of jump scares and creepy vibes, The Midnight Club slowly transforms into something more exciting – a more effective, memorable version of The Haunting of Bly Manor (to be a bit reductive). An even more apt description of sorts would be calling this Flanagan’s version of Tales From the Loop; through an overarching narrative with the familiar elements we expect (spooky shit happening at an evocative location), The Midnight Club looks inward, at the stories we tell and why we tell them, both to others and to ourselves.

Perhaps the most important facet of Flanagan’s storytelling in The Midnight Club is how it approaches resolution through the mechanics of its stories-within-a-story feature. At each meeting, a member of the titular club – eight dying teenagers, introduced through the lens of our quasi-protagonist Ilonka – tells a “ghost”, a story they’ve made up, thin analogies of their brief life experience filtered through the pop culture they know and love. These stories they tell, which range from traditional horror, to detective noir, to 1980’s era science fiction, present themselves as simplistic homages; but despite their predictability (all of them mini-adaptations of other Christopher Pike books, by the way), how Flanagan utilizes them as devices to explore character and emotion, brings a depth of storytelling to its story of sad teens and religious pondering (and maybe some cult-adjacent stuff… maybe). It makes for a powerful, connective experience about love, pain, and the freedom of imagination, a rumination on the certainty of change, and the chaos of trying to connect with others (maybe even sometimes from the ‘other’ side, whatever that may be).

I think it would be easy to dismiss The Midnight Club as distracted or underwhelming; its dramatic swings are much shorter and pointed than in previous Flanagan series. Even the various mini-film homages can feel a bit dry at times; then again, as stories designed to be conceived and told by teenagers all destined to drop dead in the very near future, the simplicity of narrative and stark emotional choices begin to give shape to something different. Flanagan is reflecting on the nature of telling stories, in the art of creation and how personal it is – even if we’re adapting The Terminator, for example, the decisions we make offer so much rich material in helping understand each other as human beings. Even when we’re gone; once we depart the earth, we are entirely defined by fading in the memories of others.

It’s the one thing in our life that is certain, and the one thing we can never quantify or comprehend. So how do we reconcile it? The Midnight Club is obsessed with exploring that question, continuing the theological curiosities explicit in so much of Flanagan’s work (and historically, so much of the horror genre). And it quietly makes for some of the most frightening material he’s made to date, and possibly his most challenging to watch: this is the nature of trying to interpret the impossible, and grasp at enlightenment against the fading of the light – hardly a concise, comfortable realm for a limited television series to try and exist.

It is, in differing strokes, both incredibly ambitious and extremely safe; but through the underlying warmth and curiosity it has for both its character and subject, The Midnight Club delivers a thoughtful, emotional story about the most difficult moments of self-definition in life, and how we try to find clarity in them. Never absorbed by its tragedies, but always driven by fear of the unknown, The Midnight Club is a remarkable balancing act of tone and form, that is only occasionally frustrating in its willingness to move too quickly through a scene, or linger on its more traditional genre trappings too often, like the audience’s safety net.

As is often the case with Flanagan’s shows, of course, there are characters I wish we’d spend more time with; the perpetually lying Cheri, and Heather Langenkamp’s Dr. Stanton, an understated performance that stands out against a group of younger performers, whose delivery can be admittedly mixed at times (a few Flanagan regulars make cameo appearances, including a few so good I’ve been sworn not to spoil them). But there’s something naturalistic to it, the slight variances in emotions and performative quality; after all, teenagers are stuck in between the identities formed unconsciously, and the one consciously forming as an adult – and that transition is not an easy one to make, especially if you’re also transitioning into a phase of life decades before they should have to.

Like people, stories are sound and light, combinations of elements and ideas that crystallize for brief whispers in time. We can guess at their conception, but we can never understand their end – some stories last for a generation, some legends perpetuate throughout human history for thousands of years (and some streaming series are erased from existence to be forgotten forever, but we’ll talk about HBO Max another day). But in the playground of stories, we can understand a little bit more of who we were, what we believe, and what we want; and given we can’t get any of the other answers we want about life, but we can certainly make do and find clarity… and The Midnight Club shows how we do it, how we build community even as we face the end: by leaning on the conventions and shared moments of experience that build connection, empathy, and love.

Have I fallen off the rails talking about a streaming series that most people will forget in a period of weeks? Well, it all depends on what you bring to The Midnight Club: like its characters time in Brightcliffe, your experience will be defined by your willingness to embrace, or reject, tradition (sometimes in the same breath). At times indulgent, dissatisfying, and meandering (sometimes in the same breath), The Midnight Club is a fascinating series, full of heart and curiosity for humanity, in a way that’s not quite as resonant as Midnight Mass, but stands to reason why we should continue to be excited for Mike Flanagan’s Netflix projects (The Fall of the House of Usher, featuring the more traditional Flanagan cast, is currently in production). Poetic, cheesy, resonant, resistant… The Midnight Club isn’t for everyone – but for those willing to take the leap, may just find a reflective series, the great, imperfect kind that make you reach out for the ones you love, and appreciate the next sunset you see just a little bit more.

The Twisted Targaryen Family Tree on House of the Dragon