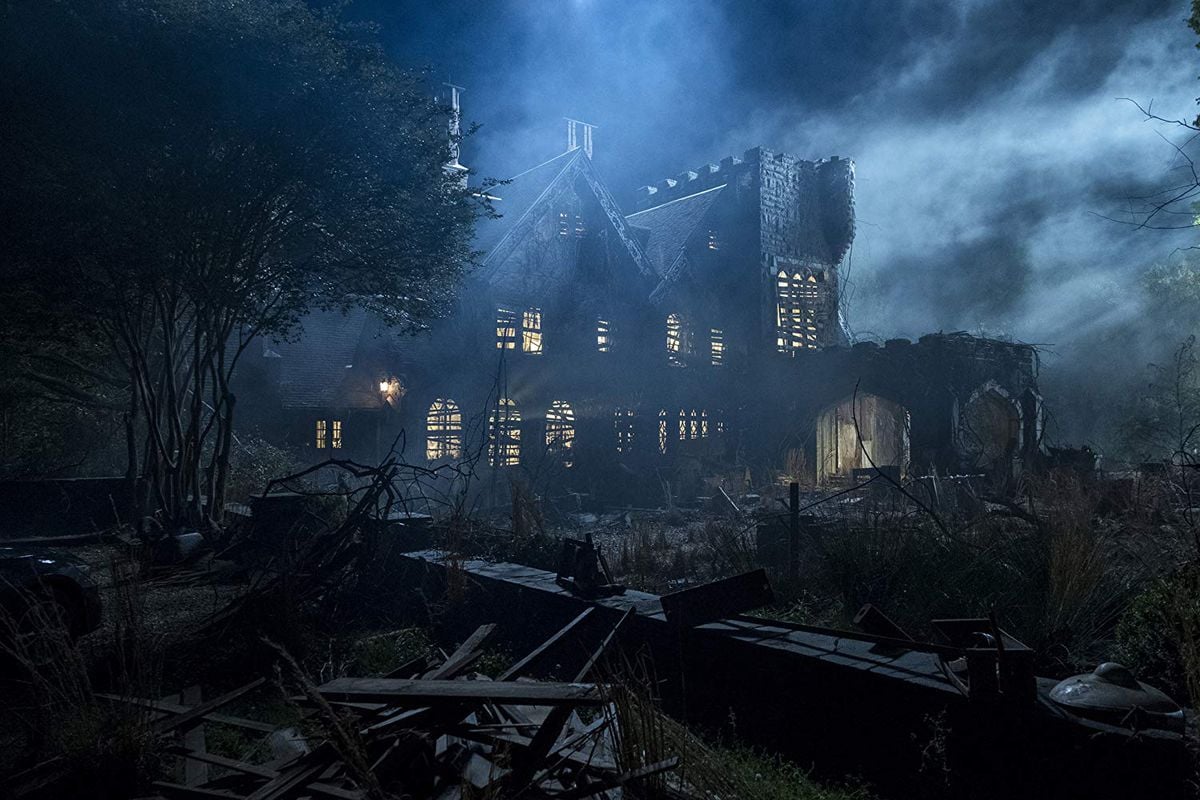 The Haunting Of Hill House Review

Horror is one of the most exciting and versatile film genres around, as the terrors haunting its protagonists may not just be simple manifestations of evil, but a metaphor for the protagonist’s own mental fears and preoccupations. Thus, Drag Me To Hell is not only a great visual experience, but also a great metaphor for anorexia, while The Babadook is not only a highly creepy creature-feature, but also a metaphor for grief, and Rosemary’s Baby is not only about a scary baby, but also the natural fear of becoming a mother. When viewed in this sense, horror is the most cathartic genre there is, as it makes one’s issues literal, forcing us to confront (and hopefully purge us from) our worst fears.

Horror has reached a peak in recent years, as these submerged, important themes have come to the foreground. Get Out, for example, took what is often subtext — racial fear of the other — and flipped it on its head, making it the main theme of the movie to deliriously well-made effect. Hereditary then took the subtext of inherited trauma and mental illness, made it explicit, and was at times more a serious adult drama than a conventional horror. This isn’t to say that horror hasn’t always been a smart and subversive genre; only in recent years has the subtext become the text. Call it “elevated horror” if you want; I call it a fascinating and deeply exciting improvement.

Nevertheless, this idea of rigorous, theme-heavy horror continues with Mike Flanagan’s TV adaptation of Shirley Jackson’s The Haunting of Hill House. Mental health, so often the subtext of a horror series, is foregrounded here so that each character’s buried fears are far more important than the stories of the ghosts haunting them. Instead of those ghosts being a personification of the occupants’ issues, their internal problems themselves are the issues, which then haunts them in the form of ghosts. At times a deeply sad and moving exploration of trying to move on from the trauma of the past, The Haunting of Hill House is a major step up in complexity and depth for director Mike Flanagan, who directs every episode. It’s also a great demonstration of what television can do for horror in terms of providing weightiness that film, tied to a three-to-five-act structure, simply doesn’t have the time to explore. Although far from perfect,The Haunting of Hill House is easily one of the most interesting and ambitious TV series released this year. 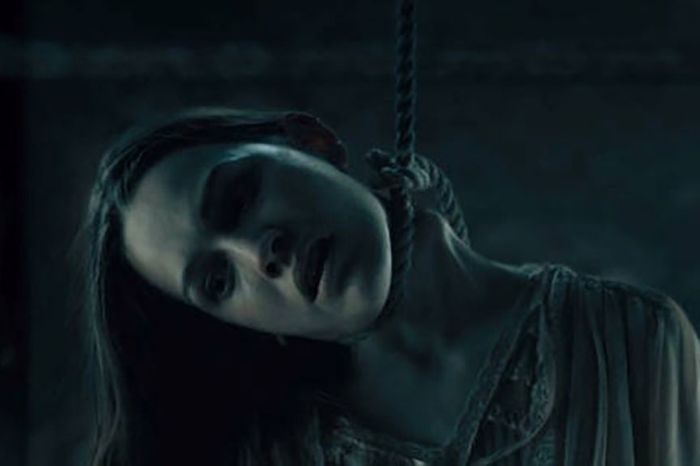 The Haunting of Hill House takes a two-pronged approach, simultaneously telling the story of the Crain family moving into a large mansion house in 1992, and that same family nearly a quarter of a century later dealing with the horrors of the past. Our narrator is Steven Crain (played as an adult by Michiel Huisman and as a child by Paxton Singleton), a novelist who has turned the spooky happenings of the Hill House Hauntings — once a national tabloid scandal — into fodder for his writing career. This decision has split the rest of the family, including embalmer and mortuary owner Shirley (adult: Elizabeth Reaser, child: Lulu Wilson), child psychologist and amateur psychic Theo (adult: Kate Siegel, child: Mckenna Grace), heroin addict Luke (adult: Oliver Jackson Cohen, child: Julian Hillard) and his twin, Nell (adult: Victoria Pedretti, child: Violet McGraw).

None of them have emotionally moved on from the time spent in the house with their parents, architects Olivia (Carla Gugino) and Hugh (Timothy Hutton). They only planned to be in the house a short while, to spruce it up and then sell it for a massive price, but this house is no ordinary house, and soon the children start seeing all manner of ghosts, leading to the fateful night — hinted in the very first episode — that their mother kills herself.

After a scene-setting opening where Steven is the main hero, episodes 2-5 focus almost exclusively on each child, using moments from the past to try and understand who they became in the present. For the most part, this is excellently done; Hill House paints a panoramic canvas of people undone by grief, trying to move on despite the horrors of the past. Of course, there are many creepy ghouls (often hiding in the edges of the frame — I’d recommend getting a projector to truly enjoy the scope of this show), but it’s really just a great demonstration of how to connect past and present events to get the whole idea of a character not only haunted by literal ghosts, but also grappling with the ghosts of the past. 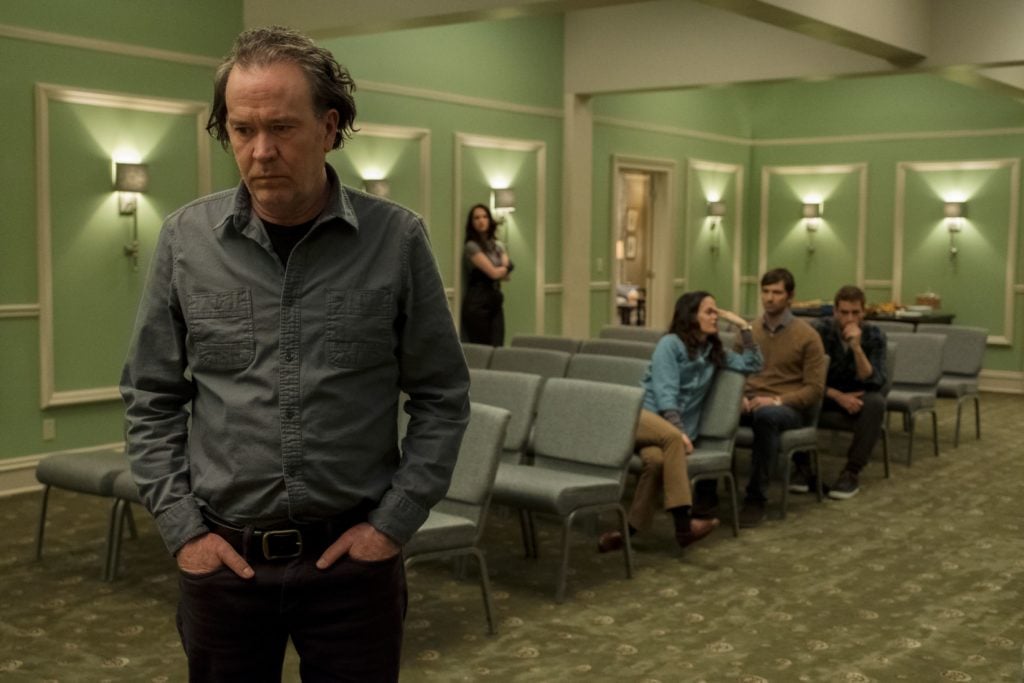 To stress this link between past and present, countless match cuts are used, whether it’s someone opening a door in the past and closing it in the present, or a ghost talking to someone in the past who turns to meet a friendly face in the present day. As well as giving the series a slightly addictive quality (often these moments occur right as we are about to discover something terrible), they work well in representing how past events can often sneak back up on us when we least expect. It’s not quite as accomplished as the sleek, intuitive editing of Sharp Objects, however, and after a few episodes it becomes rather grating and something of a narrative crutch.

A more effective representation may be the use of tracking shots in episode six, in which the patriarch literally walks between the present and the past. This works better because it comes as a little bit of a surprise, and it’s also a better cinematic representation of how to flatten the distance between past trauma and the present. This is the episode that everyone has been talking about, and with good reason. Linking the story of two different nights with epic tracking shots, one can sense the massive technical accomplishment that goes into each pan and swivel. Its only a shame that the acting quality isn’t quite on the same level of the camerawork. 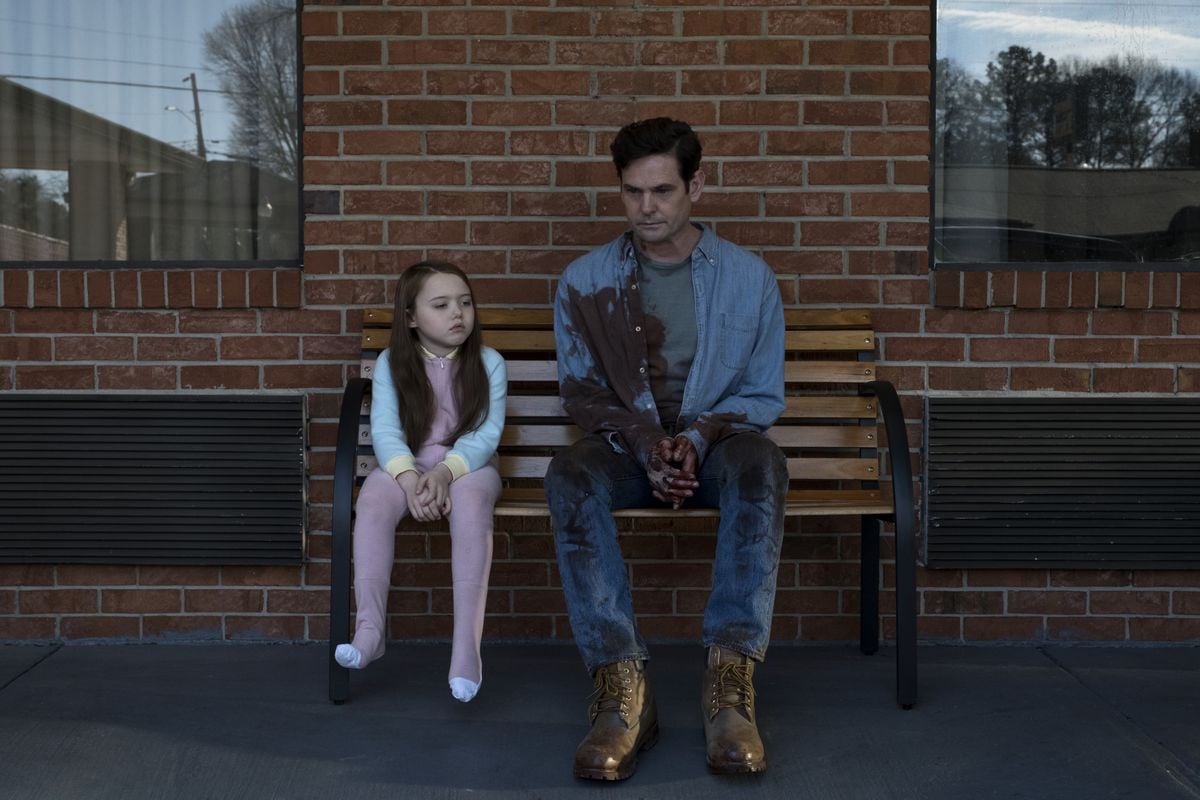 It’s not unfair to say that the quality varies massively, often between two actors in the same scene. This is weighty stuff, and cannot just be phoned in by pulling terrified faces. There is a strange blend of horror and cable TV actors here, with even some genuine Academy Award winners (see: Timothy Hutton). These flaws are massively apparent in the play-like episode six, with a powerful Elizabeth Reaser performance going up against the overacting of Michiel Huisman and the confusion of Anthony Ruivivar (playing Shirley’s husband), who sometimes walks in and out of the frame as if he is a ghost himself. Naturally, Lulu Wilson is the best of the child actors, providing Shirley a clear-line towards her adult self, while Julian Hilliard as child Luke seems to have no real connection towards adult Luke at all.

Still, there is a real sense that everyone is trying their best to make this a capital I-important TV show; the hamminess involved in some of the acting comes a lot from actors really swinging for the fences, often dealing with dialogue that feels like it was written on a deadline. The effort is commendable, and so is the sentiment; this is not just a creep-fest — it’s a show that feels like it matters. Some bad acting isn’t always that important.

Still, in its final episode, The Haunting of Hill House overplays its hand, aiming for saccharine proselytizing instead of trying to resolve the issues within the narrative itself. Despite having taken us so far on this dark and emotionally resonant journey, it seems that Flanagan wants to subvert the genre once more. It’s a noble idea that love can save us from trauma, and was interestingly explored through the different character’s relationships (in a nice touch, adult Theo is a lesbian, and it’s treated matter-of-factly), but this message is a bit shoehorned in at the end through voiceover instead of simply being allowed to speak through the story itself.

Additionally, this adherence to following individual characters’ journeys and issues episode by episode was a smart one in the beginning, but Flanagan tries it again in miniature form in the finale, stalling nearly all of the narrative momentum built up in the previous episodes to add yet more character explanation and depth. The standard Netflix bloat creeps in. Having done such a great job of showing the power of horror on TV, Hill House then undoes it by then making the show too long and digressive by the end.

All things considered, however, The Haunting of Hill House is well worth a watch — not only for its impressive technical chops and the depth of its screenplay, but for its massive heart. It might be messy, but this is horror at its most psychologically rigorous, fascinating, and sentimental. It shows that we all live with the ghosts of the past, but we are not bound nor defined by them. If Netflix ever does get around to choose-your-own-adventure stories, then horror, with its natural built-in cathartic nature, might be the best place to start.