Bodyguard starts with an electrifying piece of bone-shredding tension, with our hero David Budd (Richard Madden) casually sitting on a train to London with his kids when he notices something supposedly incredibly dodgy: a Muslim man spending an inordinately long time in the toilet. A war-veteran-turned-cop, Budd quickly takes charge of the situation, getting swift confirmation that a terrorist attack is imminent. But the man walks out and there’s no bomb on him; Budd is confused. Everything is frantic (including the editing, camerawork, and the pulsating score) as he goes back to the toilet to check if the bomb has been dumped. It turns out the one with a suicide vest…is a woman!

This is just one of many gender-reversals that occurs in Bodyguard, a conspiracy-tale that weaves together grizzled ex-vets, Tory party schemers, and organised crime leaders to paint a sensationalised picture of the state of terror in Modern Britain. While admittedly a highly entertaining romp that blends action and sex in a way rarely seen on primetime British television, the show ends up reinforcing the status quo to a potentially damaging degree.

It makes sense that the story starts on a train, as British transit is cursed by the most annoying announcement of them all: “If you see something suspicious please tell a member of staff or alert the National Transport Police. See it. Say it. Sorted.” As well as being a syntactic nightmare, this keeps everyone on edge, and it also gives every ‘concerned’ citizen the right to call the police on every woman in a hijab or brown man with a beard they see. It’s obvious that David Budd is on high alert; the city is almost always in a state of high tension. Still, this gender reversal is a neat way of telling us not to judge people by stereotypes…until the show ultimately tells us that we should’ve judged by stereotypes in the first place. Sorted.

When David Budd’s heroics on the train are quickly noticed — especially the comforting ways he had with potential suicide bomber Nadia (Anjli Mohindra) — he is assigned to guard none other than the home secretary herself. She’s played commandingly by Keeley Hawes, who often dismisses Budd’s recommendations and ends up doing things herself. But once rogue elements in society start taking designs on her life, it is up to Budd to step up and do the right thing. Meanwhile, a personal connection is fostered between the two, leading to some steamy bedroom scenes.

The reason everyone got excited about Bodyguard is that it takes the same premise of The Bodyguard (1992) — a man tasked with guarding an important woman but ends up sleeping with her — and applies it to the stiff world of British politics. This gives Bodyguard a feminist appeal: a woman is in charge of a man eternally deferent to her. Yet on the other side of the coin, it’s also based on old-school notions of chivalry — men are there to save women once the guns start going off. This fascinating gender power dynamic is never smoothly resolved, especially once the two of them start shagging.

But there’s more to the show’s gender bending than mere sexual fantasy. Nearly the whole of Bodyguard is a woman’s world. David Budd works for the validation of women; whether it’s the home secretary, his estranged wife, his superiors at work, or fellow cops, he wants to please them. Yet, he barely understands what they want, making him a particularly vulnerable man, easy to manipulate. Here, the gender stereotypes are flipped — men are subordinate to and let down by women — but crucially, these women (with one massive capital-R reservation I’ll get to later) are seen as existing as real people. It’s normal. This makes Bodyguard feel fresh, new, and with the modern times. 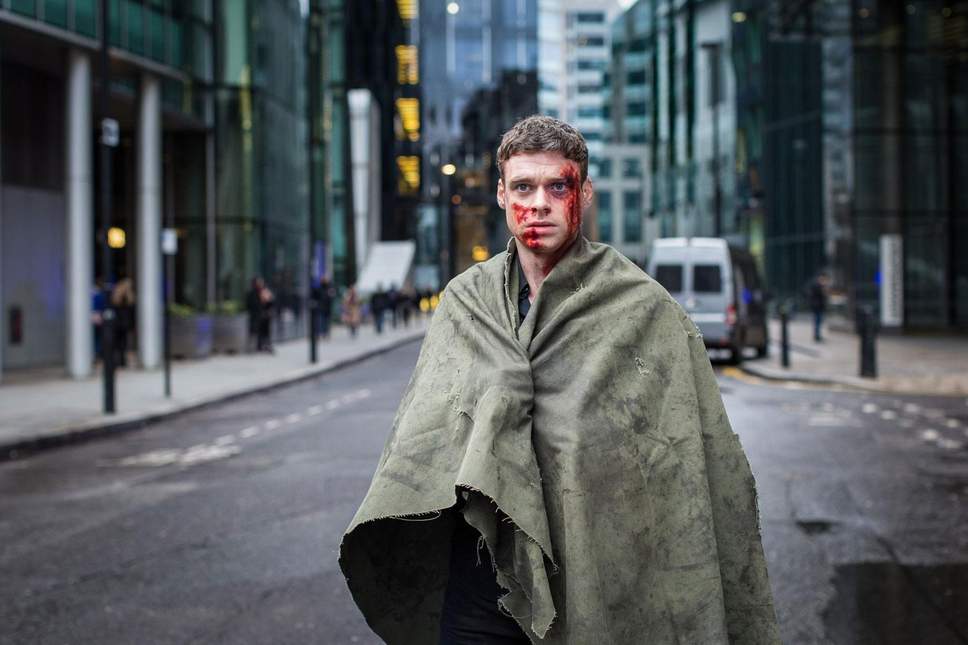 A sudden twist halfway through the show changes the emphasis towards an overarching conspiracy, which implicates every corridor of power within the British state. John Le Carré-like in its reach, the plot is bolstered by some of the tensest action scenes the Beeb has produced in years, including a blistering finale that feels like it could go off (literally) at any time. Madden does a really good job here, balancing the pain of living with PTSD with trying to live up to traditional expectations of masculinity. With a little tweaking, Bodyguard could’ve been an all-time great.

However, for all this technical worth and acting ability, the show’s ultimate failure comes in its final, Scooby-Do-like face-off reveal, which relies on a stereotype of Muslim women — probably the most oppressed segment of society in British society — so painful in its negativity that it could have real-world implications. While it’s not unfair to depict certain Muslims as terrorists given that Islamic terror is a real threat to British safety, there are much, much better ways to go about it than this, especially as the show tries to frame it as a big feminist reveal. This is the kind of television that makes headlines for its absurdity and technical proficiency, then generates think-pieces due to its insensitivity — a well-oiled machine with eye-grabbing tension but eye-rolling implications. While I could forgive the thousands of inaccuracies regarding police work (it’s TV after all), a better use of imagination has to be employed with regards to the experiences of Muslim characters.

Bodyguard comes hot off the heels of the strange, deeply feminist Killing Eve (which although a far better exploration of feminine power, succumbed to the same dodgy Russian stereotypes currently plaguing the British consciousness) and the powerful web of misery, police-procedural Collateral (which featured Carey Mulligan’s best ever performance but was undone by its own speechifying). Nonetheless, the new quality of spy/police content from the BBC that actually means something, takes risks, and has an edge instead of simply going through the motions, is a welcome development for home-grown British television. But can the ambition be matched by racial smarts, or do all spy/police shows have to lean into obvious stereotypes in order to work? Part of the charm of Bodyguard is how it seems so close to the subversive edge, before coming crashing down in a heap of Islamophobic nonsense. Anyway, lets hope The Little Drummer Girl, which debuted last Sunday, can do better.

“No Good Deed” Is Daredevil’s Hour of Reckoning