After Fisk’s explosive release from prison, all the cats are out of all of the bags in “No Good Deed”, a Daredevil episode with an impressive agenda. From the reveal of Dex’s emotional “support”, to Foggy’s disappointment with his new fancy lawyer lifestyle, “No Good Deed” is a series of introspective moments of judgments for new and old characters alike. That cohesion gives what could very easily feel like a very perfunctory hour (especially for characters like Matt and Ray) much-needed propulsion, a story of Daredevil‘s players pushing themselves to internal breaking points.

“No Good Deed” is a series of introspective moments of judgments, for new and old characters alike.

Set in the aftermath of the Albanian attack on Fisk’s transport, “No Good Deed” primarily focuses on Matt’s poorly thought-out assault on Fisk’s FBI-owned penthouse (which so happens to be in a hotel indirectly owned by Fisk, a nice little detail Karen uncovers), complete with laughably overwrought mirages of Fisk teasing Matt for his failed attempts to defeat Fisk. As Matt sneaks up through the many floors of the hotel, the part of himself that is Daredevil teases him, dressed up in Fisk’s white suit, bombastically chiding him for failing to kill Fisk the first time around, which allowed his reign of violence, intimidation, and prosperity to continue behind bars. 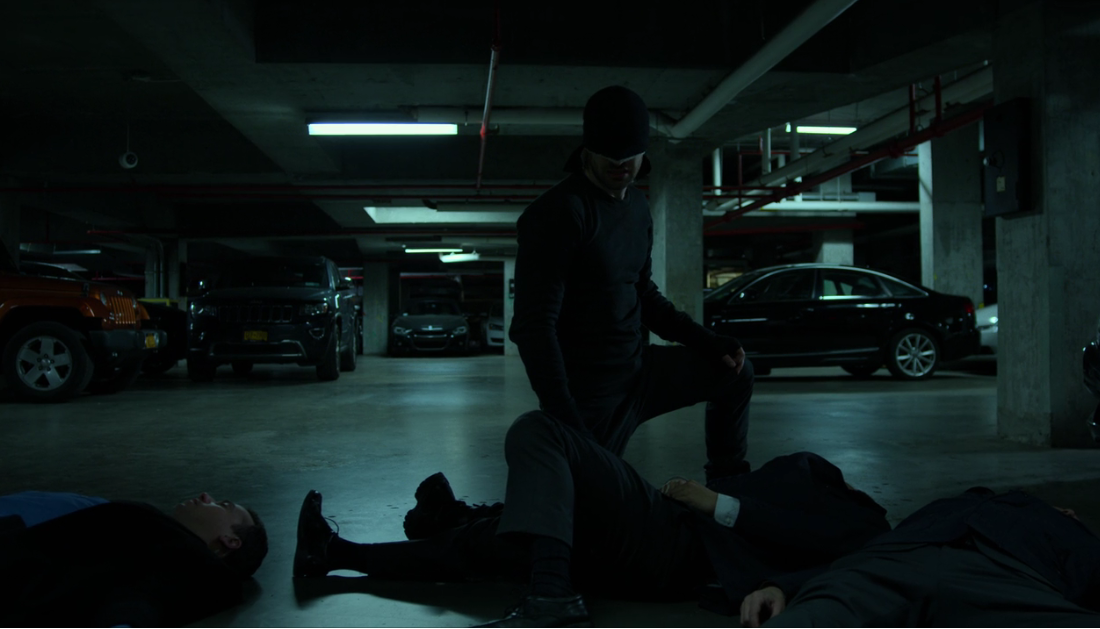 On the one hand, you can’t blame Matt for not focusing on Fisk for a while: with fifteen thousand fucking ninjas running around New York, cutting off the remaining limbs of Fisk’s empire was never a priority, allowing the man to rise to power once again as he cut a deal with the FBI, all with the clear intent of manipulating the federal government Whitey Bulger style, to further enrich himself while exploiting the protection of federal agents. But Matt’s inability to fully commit to the devil inside was something we saw in season two of Daredevil, and in The Defenders: ultimately, Matt’s commitment to his Catholic morality defined him, whether it was with Elektra, The Hand, Frank Castle – or even Foggy & Nelson, Attorneys at Law.

Matt has always wanted one foot in both worlds: that compromise is rampant across the world, infecting even the supposed staunch, unyielding power of the law. The existential dilemma Matt faces in “No Good Deed”, catalyzed by the news of Fisk breathing the air of a free man once again, is a powerful launching pad for the season to follow; abandoned by his god, Matt sees no path to redemption but through the darkness, an ideology wonderfully represented in his costuming: the black covering Matt’s eyes features only a small ring of white at the bottom, the last bit of humanity being consumed by the devil within, clawing for power. 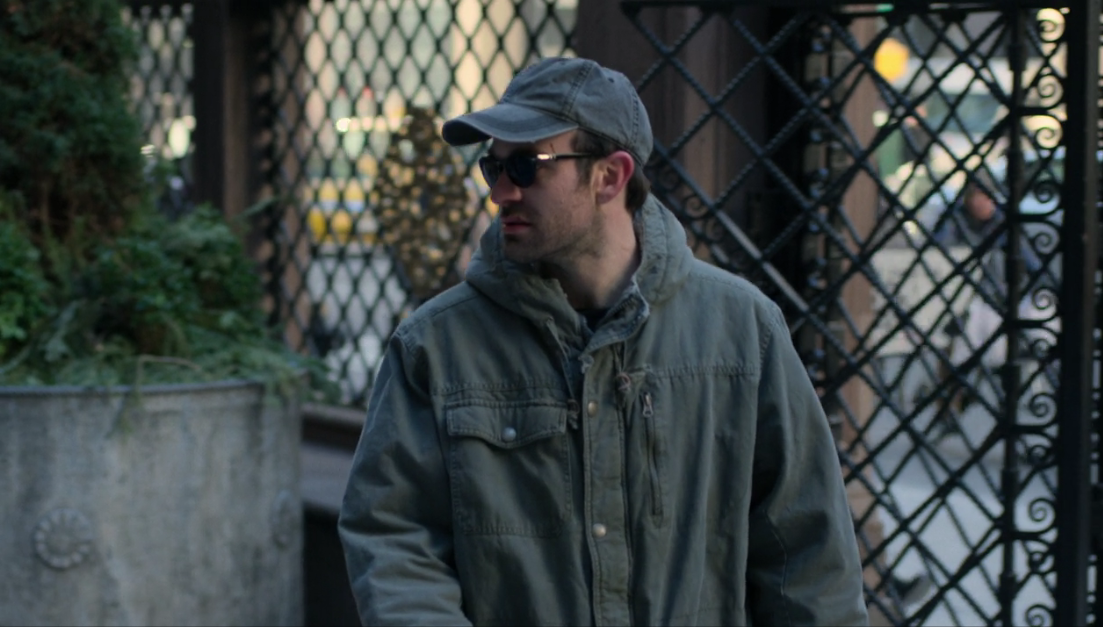 Charlie Cox’s performance as Matt is really the anchor of this episode, led by the scene of Matt making his way through the lobby of the hotel. With Matt posing as a man who can see, “No Good Deed” places the central theme of the episode in his hands, and lets him run free with it. As Matt tries to pretend to be someone with normal vision, Cox embodies the anxiety that comes from a deeper betrayal of identity: the one each character of Daredevil faces in this hour, perhaps the darkest interpretation of The Emperor’s New Clothes we’ve seen in modern media.

Foggy’s story neatly folds itself into these ideas, as well, as New York’s hottest young lawyer realizes his new position in the world, doesn’t exactly change his inability to fix the world around him. He tries to convince district attorney Blake Tower to let him push to get Fisk back in prison, only to be politically stonewalled due to his request coming during election season. Fisk’s ability to put other criminals behind bars is so valuable to the city, they’re willing to take the deaths of five agents with a Coke and a smile: this is a hard enough thing for Ray Nadeem to square away, forget the single most righteous, good-hearted character on the show.

Like Matt, Foggy has to deal with the limits of his own power; the difference between the two neatly drawn by their choice of profession. What makes the scene between the two at the end of the episode so powerful is just how stark the differences between the two have become; Foggy’s fancy clothes and warm reception of seeing Matt alive is nothing like the dour overcoat and isolation tactics Matt employs on his best friend.  Foggy may be in shock to see Matt alive, but the difference in their reactions is much deeper, and more thematically palpable than that: Matt is ready to fucking commit to taking down Fisk, and Foggy’s not really committed to much of anything in his life. 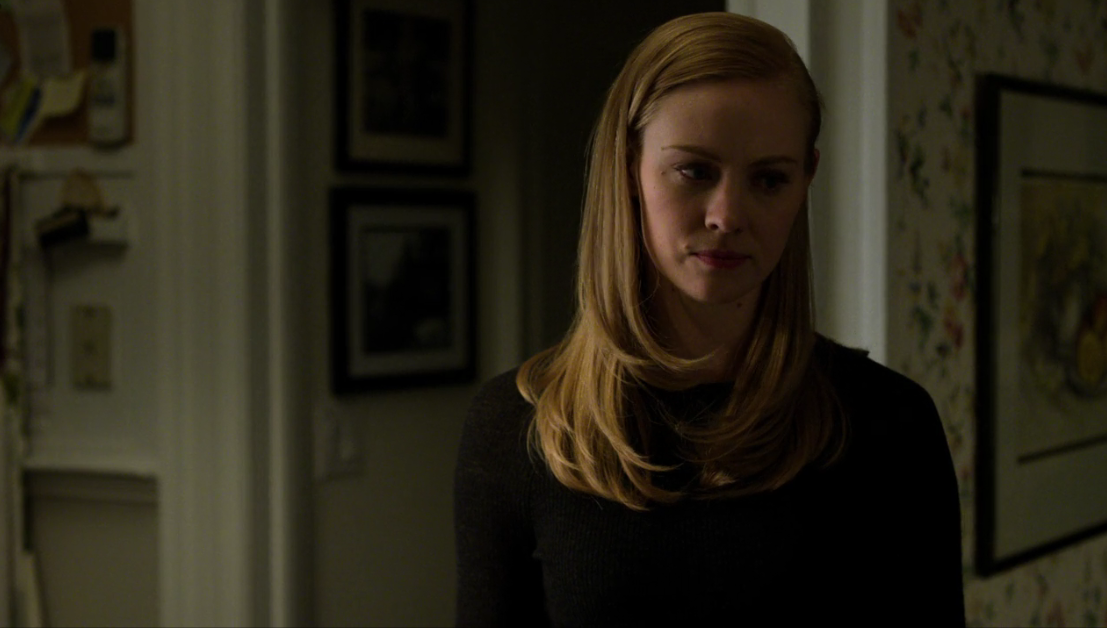 Though Matt’s willing to sacrifice his friendships, and most likely his life, to take down Fisk, we don’t see Foggy – or Karen, wasting away in the most boring, if inherently necessary subplot of the episode – giving up on their humanity to take down the monsters of their world. Matt’s insane plan to make everyone forget about him is the antithesis of what makes Daredevil’s mission so powerful: even the most righteous vigilante needs support. At the heart of this episode is the idea that the ones we love are ultimately the ones to define us: whether we fail or not is defined on their terms.

Be it a god one worships, an editor one reveres, or a best friend lost in the darkness, salvation is never defined on our terms: it’s why Matt loses the argument to Fisk/Daredevil as he walks through the hotel, and why he thinks that people can’t fundamentally change who we are. The devil’s greatest trick is convincing the world he doesn’t exist, and the one inside Matt is no exception – because of that voice, that relentless hunger to get vengeance for those he couldn’t save, Matt convinces himself that neither suicide or embracing humanity is going to save himself – he may be right, but without love, there is no faith, and there can be no redemption: until he realizes that, Matt will never be able to reconcile with himself, no matter how many crime bosses he personally kills.

Unfortunately, Karen’s always-annoying journalism subplot chugs along in the background, giving Karen laughably little to do as her editor admonishes her for chasing a great story, pulls her by line, and also tries to set her up with his son, a borderline pathetic excuse for a plot device that sticks out like a sore thumb in the world of sharply defined secondary characters. Mitchell’s presence in early seasons gave Daredevil a fun, grizzled side presence to deliver monologues filling in the background plots – but this season, his character just feels like an impediment to making Karen interesting (for once). Why does he need to be so goddamn protective, continuously beating the audience over the head with the same tired, “I need to protect you” logic, just to give an excuse to keep Karen from crossing paths with Matt? What was once a pleasant side character has turned into a narrative crutch for a character sorely lacking in interesting material, once again relegating Karen to the most frustrating of roles, filling in the background details for the bigger, more male characters of the world.

Karen’s disappointing blind date and subsequent investigation aside, most of “No Good Deed” harkens back to Daredevil‘s earlier, slower and moodier days, a sentiment I find myself repeating in these early reviews – but it’s so goddamn exciting to see Daredevil get back to the overwrought theological bloodbath it once was, when the devil of Hell’s Kitchen didn’t have a costume, an assassin girlfriend, or a bunch of near-immortal crime lords chasing him at every turn. The slower pace allows Daredevil to really hone in on what makes it great: and while it’s certainly not a pace I would expect (or hope) the show to maintain for the entire season, the meticulous nature of its craft in these early hours are intriguing, more than enough to counteract the few flawed moments (Dex is a creepy stalker? Whyyyyyy) and disappointing developments that bubble to the surface during “No Good Deed”.

-Woe is thee, Foggy Nelson. Is anyone else getting slightly tired by this early storyline? It does feel like his meeting with Matt is giving him some purpose, however, so fingers crossed this trend doesn’t continue.

-Just want to reiterate that Karen’s editor sucks all the air out of Karen’s plot in this episode. What a disappointment.

-To add insult to injury, Matt steals Foggy’s wallet after severing his friendship with him. C’mon man.

-Vanessa is outside Barcelona, which means she’s gotta be making an appearance soon, after being mentioned maybe twice in the entire second season of Daredevil. Welcome back!

-Fake Fisk trying to blame Matt for Stick’s death is lame. Blaming Matt for anything that happened during The Defenders is lame.