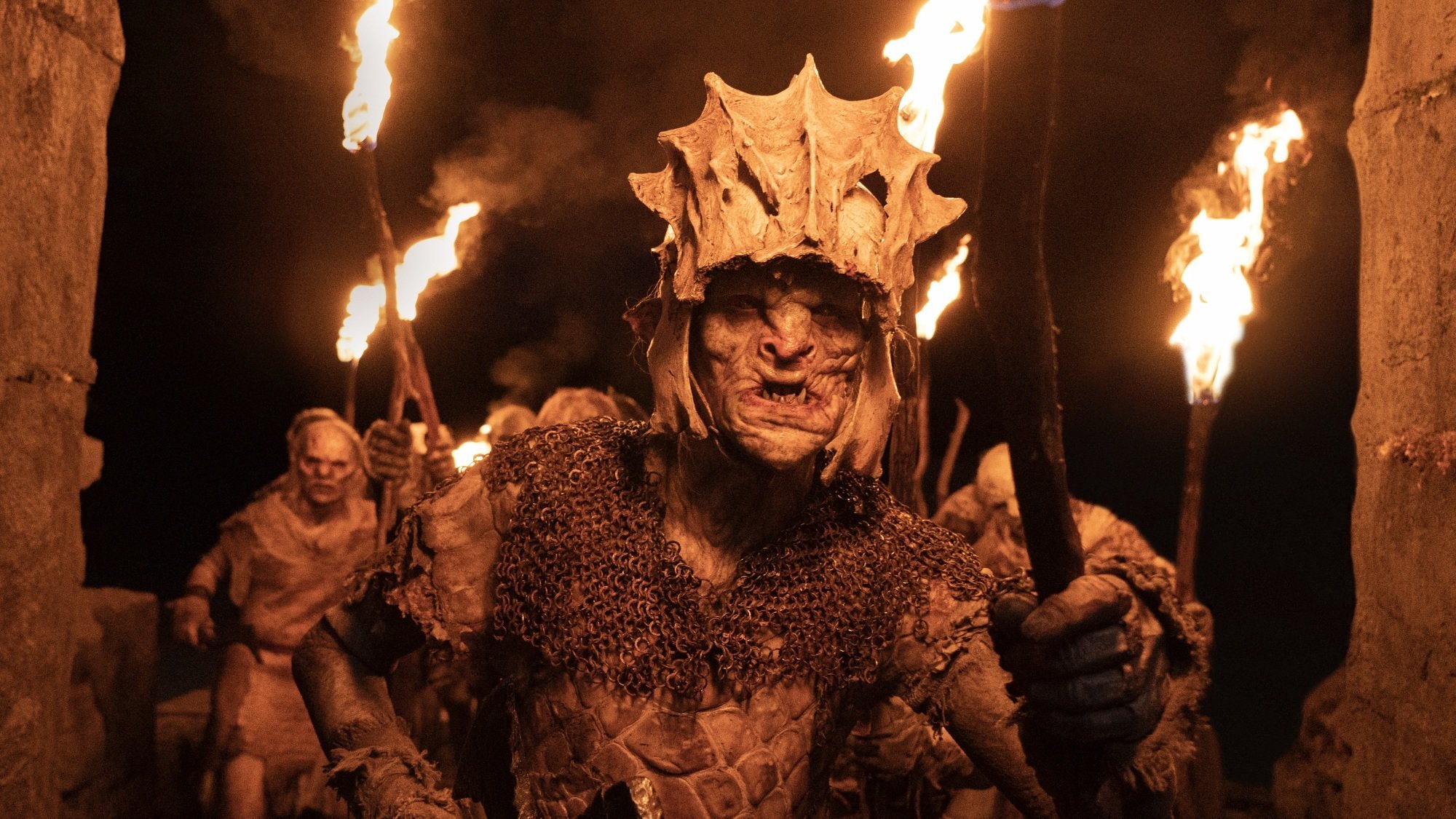 Reviewing or just plain watching a streaming show that releases its episodes weekly encourages reflections that stretch beyond the confines of whether the final product is to our taste or not. In the case of The Lord of the Rings: The Rings of Power (ROP), savvy audience members and critics may be encouraged to ponder how the first season’s story arc and pacing were planned. Even cursory browsing online for reactions, including some of this author’s feelings, reveals that more than a few people felt the show lacked moxie and that the plotting trudged along lackadaisically. Episode 4 was something of a slog and episode 5 – which relished in charming, Tolkien-inspired dialogue – oddly concluded in the same way as episode 4.

As if to answer the cries of frustration (or as part of the master plan), the sixth instalment, “Udûn,” as directed by Charlotte Brändström, roars to life from the opening moments and doesn’t let up until the end credits appear. Not long ago this weekly column suggested the idea of having full episodes concentrate on a single group rather than divide the 60-70 minutes between 3 or 4 collections of characters. Little did viewers know what awaited them with “Udûn.” There are no Dwarves, Harfoots, or Elvin roundtables discussions this week. Rather, we witness the beginning of the Second Age battles in the Southlands.

The entirety of the latest episode is spent in the southern lands where Bronwyn and Arondir have successfully convinced the remaining Humans to make a stand and defend their territory against the approaching hoard of Orcs, led by Adar. Director Brändström and the creative team get very clever in “Udûn.” The opening scene features Adar leading his grotesque army into the previously seen watchtower fort. Confused as to why no Humans are around, they are caught off guard by Arondir who, with typical Elvin grace, springs a trap that destroys the fort and liquidates a chunk of Adar’s troops in the process. This is all in the episode’s first few minutes. If anyone growing impatient with ROP’s pace is worried that the filmmakers have tricked them with a quick skirmish at the start, the best is yet to come.

One shouldn’t hype the latest instalment too much. It would be foolhardy to expect a Battle of Helms Deep or of Gondor in episode 6 of ROP’s first season. Even so, the showrunners were evidently holding back on the bloody, delicious action in favour of laying the breadcrumbs for a few weeks. Was it worth it? A level-headed response is that that will be determined over the course of the final two episodes. They may be terrible. Anything is possible. That said, “Udûn” lives up to what LOTR fans love when thinking of the great battles depicted in previous cinematic iterations of Middle Earth. It’s also reminiscent of ROP’s brilliant premiere episodes that both showcased lavish, large-scale set pieces that subsequently vanished for 3 consecutive weeks.

Furthermore, “Udûn” intelligently weaves character beats and story into the action. The best adventure and action films or shows are the ones that marry what the adrenaline junkies desire with storytelling. Arondir and Bronwyn’s love takes a giant leap forward despite that they spend most of the episode fending off their assailants. Galadriel’s desire to vanquish Middle Earth’s great foe Sauron is given a skin-crawling, dark twist. Finally, the Numenoreans demonstrate why they see themselves as so powerful. Spoilers: because they are, by way of slaughtering Orcs left and right.

Back to the argument about ROP serving its story by having individual episodes concentrate on a smaller number of characters, by the end of “Udûn” there is a sense that a satisfying amount of time was spent with Arondir, Bronwyn, Theo, Galadriel, Halbrand, Isildur, and the rest of the soldiers. It feels as though the show took the viewer on a real journey through a harrowing night and a blistering, wild day. Prime Video’s teaser for next week’s episode hints that viewers will continue the migration with the Harfoots and the mining of Mithril with the Dwarves, but that’s okay because the story of Galadriel, the Numenoreans and the Southlands has sufficiently advanced for now.

ROP is also beginning to shed light on how dark and evil Middle Earth can be. Without revealing too much, Adar’s manners of getting what he wants are twisted and vile. Galadriel’s hatred of the Orcs and Sauron makes her sound just as bad as they are. In fact, the hatred each side has for the other masks what they both seek: peace and a home. Fans know that the Orcs are, ultimately, the villains of LOTR but Adar makes a strangely compelling case that his children too have hearts and aspirations. How much the showrunners want to play in that curious sandbox remains to be seen, but it’s an interesting idea.

The game of one-upmanship is expertly played throughout this latest chapter. Each successive skirmish is larger and bloodier than the last. The creative team does not shy away from showcasing the horrors of war. A lot of people get arrowed in the back in slow motion, and eagle-eyed viewers will notice Orc limbs flying off as Numenor horsemen trample their opponents. For its coup de grace, the episode concludes with one of the biggest revelations the season had kept under wraps. Up until now Adar’s plans had been suggested and briefly alluded to, but nothing very concrete was known. That is until the final moments of “Udûn.”

The Lord of the Rings: The Rings of Power will return next week!

-The few times Arondir has been seen in action, ROP delightfully had the Elf display balletic feats of heroism. In “Udûn” he comes face to face with a foe more powerful than he can handle and it shows. It’s a little surprising to see an Elf can get the living daylights kicked out of him.

-Adar’s history is revealed after losing to Galadriel and the Numenoreans. We suspected he was half-Elf, but it appears he is fully Elvin. Galadriel recounts details the First Age history when Morgoth enslaved Elves to help grow his own power. Adar is a product of that chapter.

-Halbrand isn’t seen too much this week, but what little screen time he’s given is rewarding. After winning the battle against the Orcs, Bronwyin and the Southland people recognize the crest on his armour and welcome him as their king. Halbrand responds with a humble smile.

-In one of the great moments of ROP thus far, the sweetness of victory for the Humans after their nighttime battle is short-lived. The previous episode showed that some Men had joined forces with Adar. Those same people, heavily clothed to conceal their identity, were sent into battle. Bronwyn and her people are horrified to learn afterwards that they essentially killed their own. Ouch.

-Well, there really is only one thing to talk about this week, but what a moment! We now know what the “key” Theo had found opened. It operates a long-dormant mechanism that causes a nearby volcano to erupt. The key opened the passage to Udûn, a word the Orcs chant throughout the episode. What is Udûn? As mentioned a few times in the Tolkien books, is a place. A valley, really. A valley in…Mordor! Fires of Mount Doom, anybody?!?