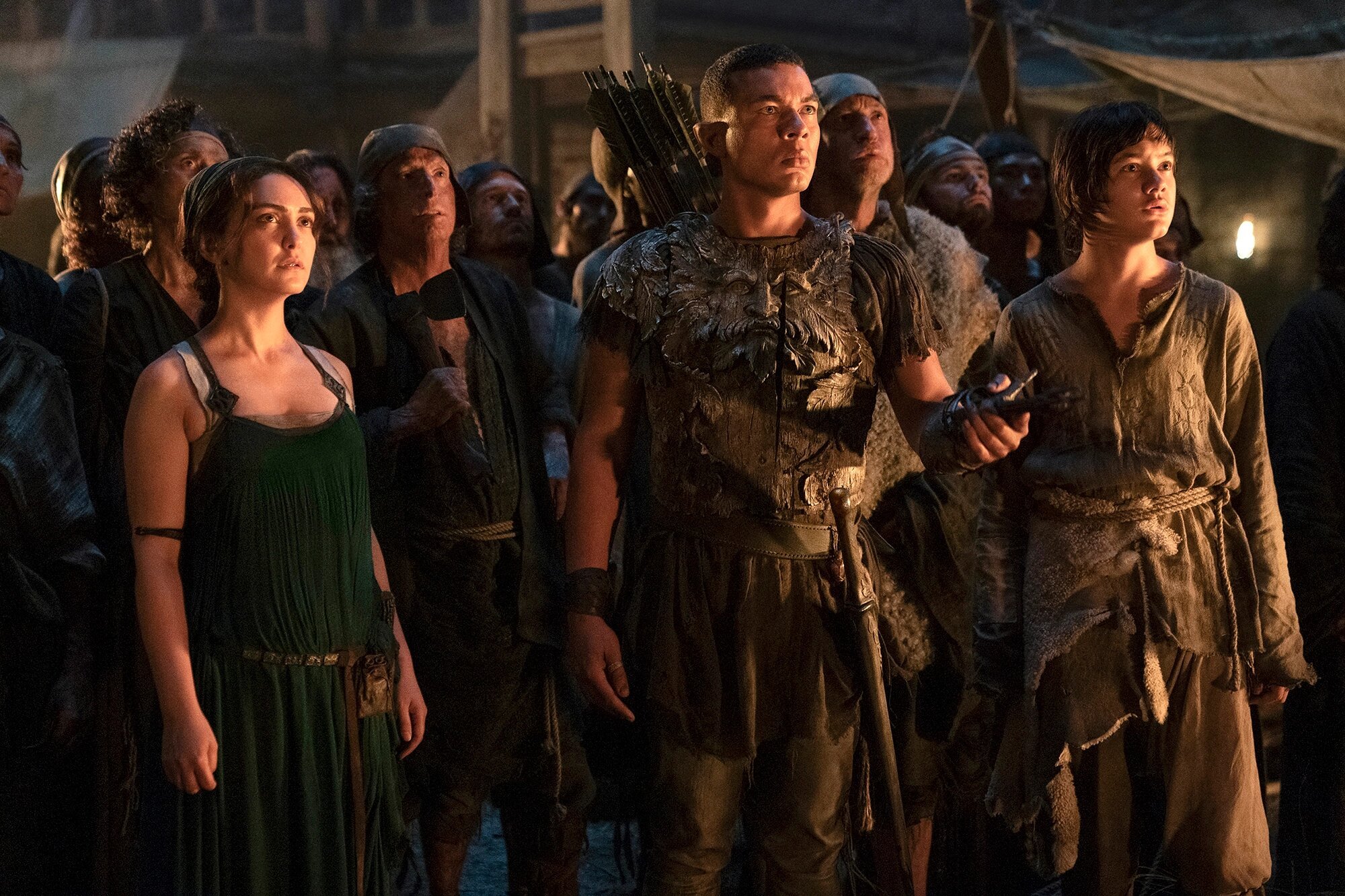 These heady ideas guide “Partings”, the fifth episode of The Lord of the Rings: The Rings of Power (ROP). When we last met the vastly spread-out groups of characters, the story’s pace slowed down considerably. Small hints were dropped, suggestions of dangers were made, visions were seen in the mind’s eye, but not much of substance had transpired. “Partings” partially rectifies that faux pas. Wayne Yip once again sits in the director’s chair (his third effort), but this time principal screenwriter duties are filled by Justin Doble.

For the first time since starting these weekly reviews, the choice of a scribe makes a significant difference in how an episode plays out. The uptick in quality rests primarily with the dialogue exchanges, for although the plot itself still moves slowly (with more significant developments than last week at least), the conversations between the different sets of protagonists are floral and hefty. At the risk of flirting with heresy, “Partings” is one of the few times since the show’s debut that characters speak in a manner echoing Tolkien’s style. Let’s not get crazy, it isn’t perfect, but the dialogue is inspired, varied, and sports a grander theatricality than what’s been heard for the past couple of episodes.

This deliciousness is peppered across the many scenes and critical exchanges that see the episode through. For instance, Halbrand (Charlie Vickers) and Galadriel (Morfydd Clark), who have diametrically opposed views of where their respective journeys should take them, engage in arguably their most convincing tête-à-tête yet. These are two characters who have showcased essentially the same traits since viewers first met them. The Elvin warrior is steadfast and perhaps overconfident, whereas the Southlander is sarcastic and standoffish. With the Numenorean Queen Regent (Cynthia Addai-Robinson) demanding that they make a final choice regarding their fate, one that will help guide what Numenor itself does next, their powerful scene exposes a duology of themes.

For one, their relationship has been tempestuous at the best of times and perhaps the iciness needs to thaw. Second, their faults are exposed. Halbrand feels the tremendous weight of living up to the heraldic duties expected of him, to say nothing of making up for his shameful past. He can remain cozily ensconced in the corners of lavish Numenor, but nothing will ever change about what he has done and should do next. As for Galadriel, she finally admits to an unshakable obsessiveness that pushes her yonder to constantly fight. It has become a poison, of sorts. So powerful is this feeling that it has blinded her to the opinions of others.

The Halbrand-Galadriel scene is a shining example of what writer Justin Doble brings to the table. That same energy sparks several scenes throughout “Partings”, including Isildur (Maxim Baldry) asking for forgiveness from his friends for getting them expulsed from the naval academy. Arondir (Ismael Cruz) and Bronwyn (Nazanin Boniadi) are confronted with two choices that will determine the fate of the local Humans in opposite ways. Durin (Owain Arthur) and Elrond (Robert Aramayo) see their friendship put to the test just as the Elf learns of the prescience of Gil-galad’s (Benjamin Walker) request to align with the Dwarves.

Dialogue, good dialogue, accomplishes great things. It isn’t as if “Partings” presents many significant plot developments. The Orcs inform Adar (Joseph Mawle) that the tunnel is complete (to where exactly we don’t know). Some humans pledge allegiance to Adar, believing him to be Sauron. The Brandyfoots continue their perilous migration, this time through some eerie woods and have a close shave with local wildlife. Finally, it is revealed that an old Elvin tale holds the truth about what may be hidden deep down below in the caves of Khazad-dûm.

It would be presumptuous to argue that these developments mean nothing. Surely they advance the story to some degree, especially the revelation regarding what both the Dwarves and Elves seek via their collective agreement. Such details will have consequences for both the rest of ROP and, by extension, the Third Age already depicted in Peter Jackson’s LOTR and Hobbit trilogies. What viewers get in this fifth installment is very good character development, even if the story advancements feel slight at first glance.

Not everything works. Unbelievably there is a moment in which a single character wearily makes their way into a quiet, spooky area, only for a friend to inexplicably grab their shoulder without warning. Galadriel trains a party of young Numenoreans to improve their swordsmanship, which itself makes sense as she is a general in her army. Only she challenges the youth to leave a flesh mark, prompting the hopeful soldiers to swing their blades around as if they want to decapitate her. It reinforces how skillful Galadriel is with a weapon, but audiences already knew that from the first episode. Finally, there is something to be said that last week’s chapter concluded with Queen Regent ordering the navy to ready its troops and masts for an expedition to Middle Earth to face the enemy. This week’s instalment ends with…the Numenor navy setting sail for Middle Earth to face the enemy.

Adar proves to be a compelling antagonist mostly because actor Joseph Mawle (of Game of Thrones fame) relishes the opportunity to play a juicy Middle Earth baddie. Details about his identity are kept deliberately vague despite that he has been seen in the flesh for two full episodes at this stage. He looks villainous and the actor is playing the part to the hilt, so it works.

As if right on cue, “Partings” introduces even more characters. The show is vague as to who they are. All that can be ascertained for now is that the arrival of the Stranger appears to be of great concern to them. They only have a single, brief scene, and utter no words. One hopes the showrunners really know what they’re doing. There were already more than enough character threads to weave before introducing a whole new gang.

-For the time this season, actor Ismael Cruz, who plays the Elf Arondir, gets to shine. His character had shown off some spectacular action prowess, but his personality hadn’t shone through very much. Arondir’s respect for the Southlanders is admirable.

-We now understand that the shard Brownyn’s son Theo carries with him is in fact a key. Said key is honoured in a wood-made altar in a Southland fortress. What door it potentially opens, no one knows now, but its existence and presence in the South further emphasizes its people’s ties to the Morgoth in the previous Age.

-Should we be wary of the Stranger? The guessing games among the viewership continue as to the character’s identity, but “Partings” displays some visual cues suggesting that his purpose may not be altruistic. He’s still confused about his own identity. Is he a harbinger of evil without even knowing it?

-When Elrond is asked by Gil-galad to recount the tale of a great battle atop the Misty Mountains, the show cuts to a re-imagining of said encounter. Two things are revealed that should get Tolkien geeks excited. Number one: it appears the tale of yore explains how a great source of energy and power emanating from a tree seeped deep into the mountains, thus giving birth to Mithril, itself containing the light of Silmaril.

Number two: the battle was between a legendary Elf and a Balrog, which looks just as terrifying as in the LOTR trilogy.

-As the Harfoots migrate, Poppy begins to sing a song about the adventurous and challenging culture of travelling. The song is decent and pays homage to the importance of that art form in Tolkien’s work. Stories, histories, romances, and keen words of wisdom are often shared through poetry and song in the “LOTR” books.

A Gaza Weekend is a Breezy Satire Stretched Thin

Sixteen Things You Did Not Know About The Punisher