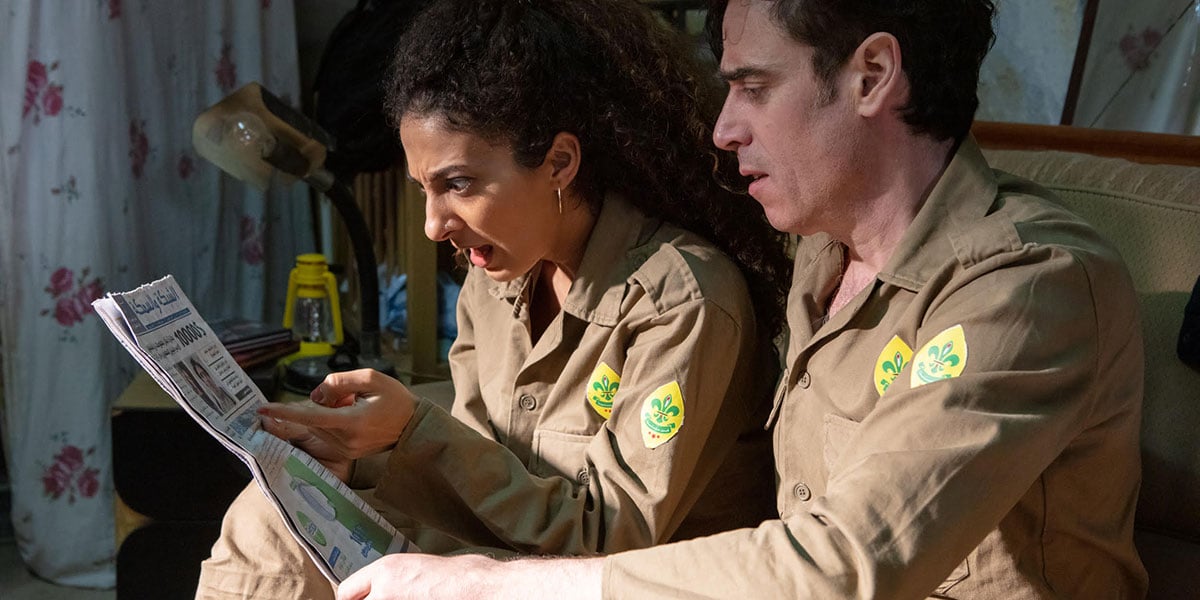 Basil Khalil’s A Gaza Weekend is the feature-length follow-up to his academy award nominated short, Ave Maria, which launched his career and cemented him as a bold talent to keep tabs on (heralded as one of the “Top 10 Arab filmmakers to watch” by Screen International magazine). Yet, his debut satire markedly plays it safe in every way possible, especially in the filmmaking department, as he creates a breezy, likable, but wholly surface-level comedy that is entirely too on the nose.

A Gaza Weekend distinctly feels like a TV movie that is very limited in scope and cinematic design, as its technical choices—specifically its hand-held cinematography and slap-dash editing—mire the film in a series of contrivances, ultimately riding a wave of glibly entertaining gags to its narrowly crowd-pleasing finale. There is no denying the film is endearing and, at times, funny but it inherently lacks the vision, wit, and bravado needed in a satire. As a result, it wholly misses the targets it sets up.

The film imagines a world where a virus known as ARS breaks out in Israel, forcing a mass exodus that is impeded by stringent travel restrictions and heavily defended borders. Among them are Englishman Michael (Stephen Mangan) and his restive Israeli wife, Keren (Mouna Hawa), who find themselves stranded amongst the lockdowns. Their only hope rests on being smuggled into Gaza, which due to its signature separation wall, is ironically the safest place in the world.

Their lives rest in the hands of two bumbling Palestinian hustlers (Adam Bakri and Loai Noufi, who is the film’s standout) who spend their days selling imported goods and masks made from bra cups until the outbreak gives them the opportunity of a lifetime. Once they are contracted to help the couple escape into Egypt, hijinks ensue as the fleeing duo is forced to hide in one of the smuggler’s basements, much to the chagrin of his wife (Maria Zreik) and mother.

The film’s interesting, seemingly thought-provoking premise loses its provocative edge quickly, due to an incessant need to be overtly funny, relying on a steady stream of repetitive, one-note gags and quips that pander to the audience. More often than not, its comedy feels forced, as it fumbles its way through a few profound observations, and a plethora of obvious ones. Throughout its gauntlet of fun, cursory jokes, the film is never as deep and biting as it thinks it is.

Where it does succeed is in its’s cultural leanings, as it embraces the idiosyncrasies and mannerisms of the people and experiences it hopes to highlight. The decision to have the dialogue spoken primarily in Arabic and Hebrew is one that pays off, allowing for a heightened immediacy to underpin the hijinks, making it that much more endearing. This effect is elevated by Loai Noufi’s turn as Emad, whose bumbling huckster is a delight to behold, actively emboldening the film’s more uninspired detours and gags.

It’s a shame that his talents weren’t part of something more clever and inventive in its cinematic conception. The dull colour palette and hammy faux-VHS filter begin to take a toll on the momentum of the film, as it limps to its conclusion on the back of familiar and tired jokes that were just made a few scenes ago.

A Gaza Weekend is an enjoyable, if wholly underbaked, satire that never rises above its surface-level jabs and gags, quickly stretching its central concept thin. It will strike a chord with those more versed in its commentary on the Israel-Palestine conflict, but as a cinematic experience, it doesn’t quite come together in a way that will be remembered soon after the credits roll.