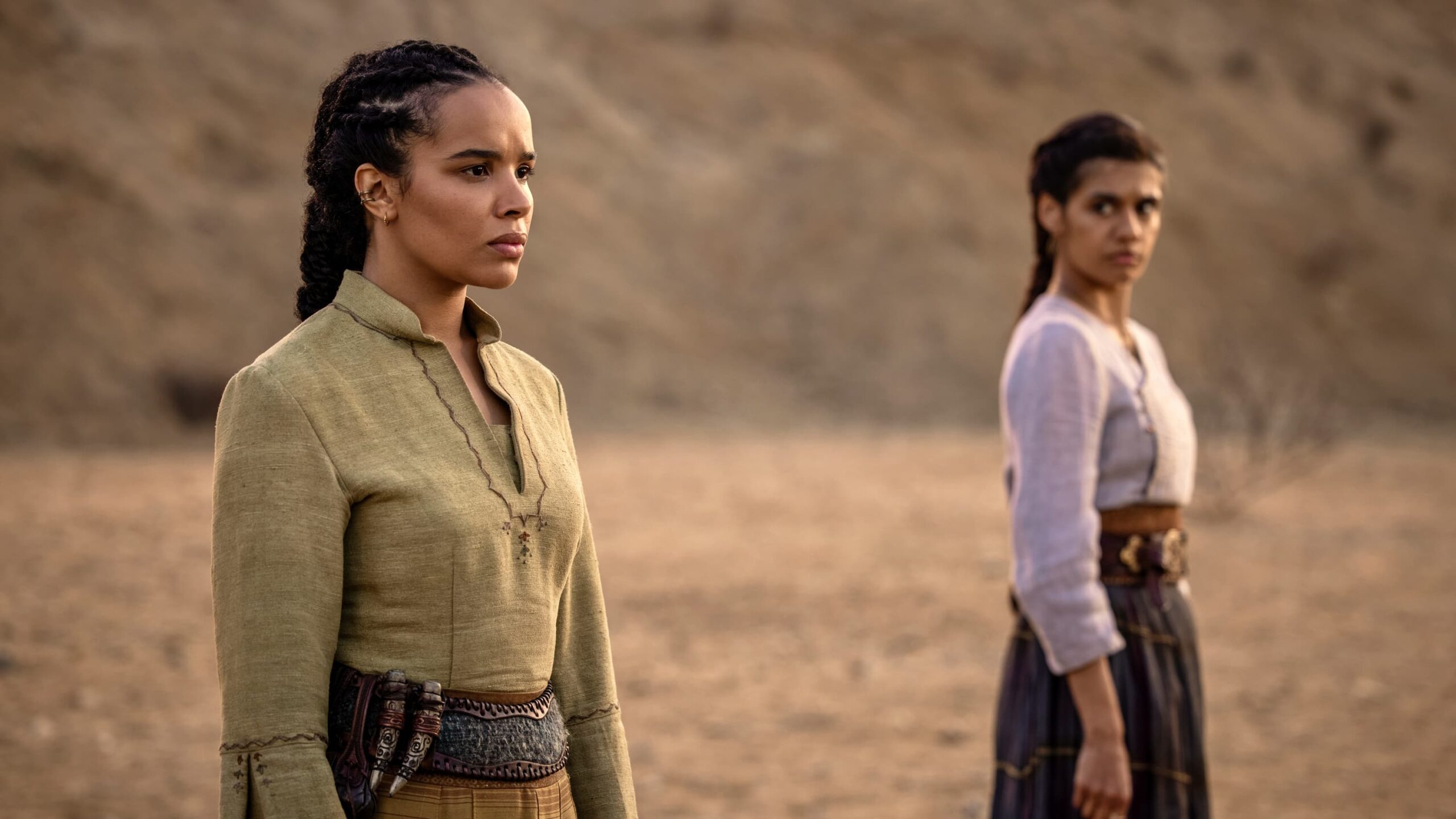 It’s finally here! If you’ve been watching Amazon Prime’s The Wheel of Time then you know that Christmas came early for fans, as the final episode of the season premiered today. While it wasn’t the season’s strongest episode—we have to give that to episode four, “The Dragon Reborn“—it was definitely worth watching and sets us up for what promises to be an equally compelling second season.

What Happened In the Finale?

“The Eye of the World” picks up where we last left our group: Moiraine (Rosamund Pike) and Rand (Josha Stradowski) heading to the Eye of the World alone after Rand’s revelation in the penultimate episode that he’s the Dragon Reborn. The two of them travel through the Blight to find where the Dark One is being kept. Along the way, Rand has a dream in which the Dark One kills Moiraine and tells Rand that his father is not who he thinks it is.

We then rejoin the rest of the group in the halls of Fal Dara as they discuss what to do about Moiraine and Rand. Lan (Daniel Henney) explains that Moiraine is preventing him from feeling his bond to her but Nynaeve (Zoë Robins) explains that when she tracked the pair from Two Rivers it was because Moiraine always leaves an accidental tell. She explains to him how to find her and the two share an intimate and vulnerable moment. Once he Leaves, Nynaeve and Egwene (Madeleine Madden) join two other women in assisting Lady Amalisa (Sandra Yi Sencindiver) channel the One Power to help defend the city. Her brother, Lord Algemar (Thomas Chaanhing) leads an army to help fight off the advancing Trollocs but dies in combat. As the Dark One’s forces descend upon Fal Dara, the five women link together and use magic to keep the enemies at bay.

Unfortunately, Lady Amalisa’s grip on the One Power is unsteady and she kills two of the women and is about to accidentally kill all of them until Nynaeve interferes, saving Egwene but dying alongside Lady Amalisa in the process. However, Egwene manages to channel the One Power and bring Nynaeve back to life.

We also follow Perrin (Marcus Rutherford) and Loial (Hammed Animashaun) as they wait within the city walls. Perrin wants to help but doesn’t know how, and Loial won’t fight as he follows the peaceful path of the Leaf. The two end up helping the remaining royal guard dig up the Horn of Valere, which is meant to be blown by the Dragon Reborn during the Final Battle to call the heroes of the Light to battle. Unfortunately, the horn is stollen by Padan Fain (Johann Myers)—a minor character we meet in the pilot who travels to the Two Rivers selling lanterns and trinkets to the townspeople but is actually a spy and Darkfriend—who kills Loial using the cursed blade we’d previously seen Mat (Barney Harris) under the control of. He tells Perrin that while Rand is the Dragon, all five of them are Ta’veren—focal points for the Wheel—an unusual phenomenon as there’s only ever one or two in a generation. He says that the world needs balance and that some of the group will inevitably turn to the Dark One, something which is strongly hinted at as we get a shot of Mat walking towards what seems to be the White Tower.

We return to our heroes as Moiraine and Rand get to the Dark One’s prison. Rand falls unconscious—seemingly put under a spell—and Moiraine comes face-to-face with her enemy. Although the Dark One tries to win Rand over to his side, Rand banishes him and seemingly saves the day. Unfortunately, Moiraine is cut off from the One Power in the process and Rand’s worst fear is confirmed: men who can channel eventually go so mad they kill their loved ones. He tells Moiraine to tell the others that he’s died in the process and leaves her for a destination unknown. The episode ends with Lan finding a heartbroken Moiraine and we learn that this wasn’t the Last Battle, it was only the first.

A Great Conclusion to an Amazing First Season

The Wheel of Time is one of the few shows out right now that consistently put out great episodes that build tension, grow characters, and weave together a world full of magic and adventure. Even with the third installment of the series a bit slow, it helped establish the perils of the world ahead of them and how nothing would ever be the same for our group of young villagers.

“The Eye of the World” feels like a gripping conclusion to a masterfully assembled season. Although it didn’t quite have the same emotional punch that “The Dragon Reborn” had—as the One Power has demonstrated again and again that anything is possible—it still left audiences captivated and on the edge of their seat. It was a perfect balance of action and emotional drive.

The character development in this episode was especially good, with Rand finally showing us that he could be the partner Egwene deserved from the series’ onset. When he’s given the option to make the world in his image, the Dark One uses a fantasy of a domesticated and motherly Egwene to try and convince him to turn to the Darkness as it’s what Rand’s always wanted. But in a brilliant display of character growth, he asks the Dark One what about what Egwene wants. He explains that he loves Egwene because of who she is and what she wants, not despite this. It shows us just how far this hero has come and has us mourning his absence at the end of the episode.

We Can’t Wait for Season Two

If you’re a fan of high fantasy, masterful storytelling, compelling characters, or just love watching television with heart, then you’re absolutely going to love The Wheel of Time, available to stream on Amazon Prime. And while no details have been released for season two, we can only hope it’s as thoughtful and carefully produced as season one.