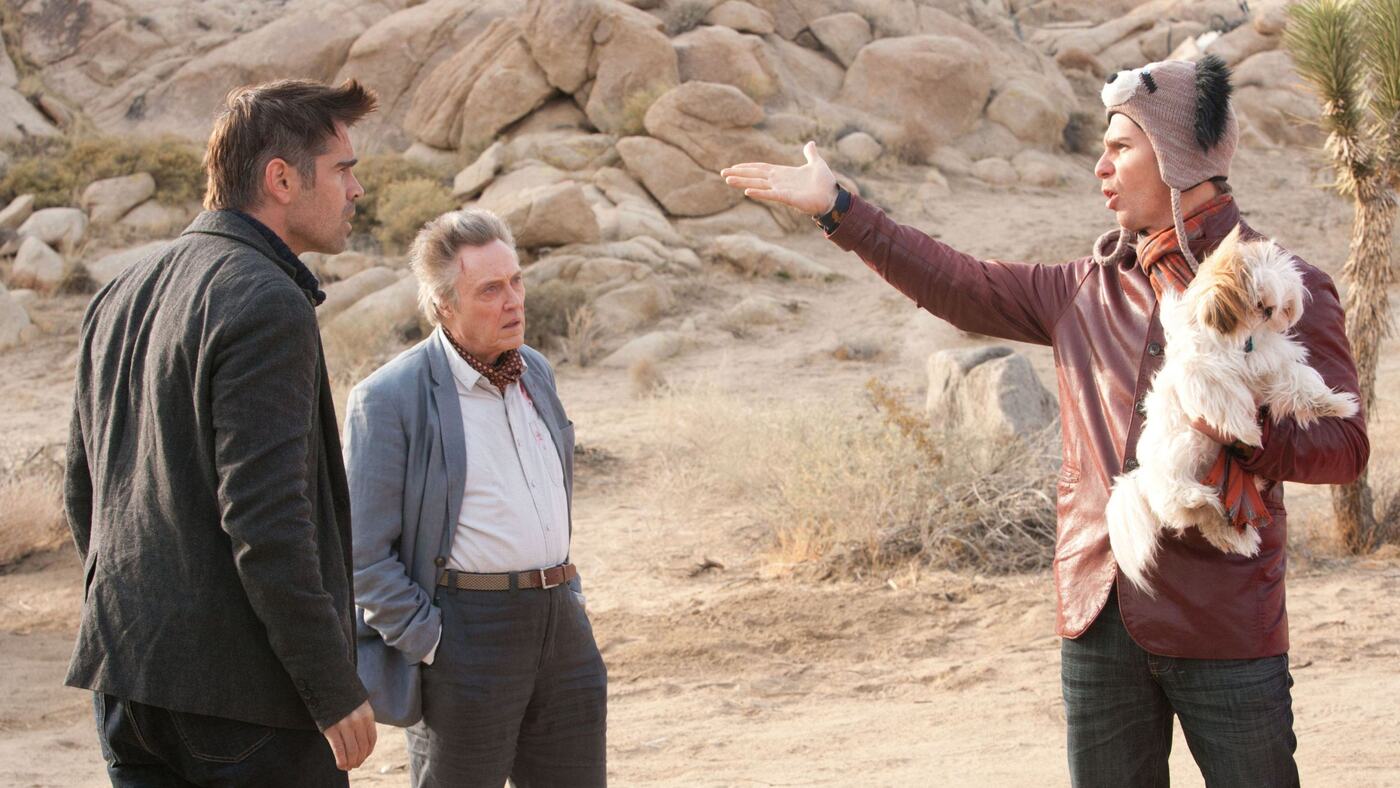 They Won’t Take Any Shih Tzu.

Demented fans of Martin McDonagh’s bruising In Bruges should go homicidal for Seven Psychopaths, his star-punctured, LA-set follow-up to his adored European debut.   Salting similar ground to his Brussels situated hit-men on the run caper, Seven Psychopaths unleashes a heptad of murderous killers in a sprawling and undisciplined miasma of cine-literate humour and blood-drenched comedy, a movie massacre which just about coasts along with some deft genre deconstruction and very funny lines. Like a cyanide-laced pint of Guinness it is blackly inviting and lethally charged, yet seems to ebb away like a chronic hangover once the immediate frisson recedes from the memory.

Struggling writer Marty (Colin Farrell) is having difficulty drafting his new screenplay Seven Psychopaths, searching for inspiration beyond the promising title he looks to his immediate life for a potential blast of creative fervour. His boozing, like the film, is slightly out of control and his relationship with girlfriend Kaya (Abbie Cornish) is also precarious, compounded by the offensive behaviour of his best friend Billy in another disheveled performance from repetitive scene stealer Sam Rockwell. Billy has a part-time gig as a dog-kidnapper with his scarf-draped partner  Hans (Christopher Walken), both engaged in a cunning scheme to return the sequestered animals in exchange for the beloved owners’ reward money, but their luck runs out when they decant the Shih-Tzu of crime boss Charlie (Woody Harrelson) and his goons explode their dogmatic scam. As the criminals ruthlessly hunt down the film interweaves aspects of Marty’s script and loosely defined legends and stories, as reality becomes blurred between their real-life predicament and Marty’s gruesome genre thriller.

This meta-film is all about deconstructing the cliches and tropes of violent movies that we all know and love, you don’t give your main characters the surnames Bickle and Kiewslowski without some postmodern referencing that the film wallows in, much to its brutal charm before the ideas and inspiration run dry. The typewriter font fractured interludes are probably the high points of the film, like mini movies they are nested in the narrative as scorchingly amusing meta-narratives, some of which warp into the main story in some intriguing and clever ways. All the actors – and this of course is quite a cast for any genre lovers – are let off the leash with pantomime broad performances, with Rockwell stealing the show as the slithering Billy, as for Christopher Walken, he’s clearly been set on Christopher Walken mode, with all the affectations, pauses, ticks and turns of phrase that have turned him into a parody of himself, but in the heightened reality of this film his role works, and he may be the only reason to give the film a second viewing.

The blood-spattered humour and playful deconstruction of the foibles and infrastructure of storytelling grind to a halt toward the end of the film, its enthusiasm and intelligence waning in the hot desert sun, although there are still some uneven laughs to be had  (Billy’s talk through of how he sees the script concluding in a delirious over the top shoot out may we the funniest sequence of the year) Seven Psychopaths exhausts its ammunition, it becomes a very jagged and uneven work which collapses into a series of vignettes rather than a coherent, rasping whole. Overall however the film is criminally funny, the exchanges between Marty and Billy being particularly enjoyable, and McDonagh even takes the time to tackle the lack of three-dimensional women in these testosterone sweating gun-plays. Oh, and Tom Waits is in it in a quite memorable performance, be sure to stick around for a post-credits callback which should have you exiting the theatre with a mild chuckle…..

The Banshees of Inisherin Explores a Friendship Turn Toxic