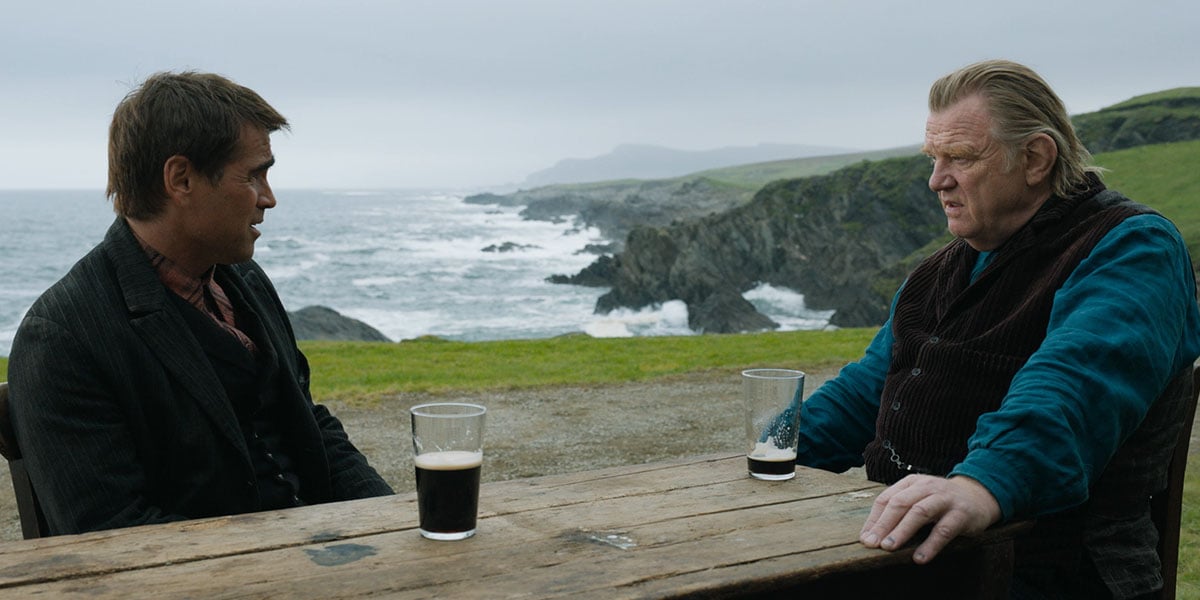 TIFF 2022: The Banshees of Inisherin Review

Martin McDonagh’s In Bruges is easily his best film; a perfect blend of pitch-black comedy, emotional performances from Colin Farrell and Brendan Gleeson, and a beautifully captured locale impossible to not enjoy. Since then, McDonagh has found plenty of success with Seven Psychopaths and Three Billboards Outside Ebbing, Missouri but they have not been without their detractors. However, fourteen years after his feature-length debut, McDonagh has gathered the team back together again for The Banshees of Inisherin – another pitch-black comedy that is far more ruminative. As it explores an era of uncertainty and the ways we measure how we will be remembered, the film cements itself as another stellar example of McDonagh’s prowess with the pen.

Taking place in 1923 on the fictional island of Inisherin, just off the coast of Ireland, the civil war on the mainland continues, though it seems to finally be winding down. However, on Inisherin, a smaller conflict is taking place that consumes the interests of the entire island. Pádraic (Farrell) and Colm (Gleeson) are the best of friends. That is, until one day Colm ignores a request to go out drinking and then tells Pádraic that he no longer wants to be friends with him anymore. Sudden and out-of-nowhere, The Banshees of Inisherin takes this slight and delves into a relationship between two men now reeling from their broken bond in different ways.

The reasons behind Colm’s abrupt decision to sever ties with Pádraic comes from a very relatable place. A conflict brewing across the sea spurs Colm to re-evaluate his relationships and whether or not he will ever be truly remembered like the great composers and artists he admires – now deceased but whose legacy lives on through their art. A struggling composer himself, Colm’s decision stems from the ticking clock that uncertainty accentuates just as many artists now may find themselves wondering how much time they have left to create that work of art in the face of global health scares and climate change.

Meanwhile, there are the ramifications of those decisions that manifest in Pádraic’s side of the relationship. Not the smartest person on the island, his only friends after Colm’s sudden change of heart are his sister, Siobhan (Kerry Condon), and the village idiot, Dominic (Barry Keoghan) – the former an intelligent woman longing to leave the boring lifestyle on Inisherin and the latter a victim of abuse from his father (who is also the island’s policeman).

It’s the internalizing that Pádraic takes on after Colm leaves him that provides Farrell with one of his best performances yet. A man suddenly left virtually alone because of someone else’s decision to sever ties – without even a conversation about it prior – Pádraic bears the brunt of the emotional pain from Colm’s choice. As the conflict between the two men rages on and Ireland continues to fight itself with the sound of gunfire making its way to the quiet island of Inisherin, McDonagh’s screenplay feeds the micro to the macro and vice-versa as it uncovers familiar themes of violence being the result of miscommunication and misunderstanding.

The screenplay is just another factor in why The Banshees of Inisherin is always fascinating even with such a small dispute happening at its center. As always, it’s witty and the black comedy flows effortlessly into the slowly encroaching darkness that Colm and Pádraic’s actions are unfurling. The idyllic coastal and hilly landscape of Inisherin and beaten down paths accentuate the simple beauties of the island, but within each building lays shadows, keeping gossip within their walls. The Banshees of Inisherin is as much a movie about a time and a place as it is about petty fights spiraling out of control – not unlike McDonagh’s equally immersive and dark In Bruges.

The screenplay here leans a little closer to Three Billboards Outside Ebbing, Missouri than it does the Irish writer-director’s previous films, but only slightly. It never takes detours with other characters, instead always navigating a broken friendship through those affected. Farrell and Gleeson’s performances are remarkable in their nuance as they start from a place of kinship lost to a fight to keep that bond broken and rekindled, respectively. They’ve had these conversations before in In Bruges but here there are years of friendship put on screen.

The masterful screenplay and tremendous performances force the minor conflict into being more than just a small spat between friends. The Banshees of Inisherin ends up more about relationships tested, the vitality of support systems in our darkest moments, and the unraveling of niceties. There’s almost nothing joyous to latch onto in McDonagh’s latest, and the way it gently lets the darkness wash over the island creates an environment that slowly becomes toxic to the point of being inhospitable. It’s a texturally gloomy film and a testament to McDonagh as a director that it’s still entertaining despite its devastating portrait of a friendship torn asunder.