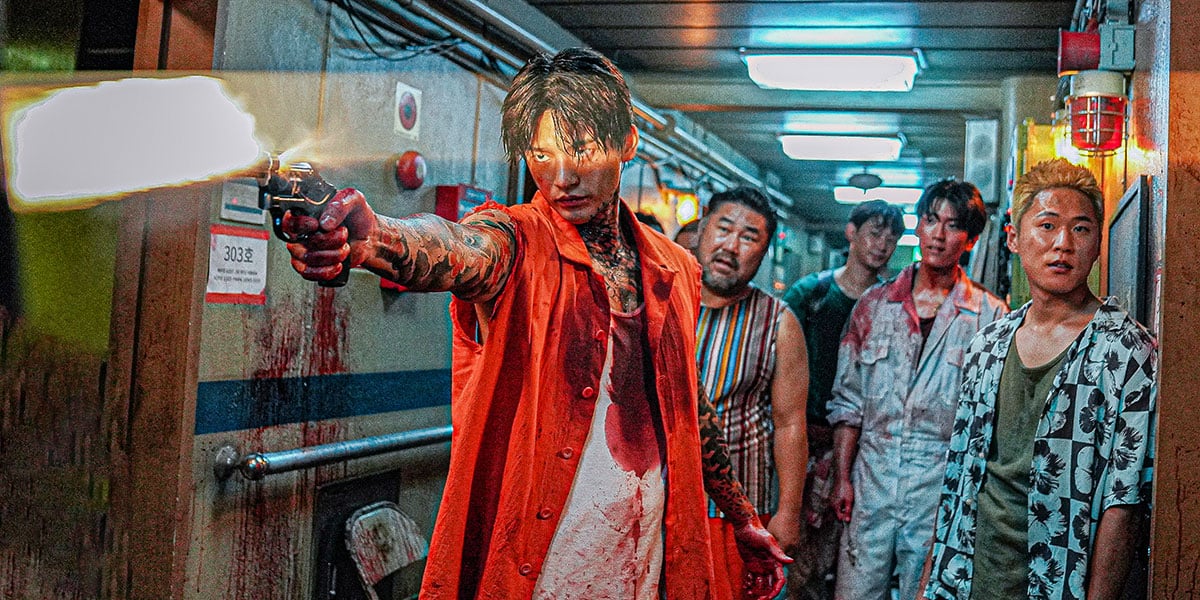 With its claustrophobic setting of a cargo freighter on the high seas, Project Wolf Hunting knows exactly what kind of film it wants to be. Employing a kitchen sink approach to its horror and action setpieces, police and convicts are forced into conflict unaware of the terrifying secrets lying below the ship’s deck. Kim Hongsun’s latest film doesn’t relent on the blood within its confined space but does skimp on its narrative and character nuance creating an action film that coasts on its thrills and violence without making any of it truly matter.

Despite its very simple plot, it’s very clear that Hongsun just wanted to set up something familiar so it could turn it on its head. An operation to return a group of Korean criminals back to South Korea from the Philippines turns into a gruesome riff on Con Air and then injects a third variable into the mix that elevates the splatter and the viciousness of Project Wolf Hunting. Each character aboard the freighter always seems to be harboring some tiny secret that makes things not as they seem, and as they reveal themselves so too does the film’s paperthin inception.

There are no themes or ideas that Project Wolf Hunting is exploring. Its best character is a criminal that leans into the bloodshed as the heir to an empire (a sadistic and fun performance from Seo In-guk) and another criminal that feels reminiscent of Assault on Precinct 13’s Napoleon as a convicted murderer (played by Jang Dong-yoon) who recognizes that in order to survive the trip he’ll have to work together with the police and the other criminals aboard. The “good” characters don’t ever evolve beyond their good intentions, often following the motions as law enforcement agents reluctantly shepherding murderers across the sea.

However, Project Wolf Hunting surprisingly uncovers a twist that reshapes the narrative and puts all the characters on edge soon after chaos breaks out on the ship. Criminals breaking free of their imprisonment aboard is the least of everyone’s problems and Hongsun makes a shift in the film that sends reverberations throughout the entirety of the film’s initial conflict. Which reiterates the fact that Project Wolf Hunting has very little interest in doing more than it needs to just get through from one action beat to the next.

There is a B-plot to the film that pertains to the secret hiding at the bottom of the cargo ship, but Hongsun’s expansion of it from a cool wrinkle to world building is haphazardly executed. More and more characters become attached to it that Project Wolf Hunting eventually just feels like it wants a sequel to exist more than to craft a cool genre exercise. Fortunately, what’s there is effective, but whenever the story maneuvers into the subplot it just feels more hokey than the visceral action happening on board.

Those squeamish to blood be warned because every kill in Project Wolf Hunting – of which there are an innumerable amount – is punctuated by an unyielding spray of blood as Hongsun subscribes to the splatter film approach and ensures that no inch of space or actor caught on camera is without blood. A crimson-soaked nightmare that frequently veers into the absurd with how preposterous it all is, Hongsun manages to balance the comical side of so much blood spray with the intensity of its foil to the cops versus criminals narrative. There are so many moments where someone who is very clearly dead continues to be maimed and tortured until there is not a single drop of blood left in their body – and it is surprisingly always effective.

Project Wolf Hunting does not seem interested in being more than what it is: a violent genre film imbued with creativity and hellbent on being the bloodiest film in history. Rob Jabbaz’s The Sadness and I-Fan Wang’s Get The Hell Out are recent efforts that give Project Wolf Hunting a run for its money, but what Hongsun does that the others don’t is it injects itself with a creative twist that makes all the sadistic levels of gore fun and horrifying at the same time. While it won’t move those looking for anything beyond its surface level thrills, Project Wolf Hunting is one of the most entertaining midnight films thanks to its commitment to maximalist genre fun.

The Banshees of Inisherin Explores a Friendship Turn Toxic