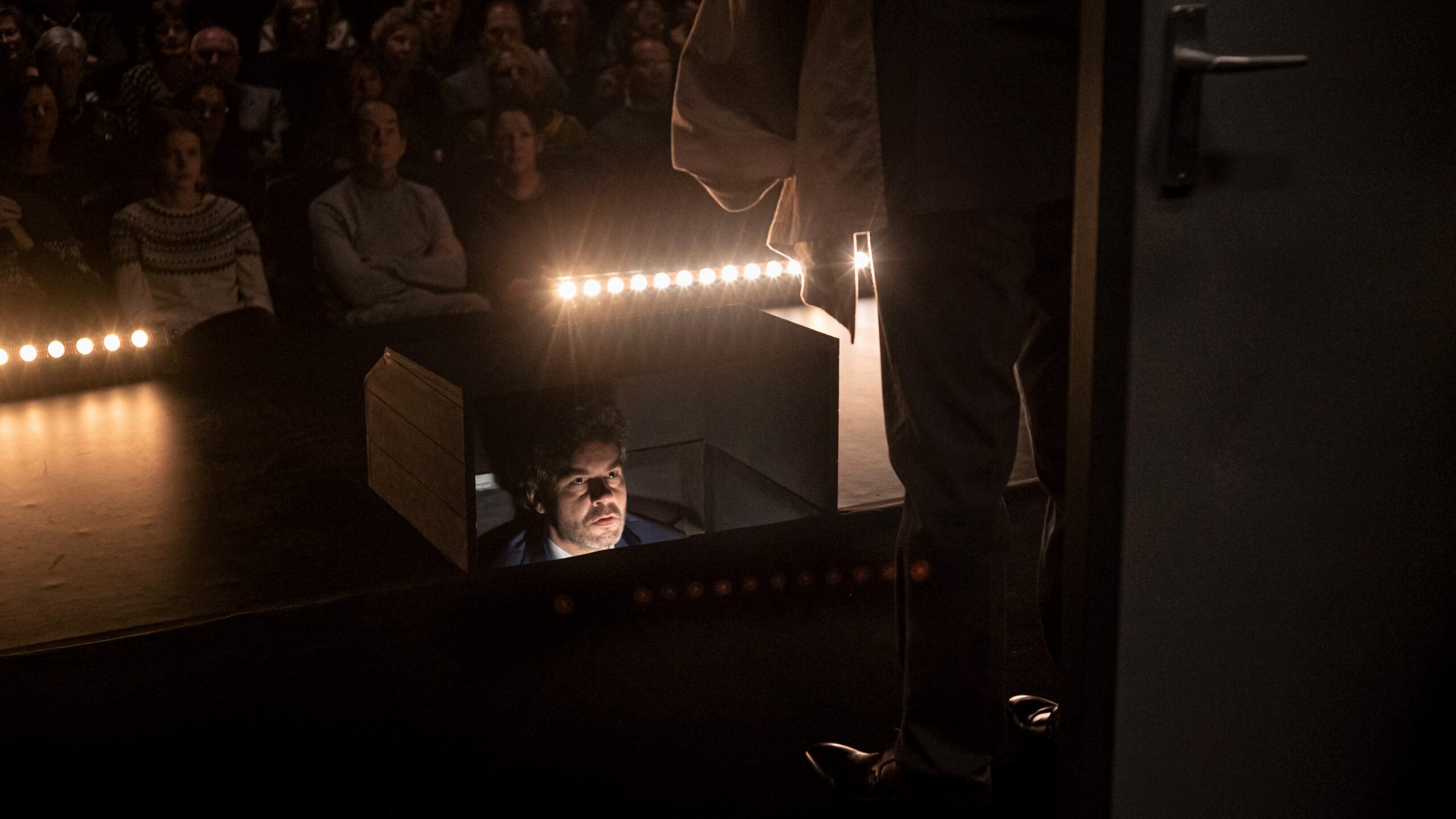 If weirdness was a weapon, Borgman director Alex van Warmerdam would wield it like a knife in a firm, assured grasp. Something surreal this way comes, and in his tenth feature-length film, aptly titled Nr. 10, Van Warmerdam continues to demonstrate confidence in building mystery and intrigue that adds thrills to an otherwise comedic, absurdist narrative – one that isn’t afraid to turn itself onto its head. While its mystery is far better staged than the payoff, Nr. 10 is a delightfully bizarre movie helmed by compelling performances and fascinating characters.

Van Warmerdam’s latest begins familiar enough: Karl (Hans Kesting) is attempting to direct a play while unbeknownst to him, his two stars, Isabel (Anniek Pheifer) and Günter (Tom Dewispelaere), are seeing each other after hours. Both are secretive about their relationship for their own reasons, but the strained relationship between Günter and his daughter Lizzy (Frieda Barnhard) is the real focus of Nr. 10 – even if the entire first act of the film seems completely uncaring about that relationship. It’s the fact that Karl is married to Isabel and unaware of her adultery with Günter that provides the catalyst for what amounts to an enigmatic, volatile soap opera unfolding within the pettiness of a director-actor relationship.

A tightly-wound mystery that maintains its odd tone by generally avoiding the bigger questions it begins to pose, Nr. 10 is exemplary in its doling out of information. Main threads are followed but other threads are introduced and dangled in front of the audience until the film decides its time to switch modes – and switch modes it does in a way that is initially exciting but unfortunately plods along at a snail’s pace. As it reveals more insight into the grander narrative that has colored Günter’s life since he was a child, its weirdness begins feeling far less compelling and more underwhelming as it goes on, and eventually Nr. 10 just peters out without really reaching out to the audience to ensure they even care about what’s going on.

Muted as its ending may be, it’s still somewhat delirious, and it’s impossible to deny Van Warmerdam’s excellent first act, which builds in such an exciting way by using familiar tropes and hinting at something far more enriching to its story. There’s a recurring bit where the story seems to take a detour and acknowledge a third party that feels akin to J.K. Simmons’ role in 2008’s Burn After Reading. Of course, here it’s far weirder, and why it exists is a spoiler unto itself, but it’s part of the surrealness that Van Warmerdam is always so playful within the face of reality. He often shirks the notion that drama should be dour and serious, and instead accepts the notion that absurdity is just as present as pain.

No one encapsulates this more than Dewispelaere as he takes a character like Günter and grounds his more absurd actions and behaviors in an otherwise consequential series of events. It’s a performance where the deadpan humor that Van Warmerdam often employs is delivered in a far more serious tone as if what is funny in the situation is actually far from it. There’s a sadness to Günter as a character because he doesn’t ever seem like he fully grasps reality or the idea of consequence. He is flawed, for sure, but you can somewhat tell it is the result of circumstances outside of his control.

The problems with Nr. 10 are not new to Van Warmerdam’s films (often more intriguing than the payoff ends up being), but for his tenth film, he continues to demonstrate the potential profoundness of eccentric filmmaking. The characters here and the situations they find themselves in are often heightened to their absurd extremes, but they also represent Van Warmerdam’s ability to excavate deeper traumas through surreal circumstances. Characters are more than just strange in their behavior; they are victims of the strangeness of the world and how easily things can seem right and then wrong at the drop of a hat. Nr. 10 offers a unique perspective on life, even if it can’t quite contend with its own narrative.

Broadcast News: When Love and the News Collide