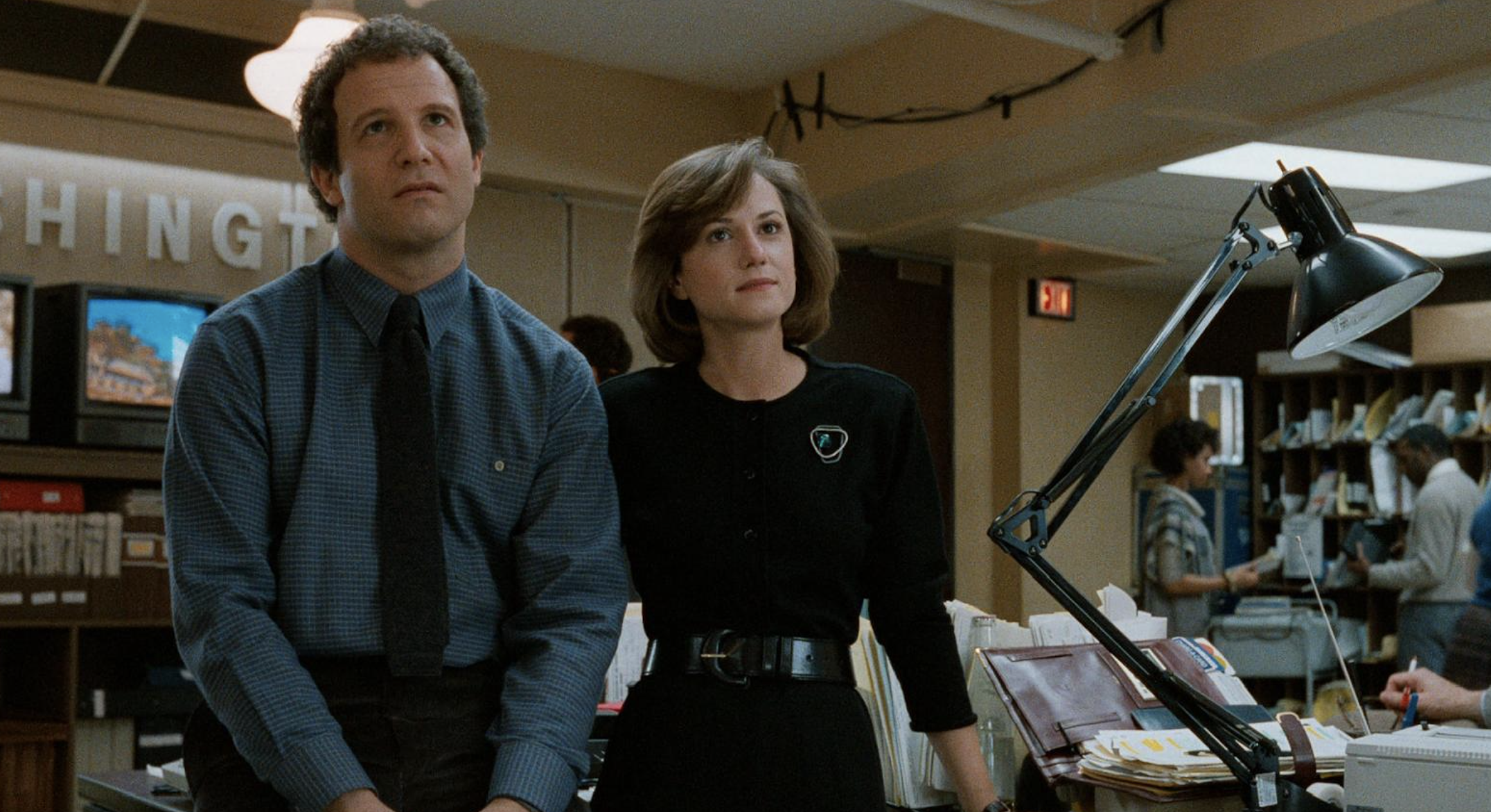 James L. Brooks’ Broadcast News arrived in 1987, 35 years ago this week, and it’s best remembered as a film that combined an exciting look at the behind-the-scenes of the TV business with a traditional romantic comedy/love triangle plot.

Also, since its hero is a crusading journalist lacking in social graces, and a major scene is set at the White House Correspondents’ Dinner, this is probably every media elite person’s favorite movie of the 1980s. It’s a workplace drama very much in tune with what things are like in a top-tier media company.

The film is set in a TV network’s news department, and the three main characters are Jane (Holly Hunter), a producer, Tom (William Hurt), a pretty boy reporter and anchor, and Aaron (Albert Brooks), a reporter who’s a lot smarter than Tom but not nearly as good on TV.

Both men soon develop feelings for Jane, but Aaron resents Tom for more than just his romantic success with the women he likes- he considers his very existence an insult to the journalistic profession, even comparing him at one point to the devil. The scene in which he rails against Tom’s lack of integrity before declaring his love for Jane — “How do you like that? I buried the lead” — is roughly in line with his priorities and that of the film.

Of course, in the movie’s most famous scene, Aaron gets the chance to anchor the news and ruins his opportunity by sweating visibly.

Aaron’s character is in line with a trope common today but not so much back then: He’s a “nice guy” underdog who really wants to get the girl, but his reaction to not doing so makes it clear he’s not such a nice guy after all.

“Wouldn’t this be a great world if insecurity and desperation made us more attractive?,” he said at one point. “If ‘needy’ were a turn-on?”

Journalists, of course, love this movie, even if they haven’t ever developed an uncontrollable crush on a coworker. It’s one that treats journalistic integrity as something worth taking seriously. And the late scene, in which the network carries out layoffs, is an undeniable gut punch to any journo who has been through a day like that (pretty much all of us have, although few of us have ever had the guts to reply to an offer of help with “Well, I certainly hope you’ll die soon.”)

Broadcast News was James L. Brooks’ third as director and the first he made since 1983’s Oscar magnet Terms of Endearment. He even brought along that movie’s leading man, Jack Nicholson, as a bit part of the top network news anchor. Jack may have the gravitas to be a news anchor, but he certainly doesn’t talk anything like one (he does get a great line, though, noting that the layoffs are “all because they couldn’t program Wednesday nights.”)

A modest box office hit, Broadcast News was nominated for seven Oscars, including Best Picture, Director, Screenplay, and all three lead actors, although none of the won. It lost Best Picture to The Last Emperor, although it’s fair to say that Broadcast News, Moonstruck, and even Fatal Attraction (as well as the not-nominated Wall Street) have endured better.

Broadcast News is not currently available to stream, although it can be rented on VOD platforms.

Saturday Night Fever is a Lot Darker Than You Remember

Nr. 10 is a Bizarre and Unsatisfying Oddity