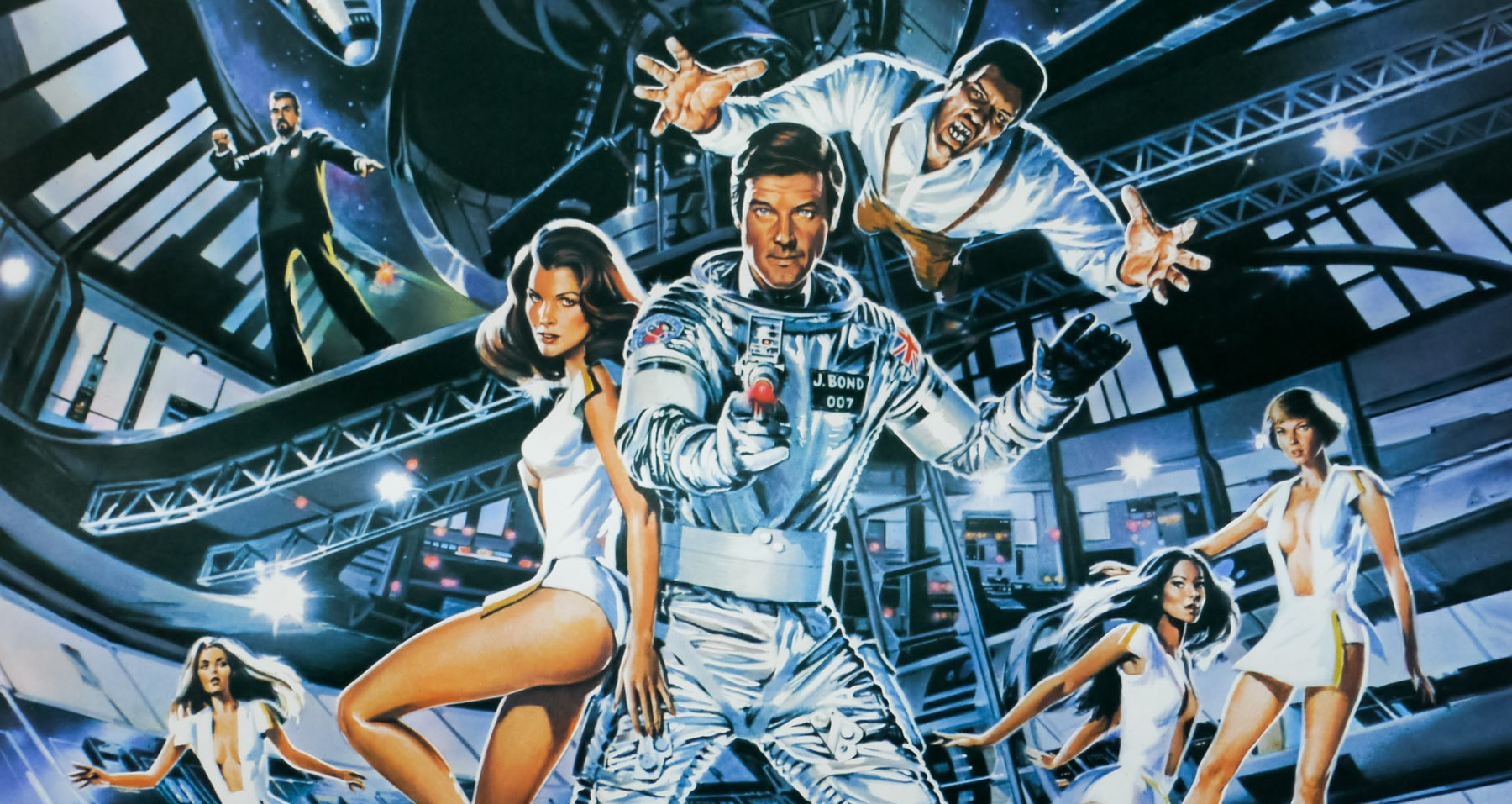 Moonraker has the unique distinction of being the most absurd and over-the-top Bond film produced in 50 plus years of the series. Spy films exist in a genre unto themselves, but the Bond films sometimes like to crossover into other popular genres as well. The first clear example of this was 1973’s Live and Let Die, which mimicked the then-popular Blaxploitation genre. When Moonraker was released, however, the Bond series took this genre crossover to its extreme, resulting in a Bond film as much a science fiction saga as it is screwball comedy. Certainly one of the strangest Bond films to date, Moonraker holds a unique admiration among Bond fans and remained the highest-grossing of all the Bond films until the release of Goldeneye in 1995.

Before Moonraker came 1977’s The Spy Who Loved Me which concluded with the end credit; “James Bond will return in For Your Eyes Only.” Then came the exuberant popularity (and profits) of Star Wars, also released in 1977. Star Wars’ popularity led to a barrage of memorable rip-offs from Luigi Cozzi’s Starcrash to Jimmy Murakami’s Battle Beyond the Stars. Bond producers also took note, changing their planned release schedule to push Moonraker ahead of For Your Eyes Only in order to capitalize on a then exploding interest in sci-fi epics. The third act of Moonraker is set entirely in space, complete with laser battles, keypads set to the theme of Close Encounters of the Third Kind, and a 2001: A Space Odyssey-inspired rotating space station. Adding to Moonraker’s space cred was the growing fascination with a then-developed space shuttle that NASA was preparing to launch only a few years later. Producers made the choice to use the SRS Space Shuttle model in the film to play directly into a worldwide fascination in next-generation practical spaceflight.

The ambition is apparent in the visuals, but where Moonraker fails is in its execution of story. Tightly packed with all of the elements of a Bond film, without regard for their cohesion, this often overwrought story too heavily relies on bizarre moments that come across more Mel Brooks than James Bond. Moonraker is structured around the same basic Bond outline the series tends to follow; Bond visiting a number of very exotic locales in search of clues leading to whatever villainous mastermind happens to be plotting world domination. In Moonraker, that super-villain is Hugo Drax (Michael Lonsdale), a space industrialist with plans of creating a new master race. All of the locations Bond’s investigation of Drax leads to are a bit too obvious. In their pursuit of grand set-pieces, producers seemed to overlook subtly for scale. Perhaps the worst moment in the film comes during a boat chase down the canals of Venice. Bond’s motorized gondola transforms into a terribly executed hovercraft that proceeds to drive across St. Mark’s Square in a scene derivative of bad slapstick. Campy scenes like this, as well as scenes with the return of giant henchman Jaws (Richard Kiel) instantly take viewers out of the story. A subplot in which Jaws falls in love with a short, pigtailed beauty, shedding his bad ways for good, plays just plain silly in a film that over-utilizes comedic cause where it should have focused on dramatic effect.

Roger Moore isn’t known for being the best of the Bonds, and here he seems to go out of his way to prove why. Where Connery sold Bond as sexy and smooth, Moore’s performance comes across as forced and rigid.  An awkward fighting style and over-obvious one-liners don’t help his case. Moonraker also has the distinction of having perhaps the most overblown (seriously no pun was intended), straight-to-the-point names for a Bond girl in all the films; Dr. Holly Goodhead (Lois Chiles).

Where Moonraker does succeed is in the exquisitely crafted set pieces by production designer Ken Adams. Adams sets, including a portable lab in a Venetian glass factory, a geometric space command center in hollowed Amazonian ruins and the space station itself, with its winding corridors of glass tubes, are all standout designs that succeed more than the films actors at creating the foreboding moods beneath the surface of the story. The greatest of all Adams designs is a conference room that folds in on itself, disappearing into the floor. Set beneath the thrusters of a space shuttle, the room is indicative of the famous war room in Kubrick’s Dr. Strangelove, another set designed by Adams.

At its conclusion, Moonraker is only a mildly amusing entry into the Bond canon. Perhaps Moonraker’s greatest flaw is its reliance on perpetuating the characteristics of the series without setting itself apart. Moonraker is a movie produced to be visually appealing above all else. Maybe it’s because the script was rushed to come out ahead of the already planned For Your Eyes Only. Whatever the case, the double entendres Bond fans have come to love fall flat to shtick in this installment of the franchise. Moonraker completely misses its mark, catering more to a generation captivated by Star Wars than the generation that grew up with Bond since 1962. Money wins again.