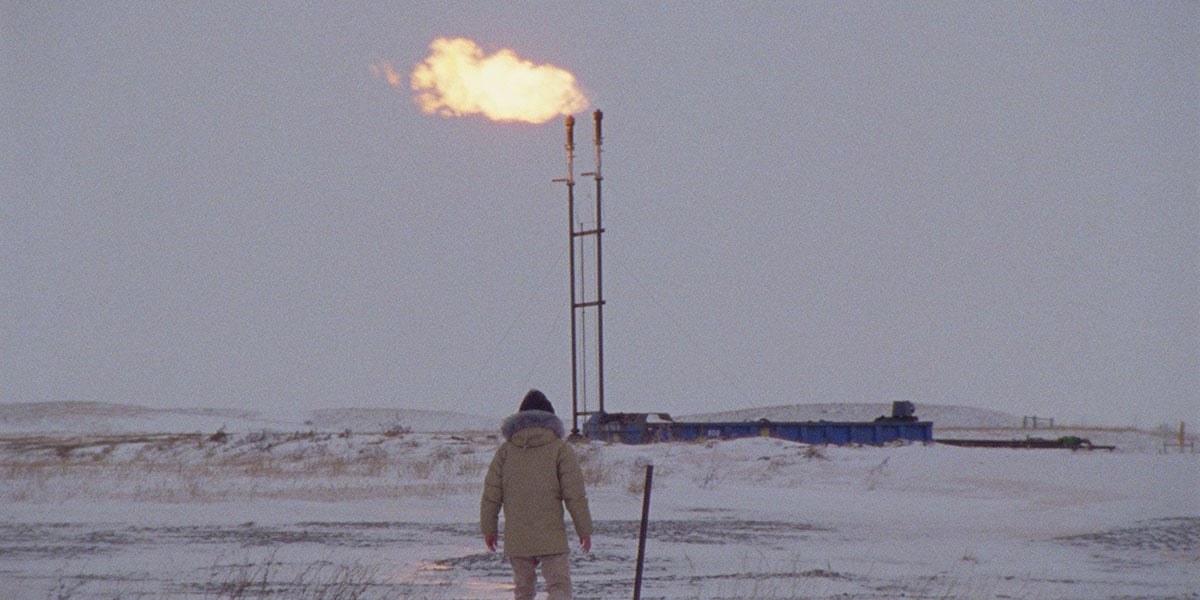 Daniel Goldhaber’s How to Blow Up a Pipeline isn’t just a well-executed environmental thriller framed as a heist film; it’s one of the strongest examples of a movie tapping into anxiety in a doomed civilization as the spark for rebellion. Distilling Andreas Malm’s 2021 non-fiction novel of the same name to its essence, Goldhaber’s sophomore feature is a taut exercise in ensemble storytelling that ratchets up the tension through perfectly executed flashbacks and a propulsive score. Carrying itself with a DIY and punk rock attitude, How to Blow Up a Pipeline is one of the most stirring and entertaining films concerned with the climate change crisis.

Very much a play-by-play of the teachings found in Malm’s treatise, How to Blow Up a Pipeline centers itself around a group of activists who decide that non-violent and passive changes in lifestyle are not enough to wake the world up to the increasing threat of fossil fuels and global warming. Instead, they subscribe to the idea that in order to make a difference they need to resort to alternative means such as sabotage. The only real rules are that it can’t be violent and it can’t impact everyday people. For example, slashing the tires of a Hummer would be okay but slashing the tires of a public transit bus would put everyday citizens in the crossfire and have a domino effect on their lives.

Punching a hole in a tire is minor though and ultimately does very little to raise awareness, so Xochitl (Ariela Barer) puts together a crew of like-minded individuals to set their sights on blowing up a pipeline in a remote part of Texas. Featuring an ensemble cast of young actors all portraying various characters affected by climate change in their own ways, How To Blow Up a Pipeline very quickly begins feeling politically charged as it deftly moves between its main plot and flashbacks to each character that emphasize why they’re in the fight in the first place. It’s a surprisingly effective use of flashbacks as well, each one tying into the specific beat of the narrative just as it matters most – never sacrificing the kinetic pacing of the film.

Carrying it along the entire time is Gavin Brivik’s pulse pounding score which builds and builds creating this tense atmosphere that combines well with the up-close cinematography from Tehillah De Castro and tight editing from Daniel Garber that keeps the film’s rhythm at a steady clip. Much like the ragtag crew that Xochitl assembles for their act of sabotage, How to Blow Up a Pipeline feels like its assembled the perfect crew to craft a film. In fact, parallels can easily be drawn between the DIY execution of the main plot and the way in which some films come together: a group of like-minded individuals who work together for a single purpose. It doesn’t have the gloss of a heist film like Ocean’s 11 and instead wears the fact that it’s a very grassroots and passionate undertaking on its sleeve.

What’s most effective about Goldhaber’s latest is that it still has the conversations around what the characters are doing and whether its a viable means of bringing about change. Nuanced in its dialogue between pacifism and activism, it does not disparage those who make the small efforts to make a difference but it does greatly emphasize the need for something more to be done. Where few will argue against its intent, the message might be a little too aggressive for some who aren’t willing to make the leap from protest to sabotage. However, How to Blow Up a Pipeline is intended to ruffle feathers a bit both diegetically and outside of the frame. After all, doing the bare minimum and expecting to see drastic results when most necessary is a fool’s errand.

There’s an incendiary tone to How to Blow Up a Pipeline like its fueled by a generation of anger and fatalism. The idea that society is on a path to doom but not everything has been tried yet ends up coloring the intensity of Xochitl and the rest of the crew’s journey. With a fantastic cast that channels that ferocity into a vast array of personality types each affected by climate change or the desire for a better world, Goldhaber’s screenplay works incredibly well at tightening the throughline while still feeding emotional stakes and nuance to each of its characters. A heist film is nothing without a little tension and How to Blow Up a Pipeline delivers that in an exact and propulsive manner.

Autobiography is a Haunting Study of Violence in Indonesia