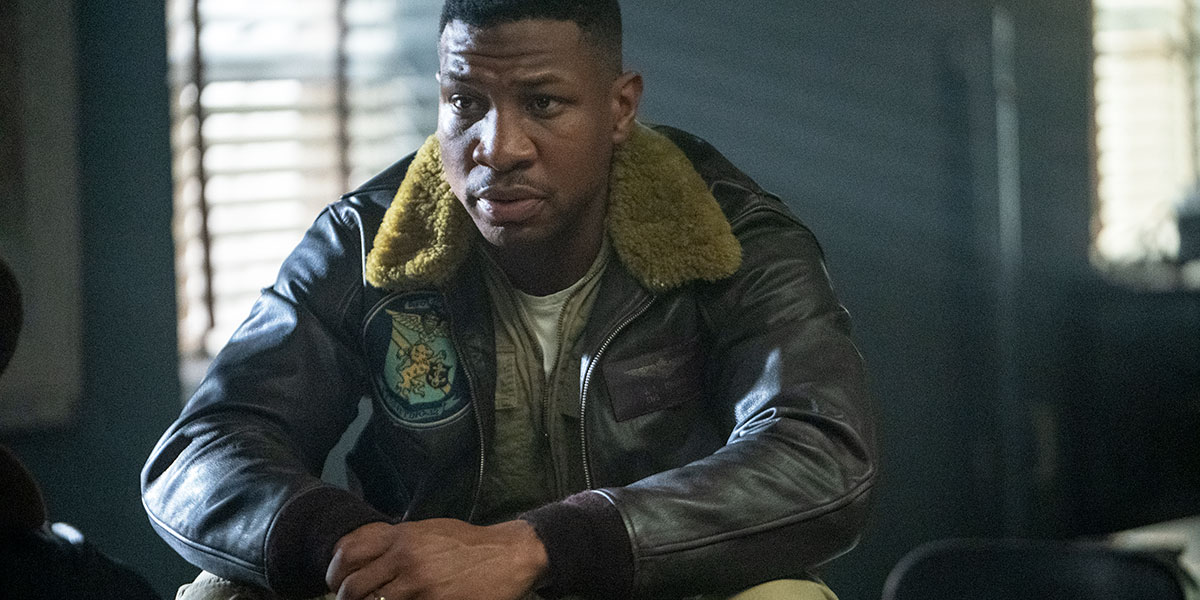 Conflict and struggle seem to be all Jesse Brown (Jonathan Majors) faces in his daily life. The US Navy’s first Black pilot, a cloud of racism looms overhead even when he himself is above the clouds. That strife that occurs both internally and externally is painted with a gentle, though occasionally bold, nuance as JD Dillard’s Devotion follows the pilot during the lead-up to and inclusion in the Korean War. Both a story of resiliency and a reminder of history’s forgotten heroes, Devotion never truly switches out of biopic mode but it does provide some stellar aerial photography to feast on and a complex character for Majors to embody with fervor.

The real star of Devotion is Majors, a talent already established and continuing to rise. Here he’s provided with material that continues to exemplify that star power right from the opening scenes as his charisma and internal struggles are painted with a subdued demeanor. A pilot who runs into racism in a predominantly Caucasian-filled US Navy more times than he can count, Jesse has absorbed the insults and hardened himself as much as possible to it. He goes to work, does his job better than the rest of his team, and then comes home where he can finally be himself with his wife and daughter.

It’s when Tom Hudner (Glen Powell, starring in his second aviation film of 2022) arrives on the scene and begins forming a bond with Jesse that Jake Crane and Jonathan A.H. Stewart’s screenplay begins exploring racism through an interesting though occasionally misguided lens. Tom’s naivety towards the racism that Jesse faces isn’t writ large, but it is apparent through the decisions he makes and the impact that it has on his new friend. Small things like a disagreement look worse on Jesse than it does on Tom, who already is being groomed to take the lead of Jesse’s squadron.

It’s the way in which Devotion seems occasionally more interested in Tom’s deluded perspective on things that ends up giving the screenplay an uphill battle. Systemic racism within the US Navy is not a new concept to explore and Dillard’s film doesn’t always seem inclined to lean into that, but it definitely does fall into a predictable trajectory more often than not. The friendship at its core between a White man and a Black man is earnestly captured and understands the nuances within that dynamic, but it also doesn’t push hard enough against the grain. It’s all fairly standard stuff and what makes Devotion work as well as it does is never its narrative.

Instead, Dillard’s film aims to the skies to provide some breathtaking imagery that is impressive even on a smaller screen. Fortunately, I saw it on one of the biggest screens possible and it was nothing short of astounding. It takes some time before Devotion goes from practice flights to dogfights, but even at its most calm it’s still incredibly energizing. Unfortunately, the intensity of the aerial combat rarely meshes with the emotions on the ground, leaving it to feel like two separate pieces.

Eventually, it does come together but the power of that is more in the chemistry between Majors and Powell’s performances and characters. Most time spent with Jesse is spent with Tom, and they very rarely have moments divorced from each other. Powell’s impressed before with his ability to mesh with an ensemble such as Everybody Wants Some!! and Top Gun: Maverick but it’s here that he demonstrates his charisma and star power. Their characters both exude leadership qualities in the same dosage that the two actors compel an audience’s attention with an endearing but strong presence.

It’s unfortunate that Devotion isn’t always capable of marrying its aviation with the strife on the ground because its two lead performances and the beauty of every frame in the sky end up being the only elevating material present. Dillard’s film falls into too many standard biopic traps and never quite hits the emotions needed because of that. Instead, it’s a serviceable screenplay in a sturdy film that never quite breaks through the clouds.

How to Blow Up a Pipeline is an Incendiary Heist Film