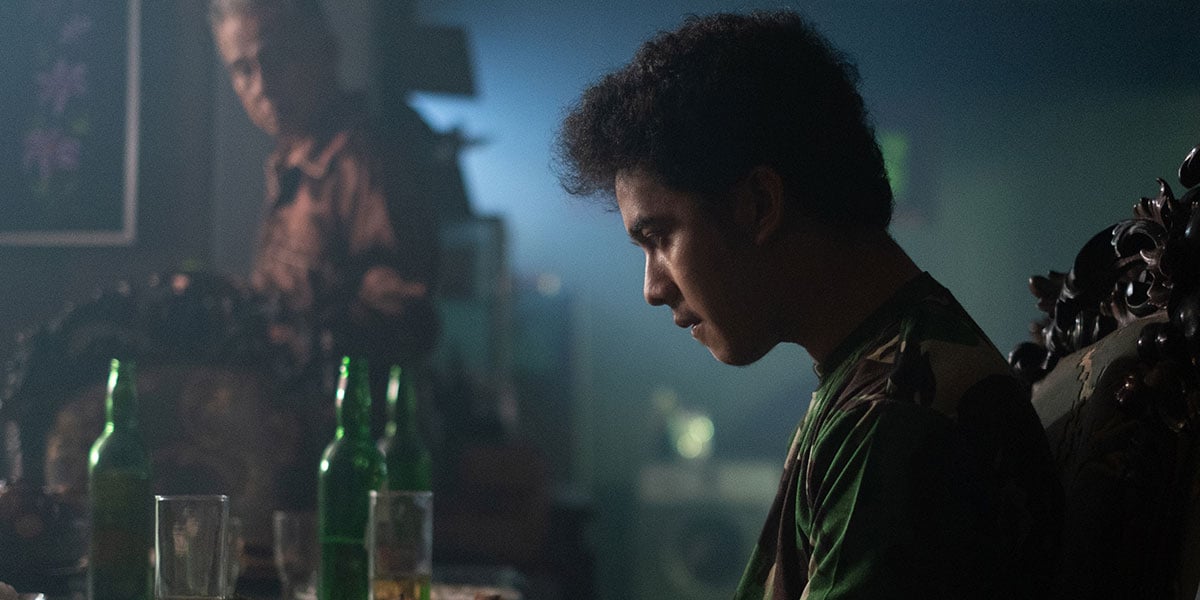 A nation being groomed towards power due to military influence over its youth, Autobiography illustrates a persistent corruption within Indonesia. As its protagonist slowly succumbs to the desire for approval from a powerful figure, Makbul Mubarak’s film takes a nation’s trauma and represents it through a young man desperate to find purpose and direction in life. A feature debut that refuses to shy away from the painful choices we make in our lives and the environments that allow them to happen, Autobiography delivers a searing indictment of a nation forcing its youth into a world of violence and darkness.

Rakib’s (Kevin Ardilova) life is a quiet, peaceful one without much direction before the owner of the abandoned house he resides in turns back up. A dilapidated mansion in rural Indonesia becomes Purna’s (Arswendy Bening Swara) base of operations as he returns home to launch a mayoral campaign for local government. A retired military General who seeks to have a new power plant built upon land owned by many residents of the area, his push for power brings along Rakib by his side and the two begin a mentorship.

It’s in the way everyone around Rakib comments on his similarities to the former General that lunges him into following in Purna’s footsteps. Beginning as his assistant, his assignments – mostly in relation to vandalism and dissent towards Purna’s campaign – eventually culminate in a single test of loyalty that puts Rakib’s blind faith in the man into question. As the title suggests, Autobiography weaves a narrative that feels more akin to self-reflection and a recognition of a broken system that allows violence and corruption to repeat itself.

Purna’s relationship isn’t just forced upon Rakib. His imprisoned father left a void that Purna is eager to fill. His purpose gives Rakib purpose and takes the young man from frequenting the local bar to being on his way to being one of the most influential people in his community. The case of how much guidance and counseling can push the impressionable is exemplified in the way that Purna is able to manipulate Rakib both through his vast network of connections and an understanding of what drives the young man.

Autobiography’s greatest strength lies in Ardilova’s subdued performance as he slowly begins taking on parts of Purna’s personality. Young and aimless, Ardilova’s quiet presence speaks volumes to what a lack of power can do to someone frequently residing on the fringes of society. Once his character begins taking on more responsibility, Ardilova’s performance morphs into something foreboding as his character wears the cautionary tale that Mubarak is weaving on its sleeve.

There’s a pervasive darkness that slowly creeps into every frame of Autobiography and Mubarak capitalizes on that to staggering effect. It’s almost hypnotic to watch Rakib’s transformation seemingly occur due to a singular force exerting pressure on him. Where the film leaves Rakib is as fine a point as can be put on the screenplay where Mubarak fully encapsulates the rise of corruption and criminal behavior in Indonesia’s youth. With very little room to breathe in between, Autobiography concludes only to leave a remarkably sorrowful impression upon the audience and a foreboding dread for Indonesia’s future.

How to Blow Up a Pipeline is an Incendiary Heist Film

HUNT is a Stylish and Empty Espionage Thriller