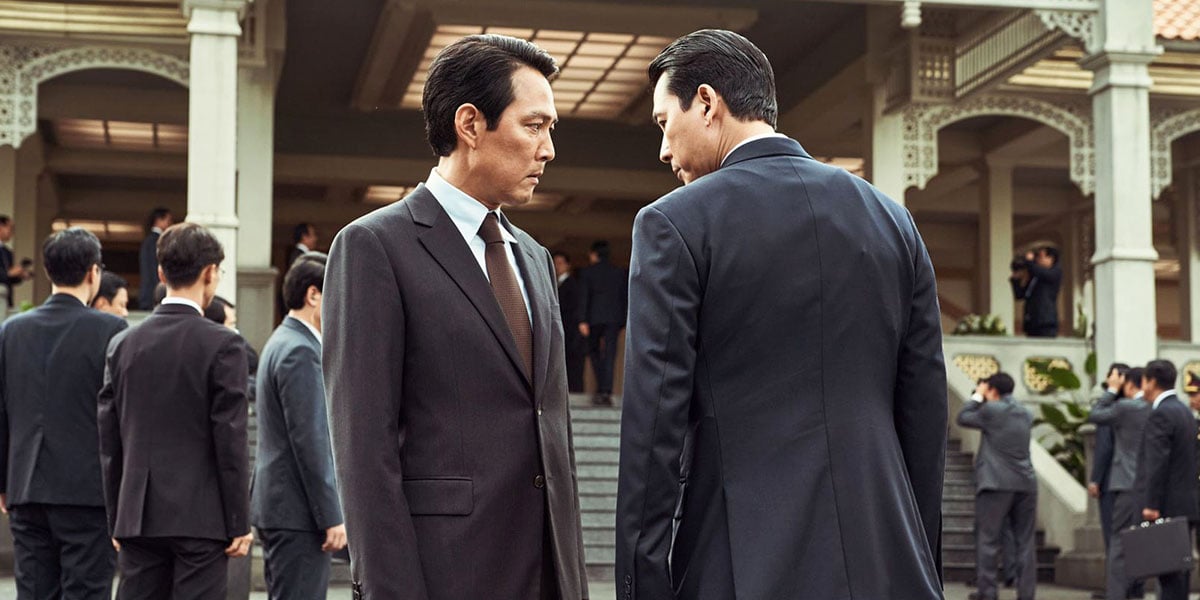 There are very few moments in Lee Jung-jae’s directorial debut, HUNT, where anything feels certain. It’s by design as Lee reflects the tensions between North and South Korea in the 1980s through a thriller rife with every spy movie cliché ever written. With a screenplay co-written by Jo Seung-hee, the most vital component of Lee’s film – an understanding of characters and motivations – is absent and replaced with explosive action and visceral violence that punctuates the volatile relationship between two nations. Even as it features some great performances from its two lead actors, HUNT never finds the time to settle down and establish what is happening resulting in a film that is exhilarating in the moment but always at an arm’s length from the viewer.

South Korea’s President becomes the target of a very public assassination attempt by an unknown party. With the relationship between North and South Korea already fragile, KCIA’s Foreign Unit chief Park (Lee Jung-jae) and the head of the Domestic Unit, Kim (Jung Woo-sung), are both tasked with finding out who is behind the assassination plot. With a past relationship that left Park with severe nerve damage, it doesn’t take long for the two to be at each other’s throats. This is only amplified once it’s discovered that a mole within the agency is responsible for leaking information to North Korea and suspicions arise as both Park and Kim suspect one another of being the mole.

Kim’s character is ultimately given very little attention outside of his department’s attempts to solve the case, which is part of the reason why HUNT never feels as emotionally gripping as it possibly could have been. There are very few motivations given to Park and Kim’s characters, despite there being a subplot with Park involving a teenage girl that he acts as a guardian angel that eventually weaves itself within the main story. Both characters are never given much backstory and the question of who is a North Korean spy feels more like a rhetorical one than something for the audience to figure out along with the film. It’s not clues that the audience is looking for, it’s information on both the characters – something which Lee and Jo’s screenplay decidedly omits.

Instead, Lee’s film uses uncertainty as a brush to paint each scene and turns every action beat into a mess of tension in the unknown. No characters’ motivations are clear and the narrative reveals details at as steady of a pace as it unloads bullets, resulting in a cavalcade of gunfire and information that is surprisingly not that difficult to discern at the moment. It’s a testament to the screenplay that despite it never having any emotional pull, it’s still an intriguing premise that when paid attention to isn’t as confusing as its double crosses and unknown character traits may suggest.

In addition, HUNT features some tremendous action set pieces that go a long way to keeping the adrenaline flowing. Every scene has several moving pieces and the camerawork handled by the always electrifying Lee Mo-gae (I Saw the Devil, The Good, The Bad, The Weird) manages to keep everything in focus so attention doesn’t divert to another part of the action. Aided by Park Chan-wook’s regular editor Kim Sang-beom, Lee very clearly has every facet of HUNT in capable hands resulting in a stylish thriller that is marred by rarely letting the audience feel like they’re in the fold.

Lee’s feature directorial debut is a juggling act that somehow is fairly straightforward and yet suddenly becomes derailed by the final act where the action is stimulating but the entire narrative falls flat. Reveals start pouring in even more suddenly as the plot twists and turns and the final action set piece takes on the burden of disseminating information and also putting the finishing touches on its espionage antics. It doesn’t come together that neatly though and HUNT concludes with a whimper as everything missing from character development to concise storytelling compounds into a baffling mess that upends any confidence one could have in understanding just what actually happened.

Autobiography is a Haunting Study of Violence in Indonesia

A Man of Reason Retreads Every Revenge Film Cliché