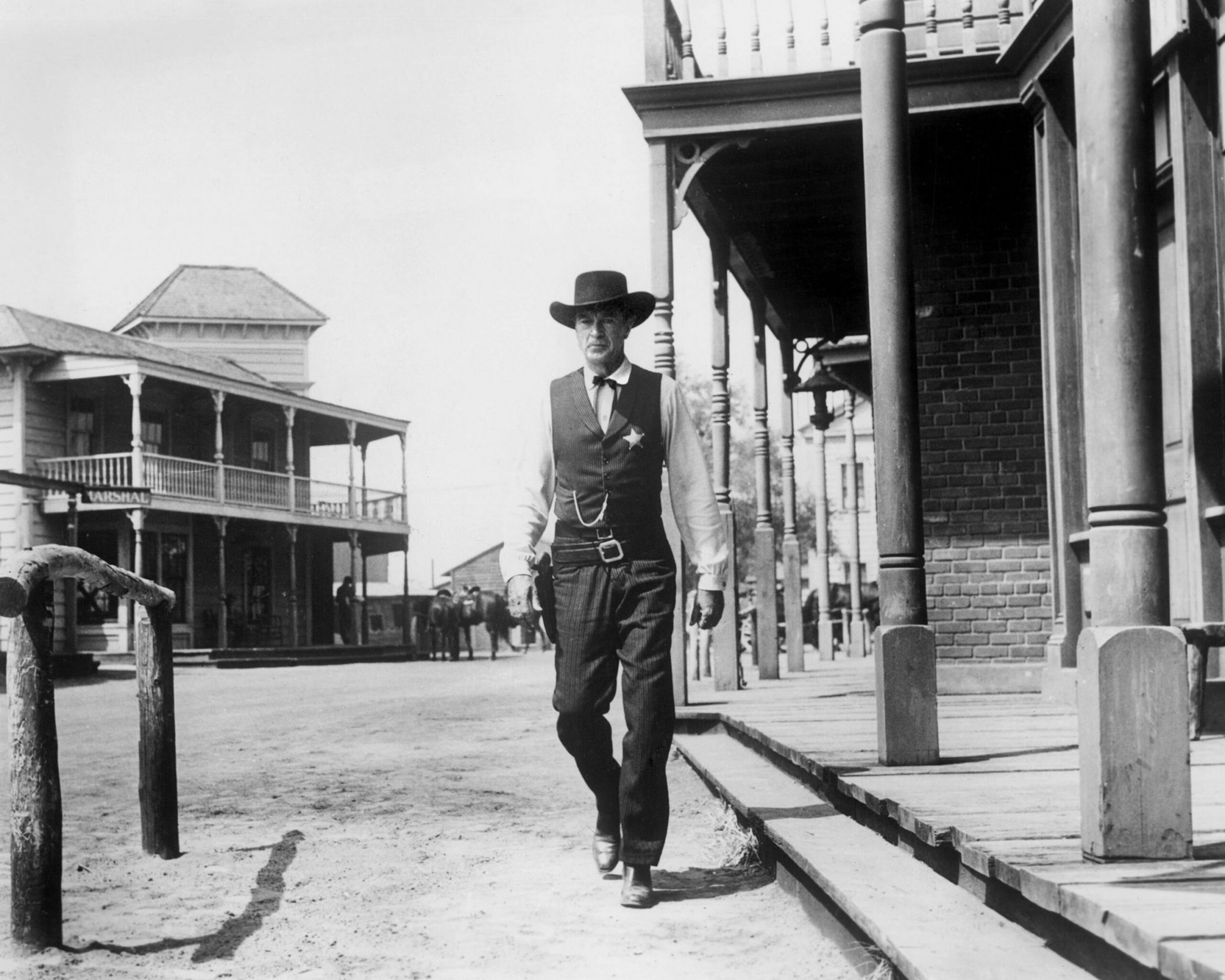 For any film purporting to have dramatic heft, time is typically of the essence. The protagonist and their friends must accomplish such and such task before such and such time otherwise doom and gloom. It’s a narrative device as old as time itself, and, when utilized with deft, rarely fails. For some movies, the concept of time carries a greater meaning. Tenet, from Christopher Nolan, is all about time ticking away, both forwards and backwards. In other examples, the temporal anchoring bleeds into the fabric of virtually everything that makes up the story. Fred Zinneman’s High Noon, which turns 70, is one such case. Time, clocks, and period setting inform the viewer about everything there is to know.

Succinctly, the plot follows a harrowing hour and change for retiree Marshal Will Kane (Gary Cooper). Newly wed to pacifist Quaker Amy Fowler (Grace Kelly), he is just about to leave Hadleyville for his honeymoon when word travels that former foe Frank Miller (Ian MacDonald) is on the noon train. Frank was sent to hang by Kane but the former has since been pardoned. No need to put two and two together to understand that the villain and his boys are gathering at Hadleyville for revenge. It’s almost 11 am, meaning Kane has precious little time to deputize marshals and protect the town. That task proves far more challenging than he could have ever predicted.

Why is this happening NOW?!?

Of all the gosh darned days when the dastardly Frank Miller chooses to arrive back in town and cause havoc with his gang (among them a young Lee Van Cleef), it had to be Will Kane’s wedding day. Compounding the issue is that on this beautiful day of nuptials Kane is hanging up badge for good. His law enforcement days are behind him and he has found himself a lovely wife (it’s Grace Kelly, so she’s heavenly in her loveliness).

He is looking a little worse for wear. A lot of that has to do with the fact that Gary Cooper plays the part. He was only 51 years old at the time, which in of itself is nothing notable. But health consciousness was not the same back then, so 51 meant something. He’s also mostly likely been shot at a few times, and that kind of stress is an efficient aging factor. Be that as it may, the point is that Kane looks as though he has merited a relaxing new chapter in his life. The time has come to leave the badge behind.

One more element is added to make the timing of the antagonist’s return even more distressing. The new Marshal of Hadleyville arrives tomorrow. Not today, but tomorrow. Kane knows that if he and Amy leave, Frank Miller will eventually track them down, but not before turning the town upside down.

Just when he wants to get out, they suck him back in.

How Much Time Do I Have?

As the film starts, it’s right around quarter to eleven in the morning.  The wedding ring has barely graced Amy’s finger when the news comes (during the celebration no less) that Frank Miller is going to be in town. He’s on the train scheduled to arrive at noon. These days the town is a bit light on policemen, except for Harvey Pell (Lloyd Bridges).

However, there’s one lingering issue. Harvey’s ambition was to become the next Town Marshal. For undisclosed reasons, he will not be. Worse, he suspects that the powers that be were discouraged to nominate him at least in part due to Kane’s council. Whether entirely accurate or not, the fact that the hero does not outright deny the accusation says something. Frustrated and afflicted by an unspoken inferiority complex, Pell storms off.

Given how things stand, Kane does not have much time to collect a posse of his own. He doesn’t help himself either by riding off temporarily with Amy before his conscious begs him to return. Precious minutes have already elapsed.

Kane’s meandering visits around town for assistance do not bear fruit. Much to his dismay, virtually no one is willing to lend a hand, possibly their lives, for the cause. The Ramirez Saloon sounds like a decent place to find some hopeful gunslingers. Whether they’d be in a state or not is another matter altogether. As the barman boasts, plenty of folk in the room was tossed in the slammer by Kane. They sure ain’t gonna help him out now! Pell is present, getting as drunk as a skunk. As for the rest, there are no takers. The cause isn’t worth the risk.

No better luck at Church. Kane’s interruption of service is made even more embarrassing by the fact that because Amy is a Quaker, they forsook church as the location for their ceremony. The protagonist wouldn’t receive the warmest of welcomes at church on a good day. But desperate times call for desperate measures. The worshippers erupt in a debate.

How can they let the town go to heck at the hands of Frank Miller’s gang?!?

This isn’t their problem. The politicians are paid to make sure that towns have the required tools to protect themselves. Let them sort this out!

If they don’t do anything, northern folk won’t give Hadleyville the time of day. It’ll be just another wide-open town.

Finally, the mayor chimes in, arguing, politely, that the least worrisome scenario would be if Kane wasn’t present when Miller and company arrive. It’s him they’re after. Despondent, the Marshal leaves.

Even his former boss (Lon Chaney Jr.) refuses to join. He’s too old and his hands aren’t nearly what they used to be.

As the clock keeps ticking, all the old wounds, frustrations, and rivalries explode. Even the hero’s former flame Helen Ramirez (of the saloon fame, played by Katy Jurado) is dragged into it since she is currently Pell’s belle. As a proud Mexican-American, she would stay and fight alongside her man, only Kane isn’t her man anymore and Pell won’t fight.

Everything was fine barely an hour ago!

Another detail makes up the greatness of High Noon. Something unsuspecting viewers may not notice at first. Not that the film doesn’t play well if they don’t, but it adds an extra special quality to the film.

Zinneman and editors Elmo Williams and Harry W. Gerstad pace the story so that it plays out in real-time. It runs 85 minutes, in other words, 1 hour and 25 minutes. The villains reconvene at the train station and head to town for the climactic gunfight with about 10 minutes left. When Kane is informed that Frank Miller is heading, he glances up at the clock and sees that it’s 10:40. It isn’t perfect real-time, but close enough to heighten the tension.

Considering all the drama explained above in the previous sections, the framing device works wonders. Images of clocks abound. Whether intentional or not, Zinneman even has the camera capture a watch repair shop sign in the background at one point. Characters look up to take note of how much time is left until high noon.. None more so than Kane himself, who eventually realizes that he will most likely have to face off the villains by himself. There simply isn’t enough time.

Stand the Test of Time

This article could go on and on about the crucial role time plays in High Noon. It’s in the title, after all. The lackies who await Frank keep asking the station manager if the train is still expected for noon. The story of revenge and potential violence takes place on a Sunday, a church day. Despite there being plenty of drunkards at the saloon, it’s still only the morning. A reference to “northern folk” alludes to the north-south divide that still defines the United States. In the Marshal’s office, there is a small news poster with the title President Declares War in reference to the Civil War (the story is set in 1870).

While it is simple to argue that the notion of time is important to any movie, Zinneman explores it in creative ways with High Noon. It adds depth, and emotional layers to the story, informs its thematic resonance, and serves as a ticking clock device for tension.

For newcomers, it’s well worth their time.

La Bamba at 35: Ritchie Valens, Before the Day the Music Died