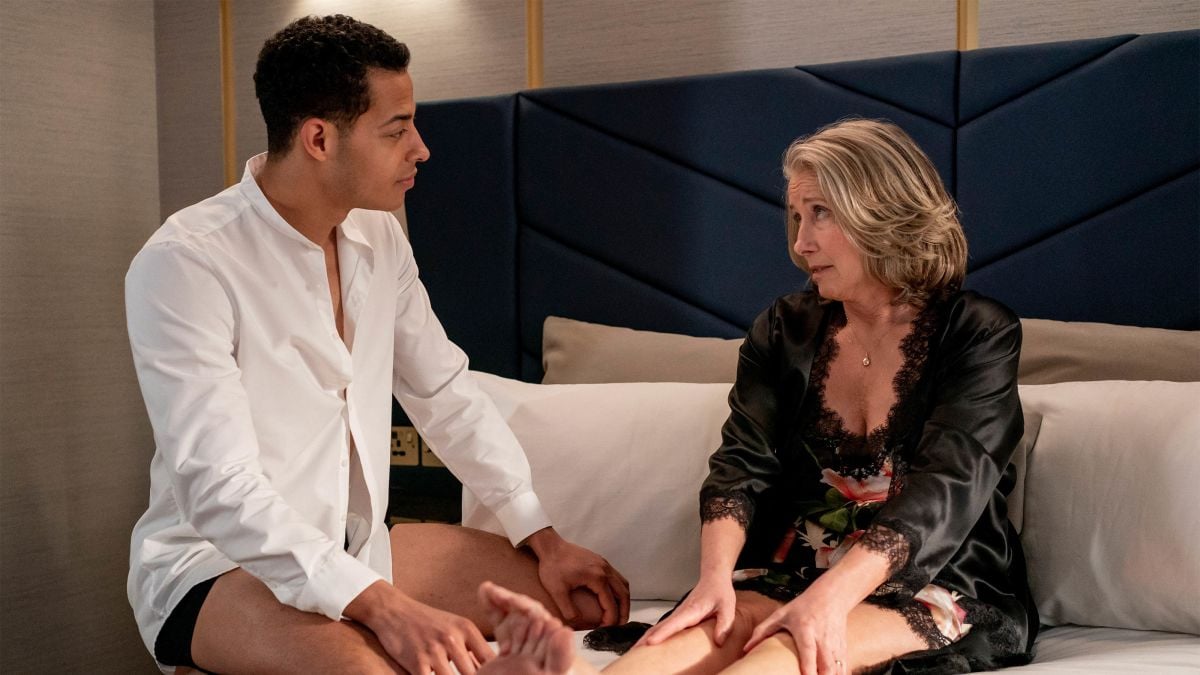 The story of Nancy Stokes (Emma Thompson) in Good Luck to You, Leo Grande is less one of an older woman discovering sexual satisfaction for the first time, and more a tale of a woman who missed out on the living part of the last few decades of her life. She directly relates this failure to her now-dead husband and frustrating children; it’s something she hopes a sex worker can correct for her.

Watching Good Luck to You, Leo Grande truly feels precious —how rare to have a nuanced, practical, realistic conversation about desire and all its implications between two people who genuinely have all the (appointment-allotted) time in the world to get to know each other. There’s a profound patience in sex worker Leo Grande (Daryl McCormack), a deep interest within Nancy, and a quiet in the room that makes it feel like the possibilities are endless.

Though the film is shot predominantly in one hotel room, not once does it feel stifling or stagnant. The meditative energy of Leo Grande is carried through with soothing soundtracks (when there’s music at all) and soft natural light streaming through the hotel’s windows. The film’s sound design is remarkable: alternating seamlessly between the silence of the room allowing Leo and Nancy’s emotions to lead the way, and perfectly curated songs that conduct the mood between the couple.

Nancy and Leo talk on screen significantly more than we see them having any kind of sex; In fact, most of the sex happens off-screen. Leo is more than happy to offer open conversation with all the charm and patience that he puts into his more physical services. Throughout the film, Leo presents sex work as his vocation; A service delivered thoughtfully, with expertise, insight, and mutual respect; He sees Nancy through a lens of compassion. When Nancy comes to Leo Grande with a list of desires, he gives her so much more; It’s not the elusive orgasm she’s never experienced, but it is a monumental perspective shift.

When Nancy meets Leo, she’s already done the work of recognizing a need, researching the solution, and reconsidering what pleasure feels like to her; She’s already more than halfway there. But through Leo, she recognizes sex work as something beautiful, and an essential service —they even banter about the government offering it, and how that would affect taxpayer rates. Nancy learns that the world would be a better place if more people like Leo were allowed to do their job freely and safely.

Thompson’s performance of Nancy is everything you’d anticipate: Intriguing, endearing, entirely impressive. There’s an exciting bonus for viewers who appreciate seeing a white woman represented as the anti-hero –the way it is for many of us in real life– in how vividly Good Luck to You, Leo Grande observes the many sides of Nancy: We see sharp edges in how she recounts her past; the careless humor that shows her grimy interior; We notice how she can’t rub off the snob within no matter how kind she’s trying to be.

Daryl McCormack is magnificent as Leo Grande. He embodies tenderness, radiates compassion, the seduction in his languid movements is captivating without being overpowering; The way he so easily drops the curtain to reveal his vulnerabilities the second Nancy leaves the room is simply mesmerizing. Director Sophie Hyde creates so much space for a fair balance (of power, perspective, and screen-time) between the characters —from the very first frame, in fact, from the opening lines: It’s Leo we see first; It’s him we hear humming to himself before we see or hear anyone else.

Putting Leo’s name in the title at first seems like a clever marketing tactic, but he is the core of the film. Nancy goes on an important journey –one that smoothly escapes the “exotic person of color shows you how to be a better person” trope by the sheer brilliance of centering Leo’s autonomy and genuine passion for the work at its heart. We learn that, regardless of what she may believe, the longevity of Nancy’s displeasure comes down to her own crippling prejudice, puritanical rigidity, and fear of anything different. Leo is the hero (and at times the victim). More than anything, this is a showcase of Leo Grande: the man, the sex worker, the son who gives more love out into the world than he ever received.

Despite their age difference and the inherent relationship dynamic, by the distilled magic of this film-making team, we only see the emotional balance topple when Nancy betrays him; When we realize they’ve revealed too much and suddenly the words she’s said about her children feel like blows against him. Through Leo, moments that were amusing earlier in the film feel cruel by the end: Nancy feeling free to confess for the first time that she finds her son utterly boring, for one, initially feels like a blessing –to see a woman so honest an open about motherhood– but eventually feels painful when reflected against the carelessness with which Leo’s own mother felt comfortable to admit and exploit her disappointment in him.

That scene is astonishing, not because they are in the same situation, but because Nancy suddenly reveals herself as a disgrace, as a symbol of everything Leo represents moving past. It’s quite brilliant, how delicately the script, and of course the breath-taking performances, allow the two characters to dance. —Sometimes even literally: Leo and Nancy dancing in the hotel room become something unforgettable in the way Hyde shoots it; in the way Scriptwriter Katy Brand interrupts it; in the way the actors contort their bodies to undo any relaxation they found in the middle of the scene.

But the pace of the film is both surprisingly peaceful, subtly humorous, and strangely off-kilter. It’s the first film I’ve watched in a while where I didn’t dare even nudge the remote and accidentally display how far into the film I was. Good Luck to You, Leo Grande is spellbinding; You’re so absorbed in their conversation that you can’t imagine how it’s going to go, or where it’s going to end, and at the same time you desperately don’t want it to.

Until a montage that feels a bit like a second thought thrown in for good measure at the end, most of the sex happens off-screen, but Leo Grande does not shy away from intimacy. Through Hyde’s eyes, the couple’s frequent requests for consent at various stages of touching feel alluring; the act of obtaining consent here is both simple and satisfying, sexy and necessary, as it should be in real life.

This film is a precious thing, not simply for the tenderness and vulnerability it allows two people of whom there are millions walking around every day —dissatisfied middle-aged woman; sex workers wise beyond their years and even kinder— but for the generosity with which Leo and Nancy reveal themselves to us even before we see much of their naked skin at all.