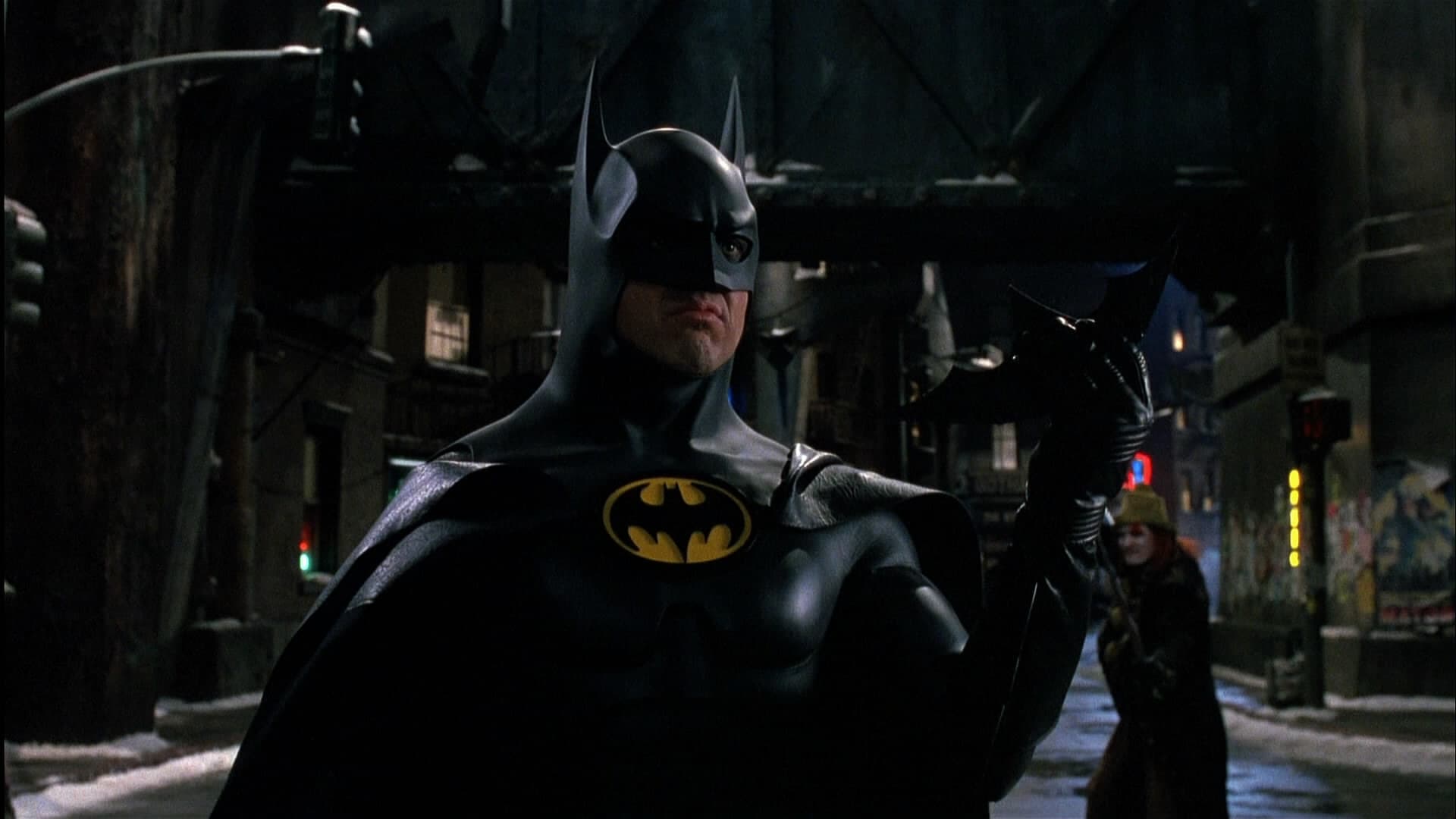 I always thought of Batman Returns as the “dark” movie of the first run of Batman films. Director Tim Burton’s follow-up to what’s now always called Batman ’89. Burton’s second Gotham film had Michael Keaton returning in a second go-around, facing off against a trio of villains the most memorable of which was Danny DeVito’s Penguin. DeVito, beneath a heroic amount of makeup and prosthetics, played the famed villain as a tragic figure, out for revenge against Gotham, Batman, his parents, and the world at large.

For the third and fourth in that series of Batman movies, Burton (and Keaton) were jettisoned, in favor of director Joel Schumacher and Val Kilmer (and later George Clooney) as Batman, in movies that were much more colorful (and, in the eyes of most, less creatively successful.)

But compared to takes on Batman brought out in the subsequent years by the likes of Christopher Nolan, Zack Snyder, and Matt Reeves, Burton’s version was practically sunshine and comedy.

Batman Returns arrived on June 19, 1992, 30 years ago this week. After Bruce Wayne and Batman did battle with The Joker in the first movie, there were three heavies in Batman Returns: The Penguin, The Catwoman (Michelle Pfeiffer), and an evil businessman Max Shreck (Christopher Walken.) Shreck was a character without a comics pedigree, but he shared a name with the actor from the silent horror film Nosferatu; a movie about a decade later, Shadow of the Vampire, would posit that Schrek the actor was a vampire himself.

The plot of Batman Returns is somewhat convoluted, with the villains engaged in temporary alliances with one another, while Catwoman is out for revenge against Catwoman, his former secretary who pushed her out of a building before cats literally licked her back to life.

But what makes the film really go is DeVito as Penguin, a tragic villain who is given more depth than superhero movies typically gave their bad guys at the time. Danny Elfman’s score, while similar to that of Batman ’89, was another of the movie’s big successes.

In the sort of thinkpiece that prefigured the discourse of decades later, the New York Times ran an op-ed shortly after the film’s release called “Batman and the Jewish Question.” In it, authors Rebecca Roiphe and Daniel Cooper found hints of anti-Semitism.

Penguin, the authors argued, “is not just a deformed man, half human, half-Arctic-beast. He is a Jew, down to his hooked nose, pale face, and lust for herring.” They also noted that Shreck, a man with the same name as that famous screen vampire, was also coded as Jewish, while the film was loaded with Old Testament references, from Baby Oswald being put in a carriage like Moses, and the attempted slaying of the firstborn. The piece even compared Elfman’s music for the film with that of Hitler’s favorite composer, Wagner.

While arguing that they didn’t believe the movie was itself anti-Semitic, the authors argued that the film “repeatedly uses imagery and cultural stereotypes that are rooted in Judeo-Christian culture.”

Anti-Semitic allegory or not, Batman Returns was a big hit, earning $162.9 million domestically and another $100 million overseas. But it wasn’t a big enough hit for Burton to keep the reigns of the franchise. The superhero movie revolution that followed has gone by without a contribution from Tim Burton, although he infamously nearly directed the never-made Superman Lives in the late 1990s.

It’s not as good a film as Batman ’89, but Batman Returns was the more Tim Burton of the two. And it was also clearly superior to the two Joel Schumacher-directed versions that followed.

Minority Report at 20: When a Vision Becomes Reality

Good Luck to You, Leo Grande is a Precious Meditation on Sex Work, Motherhood, and Desire