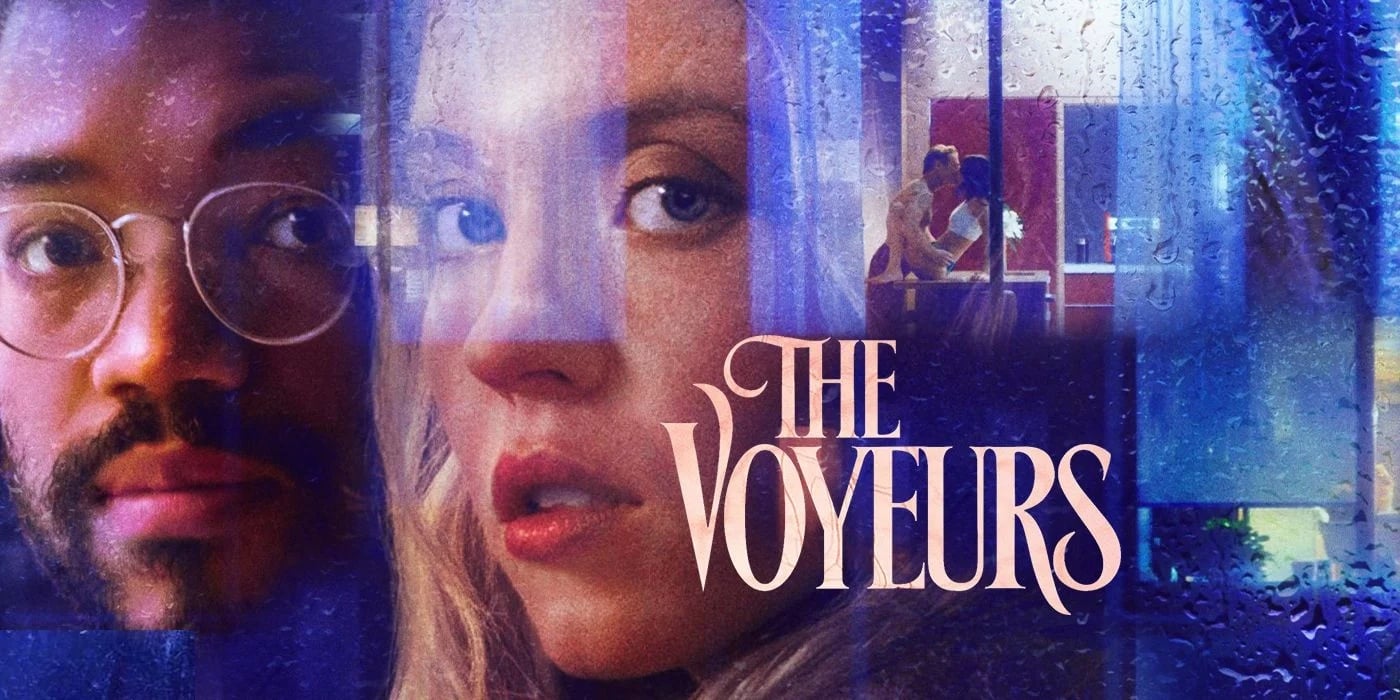 Sydney Sweeney (Euphoria, The White Lotus) and Justice Smith (Genera+ion) are the sweet and surprisingly resourceful couple at the heart of The Voyeurs. We meet them as they’re moving into a Montreal apartment where they discover they can spy on their neighbors’ (Ben Hardy and Natasha Liu Bordizzo) various sexual encounters.

Smith is charming as Thomas, a musician who’s had his adventurous youth and wants stability with Pippa, who Sweeney plays with a genuine air of innocence, much less affected than we’ve seen her in the popular TV roles she’s known for. Pippa has been focused on medical school, now steady in a job as an ophthalmologist; She wants to get a little wild before they settle down and have kids. This storyline allows the playful aspects of exploring voyeurism as a couple to turn obsessive and increasingly illicit, threatening to tear the young lovers apart.

The first half of the film is as sensual, sexual, and enthralling as you’d expect —though sprinkled with startlingly saccharine moments of banter and giggles between the leads. This endearing quality between the two actors, combined with their sweet, innocent dialogue, ensures that we know how wholesome the pair is at the start. The escalating implications of Pippa and Thomas’ actions question the rights and responsibilities behind the privacy we owe our neighbors, asking when –and at what cost– it’s acceptable to cross those lines.

The Voyeurs is a stunning portrait of desire in the case of two young couples in love and vaguely unsatisfied in their respective careers. The duo they’re watching has a lot going on: Arguments about infidelity, sex-filled photoshoots, near-death experiences, and costume parties. Ben Hardy’s portrayal of the exhibitionist husband’s manipulative behavior cleverly explores the dark reality of power dynamics and blurred lines of consent between photographers and their models. It’s also worth warning that there is suicide in this film, though both cases end up being not at all what they seem.

While indulgent in scenes that build sexual tension and generous with its explicit sex, the film as a whole is fast-paced. Pippa and Thomas notice the couple in the window within the first six minutes, and things pick up immediately from there. The twists –and there are several– follow no familiar rhythm or tone: First, they’re intriguing, then exhilarating, then charged with moral ambiguity; Later in the film, coming in closer succession than before, we’re hit with a series of reveals that are devasting, sickening, redemptive, and ultimately harrowing.

Michael Mohan, writer and director of The Voyeurs, has taken a beautiful and brilliant somewhat-novelistic approach to the themes in this film. To expand on this would give things away, but the way he’s mined the concepts of exhibitionism and vision –going as far as to explore the various settings and uses for the words themselves– greatly enriches the film, allowing enjoyable elements of crime-thriller calculations to come into play.

The use of the song from the film’s opening– ‘Eyes Without a Face’ by Angel Olsen– repeated in the final scene gives the twisted story a warped carousel sensibility, highlighting the way things have changed since the events at the start. The fact that many of the soundtrack’s lyrics and titles —‘I Can Only Stare’, ‘Secret in the Dark’, ‘Desire’, ‘In Your Eyes’—align with the film’s themes is worth appreciating, too.

Mohan is playful with his artistic close-up shots –dialing up the sexy, then the terrifying; successfully turning ophthalmology into something both seductive and vicious. The editing (by Christian Masini) is sharp and surprising, almost music-video-esque, enhancing sexually charged scenes and serving dramatic shifts in mood: Laser surgery on an eyeball cuts to a soft-boiled egg swiftly sliced in half; Pippa turning dials during an eye examination switches to a close-up on her lips as she shifts her body closer to the woman she’s been spying on.

The storytelling is selective and specific. Mohan takes us along for a wild ride, only giving us enough to maintain the allure and ensure shock value. It’s a sleek and fun cinematic operation. Elisha Christian’s cinematography creates a distinct atmospheric tension: Thomas and Pippa keep their apartment’s lights off to avoid being caught staring through binoculars; golden light from lampshades pierces through the shadowy corners of their home. Pippa’s workplace is all blue-greys, sharp angles, city views and technical equipment. The film’s overall warm neon, cosmopolitan feel suits the simple locations and matching autumnal wardrobes.

Pippa’s whole look –textured knitwear, stylish coats, gently tousled hair— is somehow reminiscent of Selena Gomez’s Only Murders in the Building character, but there is no big mystery behind this young woman’s behavior. Here, the aesthetic is used to convey how wide-eyed Pippa is caught off-guard yet confidently led by her curiosity at critical points.

There is one disappointing moment where the film feels as though it has abandoned both its leads of colour for a storyline focused around the two white characters. In actuality, The Voyeurs has constructed it as a breaking point for multiple daring twists, offering fresh perspective on everything, those characters of colour in particular. Viewers will be hooked right up until the very end –which is not at all when you expect. As the film progresses, so too do the plot twists; Just when your heart rate settles, something even more unexpected happens.

Though exclusively available on Amazon’s streaming platform for home viewing –a preference for many– the film’s sudden emotional twists inspire a nostalgia for the in-cinema experience. It’s perfectly tailored to coax suspicious murmurs from a theater audience; the heightened drama designed to elicit a shocked gasp from someone sitting a few rows ahead of you. As The Voyeurs’ credits start to roll, the feeling is easy to imagine: Walking the carpeted hallway in a daze, suddenly thrust into a world of bright light and oblivious popcorn-eaters wandering around, the distant hum of “You have no idea what we have just been through” radiating from everyone leaving the cinema alongside you.

The Voyeurs is a spectacular viewing experience –for its questionable morals steeped in seduction and eroticism, but most remarkably for the unexpected chaos of ‘The Voyeurs’ as a social experiment: Four people in love and lust, in various stages of control as their lives unravel.

After watching this film, audiences won’t view cooking eggs or visiting the optometrist in the same way. They’ll think differently when using wireless printers, filling up their bird feeders, and picking up a laser pointer. And they’ll definitely want to ensure their apartment has curtains!

Live and Let Die is One of the Lesser Bond Films

TIFF 2021: After Blue (Dirty Paradise) is an Acid Trip Worth Taking