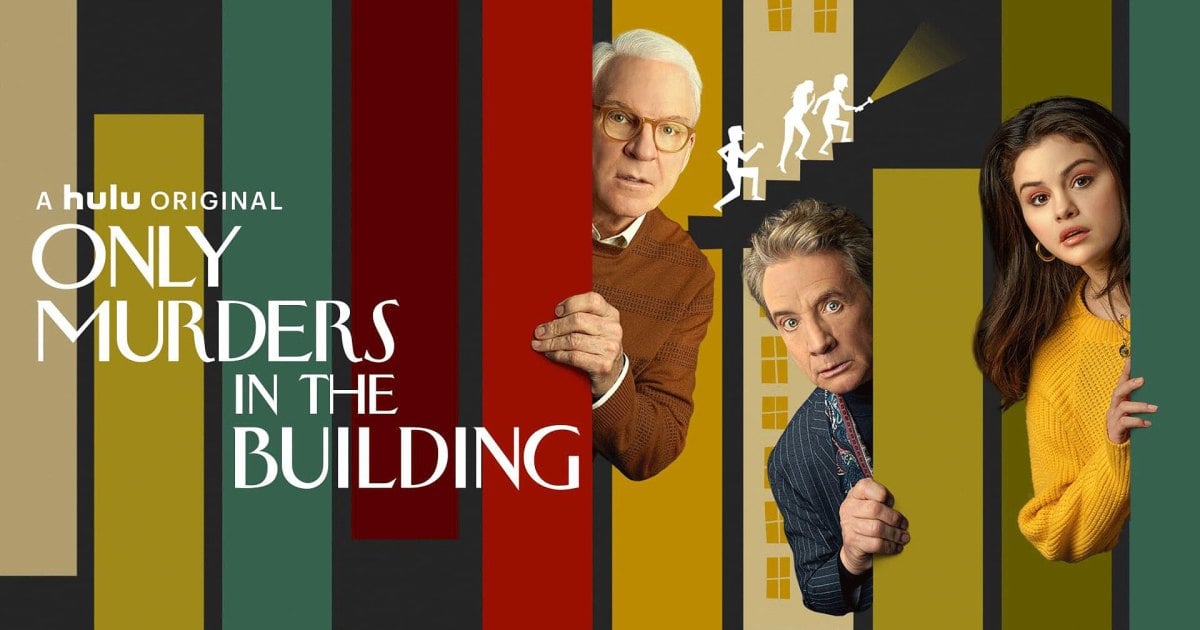 Only Murders in the Building is a persuasive and thoroughly enjoyable comedy that works as a murder mystery, true crime adventure, and a spotlight on loneliness in contemporary society.

Already compelling in its focus on three conspicuous characters living in a wealthy neighbourhood as they solve what they believe is a murder, the show goes on to layer comedic scenes with intriguing flashbacks and charming, introspective vignettes that make full use of its cast. It is now Hulu’s most-watched comedy premiere of all time.

Set around a luxurious Upper West Side apartment building called the Arconia, where the protagonists live alongside a variety of irritable, opinionated characters—among them, inexplicably, “musical icon, Sting” (who guest stars on the show)— a man named Tim Kono is suddenly found dead. The police rule it a suicide, but three true-crime-obsessed residents are convinced otherwise, and band together to uncover the truth through a haphazard, chaotic investigation of their own.

Our protagonists are: Charles-Haden Savage (Steve Martin), a typical has-been actor whose claim to fame is playing a police detective on a popular TV show from the 90s. Only Murders uses its introduction of Charles as a vehicle for an ALS joke that sets up the show’s commitment to outrageous and unexpected beats of humour.

Oliver Putnam (Martin Short) is the most flamboyant Arconia resident, a struggling Broadway director at risk of losing his extravagant apartment and desperate for a new avenue of financial success. Mabel Mora (Selena Gomez) is perfectly apathetic for her age but keeping way too many secrets; Neither of her co-conspirators trusts Mabel because of her suspiciously “shifty” behavior. A shocking reveal in episode one informs the audience that she has an elaborate history with the murder victim. The following episodes raise more questions about a potential motive for his murder, linking back to events in Mabel’s past.

The show’s writing is a stellar combination of upbeat, assured podcast narration and dialogue that cuts through any notion that these people have their lives figured out. Each of the protagonists has lost something –a career, connection to their family, significant childhood friendship—and uses this investigation as a distraction, something to focus on while everything else seems to be falling apart. “Because let’s be honest,” Oliver tells the audience, “Sometimes it’s easier to figure out someone else’s secret than it is to deal with your own.”

But the places this search takes them –emotionally and logistically– seem to move their respective predicaments forward in surprising ways. As they break laws and cross boundaries to uncover a truth they are absolutely unprepared for, it becomes clear that none of the protagonists are in control of the ride they’re about to go on.

Only Murders is a love letter to living in New York City, by way of romanticizing the ennui of sharing an apartment building. It delivers subtext about the way we live beside our neighbors without considering the details of what we see —until something like this happens. Through relatable, entertaining scenes, it brings to forward the most frustrating and inconvenient moments of sharing a residence with strangers: Overhearing their phone calls, misdelivered packages, avoiding conversations in the elevator, and disobligingly cooperating with the building’s lifestyle regulations.

When Tim Kono dies, the building’s memorial service descends into collective relief upon realizing a very specific implication: “Does this mean we get to use our fireplaces again?” a resident asks. “Yeah, he was the guy with bad asthma, right?” another cuts in, “Since he’s dead, we should be able to use them now.” That same crowd hilariously erupts in sorrow upon hearing that a resident’s cat died the night Tim Kono did. “So, our victim was less likable than a dead cat,” Charles concludes.

The premise of Only Murders is a play on the contemporary amateur detective phenomenon —the way we all feel qualified to solve every murder ourselves, thanks to decades of crime shows on network TV and the tremendous uptake in popularity of true crime podcasts. The trio breaks into apartments, examining the victim’s trash and his unopened packages, interviewing their murder suspects with no real preparation.

Much of the show’s humour comes from the efforts to create a podcast from their new obsession —complete with ridiculously irrelevant sponsors, creatively ensuring verbal consent to record strangers, and Oliver directing podcast guests to enunciate more even while they’re crying. (It’s made delightfully meta when he is seen directing Steve Martin’s character to hit certain words harder, or when Mabel and Oliver question Charles-Haden Savage’s acting abilities.)

At one point, their strongest suspect is selected based on an audition skit that took place in Oliver’s imagination. Midway through interrogating that suspect, Charles is seen frantically waving around a dead cat he discovered in their neighbor’s freezer.

Overall, this is a sharp, stylized –dramatic jewel-toned coats; expansive, distinctly decorated apartments— and whimsical New York City adventure. Locations often look like a theatre set or a to-scale model, something we could pick up and play around with; turning the residents’ real lives into something movable and fun, which is essentially what the protagonists are doing with the murder in their building.

Playfully threading through interconnected mysteries, the Only Murders storyline simultaneously answers questions and reveals new secrets. As the show unravels, so does our trust in each of the main characters —all of them are unreliable narrators of their own lives and of the ongoing mystery they’re trying to solve together. This expands the fun of watching it; While we are adding up clues for Tim’s murder, we learn of all sorts of established facts that simply cannot be true.

With ten episodes in total, and three now available to stream, upcoming Only Murders in the Building episodes boast all kinds of theatrical antics making full use of its eccentric leads. (Guest stars include Tina Fey, Jane Lynch, and Broadway veteran Nathan Lane.) It’s perfect for true-crime podcast enthusiasts, fans of any of the central actors, lovers of stories set in New York, and anyone looking for a captivating, cozy mystery to escape into.

—What other show can claim an opening scene with a guilty-looking Selena Gomez leaning over a dead body as it bleeds out on the floor, where the final moment of its premiere episodes leaves you astounded but convinced that Sting is the lead murder suspect?

What If…? Episode 5 Struggles With Its Own Apocalypse