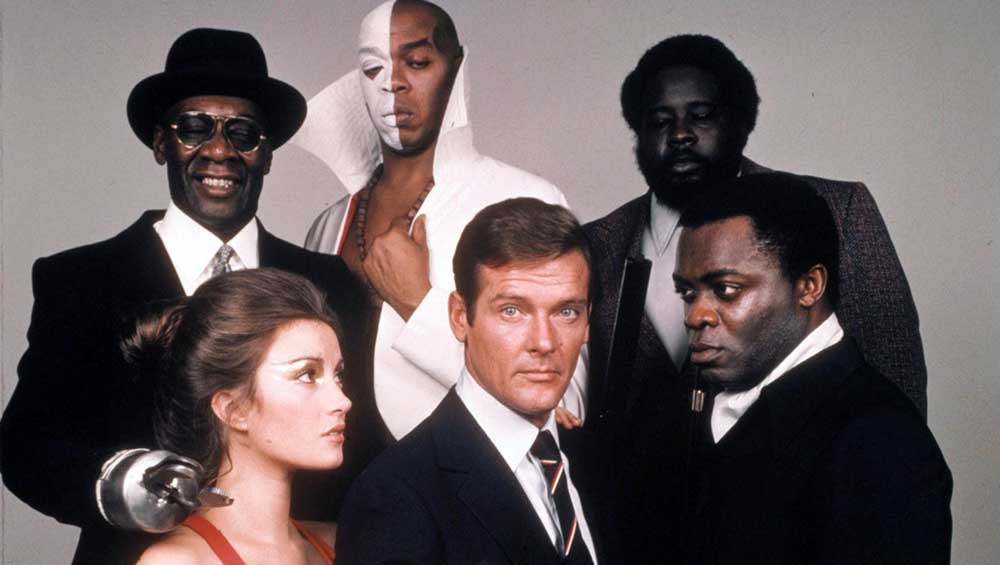 1973’s Live and Let Die unleashed a new kind of Bond upon the world, a Bond whose bland propriety and vacuous quips would dominate the screen for another twelve years. Roger Moore, taking over for Sean Connery, the third different Bond in three films, had enjoyed popular success as a television star on mystery series “The Saint.” He had originally tested for the role prior to inaugural series entry Dr. No, but was deemed “too pretty” by Bond producers Harry Salzman and Albert “Cubby” Broccoli. Sean Connery had only grudgingly agreed to return for 1971’s Diamonds Are Forever, and had no interest in continuing further due to tension with the producers. Salzman was not a fan of the choice of Moore, but was overruled by Broccoli, who saw in the TV star the opportunity to create an even more popular Bond than Connery. To this day, many Bond fans who first experienced 007 onscreen in the Moore era will stake the claim that he is the best Bond. Less often, however, is Live and Let Die considered one of Moore’s best outings, let alone one of the best Bond films. And with good reason.

Writer Tom Mankiewicz, who had co-written Diamonds with series scribe Richard Maibaum, was promoted to sole writing duty for an adaptation of the second Ian Fleming novel. Mankiewicz retained the voodoo elements and chief villain Mr. Big but tossed out the personal stakes for Bond, involving Felix Leiter and a tragic encounter with a shark. (Interestingly enough, David Hedison portrays Leiter in LALD  and would go on to reprise the role in 1989’s Licence To Kill, featuring as the inciting incident the very same shark encounter, replete with the infamous note HE DISAGREED WITH SOMETHING THAT ATE HIM. It’s too bad Hedison’s turn as Leiter in LALD is reduced to blandness akin to Leiter’s role in many of the Connery films). Mankiewicz does make clear, however, that Roger Moore as Bond will be quite different than Sean Connery as Bond.

The teaser sequence and Bond introduction in LALD is a useful means of exploring Roger Moore’s Bond persona on the whole. To date, apart from Moore, each new Bond (Dr. No has no teaser) has been introduced in the teaser sequence. In Live and Let Die, the teaser features the assassination of three British agents by various henchmen of Mr. Big in locales that will be important later in the film. Bond is nowhere to be found. He appears after the opening credits, in bed with Miss Caruso, an Italian Secret Service agent, at his home. That last aspect is very important, as this is the only time in the entire twenty-two film series to date (this writer has not yet seen Skyfall as of this writing) that the audience is invited into James Bond’s home, in England, and the only time to date that the new Bond is not introduced in action, in the field, serving his country. Bond is interrupted by the arrival of M and Moneypenny (LALD is the only pre-Craig film not to feature the character of Q), who have come to inform him of the aforementioned assassinations. Bond makes M espresso, they discuss what is to be done, Moneypenny makes a quip, and they leave. Miss Caruso, having hidden in the closet (though M & Moneypenny both guessed her presence), exits and attempts to leave, but Bond unzips the back of her dress with his magnetic watch, ready to leap back in bed rather than begin his mission to avenge the deaths of three comrades.

This is the Roger Moore Bond in a nutshell: a sophisticated British gentleman fond of the quick quip, terrible pun, and pungent espresso. He is not a Bond who gets his hands dirty. Any attempt by the producers and writers of the series to have “Connery scenes,” such as slapping women around to get answers, killing henchmen and baddies in cold blood, was shot down or argued vociferously by Moore. As a result, the realism of On Her Majesty’s Secret Service and From Russia With Love was tossed in favor of a return to the Goldfinger formula: larger-than-life villains, henchmen, take over the world plots, and women used for sex, not love. For example, Live and Let Die’s villain, Mr. Big, is actually a United Nations Ambassador named Dr. Kananga. The only attempt to differentiate these characters? Throw a bunch of rubber and latex on Yaphet Kotto’s face! Goldfinger had Oddjob? Mr. Big has Tee Hee, a smiling villain with an opposable pincer for a hand; Whisper, an obese thug whose voice is hoarse; and Baron Samedi, a voodoo occultist who may or may not be immortal.

But wait, there’s more! Racist Sheriff J.W. Pepper (Clifton James), who will reappear on vacation in The Man With The Golden Gun, shows up to call all of the black characters “boy” and be generally repugnant, while Gloria Hendry plays Rosie Carver, introduced as Bond’s San Monique contact and revealed to be a double agent working for Mr. Big, who is one of the most gratingly terrible Bond girls in series history, wearing out her welcome after only a brief ten minutes of screen time. And then there is Solitaire, played by Dr. Quinn, Medicine Woman herself, Jane Seymour. Solitaire is a legitimate psychic who has “the Sight,” but can only retain this power if she remains a virgin. Guess how long that lasts? Bond has her draw The Lovers card from her deck, and as he kisses her the deck is revealed to have been replaced by Bond, comprised entirely of Lovers cards. Bond takes Solitaire’s virginity, depriving her of her Sight and all use to Mr. Big, but what is gained? Yet another desperate, clingy would-be heroine who is pushed into a damsel in distress situations throughout the second half of the film and becomes an annoyance rather than an interesting character.

The film’s conclusion is especially lackluster. Mr. Big’s death by shark pellet, inflating like a balloon only to pop when he reaches the ceiling, is one of the silliest demises for a Bond Villain, while Tee Hee’s final confrontation with Solitaire and Bond on the train will be repeated too much better effect with Jaws in The Spy Who Loved Me four years later. Baron Samedi is shoved into a box of snakes, only to reappear on the train in the film’s final shot. And the music? George Martin’s score, the first non-Barry score in series history to this point, is serviceable but doesn’t have that zest and oomph that the Barry brass blare can bring. Paul McCartney & Wings’ title song, while well-regarded in some quarters, is a worthwhile single for the Billboard charts but worthless as a Bond anthem.

Moore’s sense of humor, his one saving grace, sparks the proceedings just enough for a devoted fan’s rewatch to not feel completely in vain, but not enough to recommend the film for rainy day viewing anytime in the near future. Live and Let Die is a curiosity, and belongs near the bottom of the pile when discussing the Eon Productions Bond series. It gets Roger Moore’s Bond tenure off to a sputtering start, with many peaks and valleys yet to come during his twelve-year reign as the world’s best-known super agent.