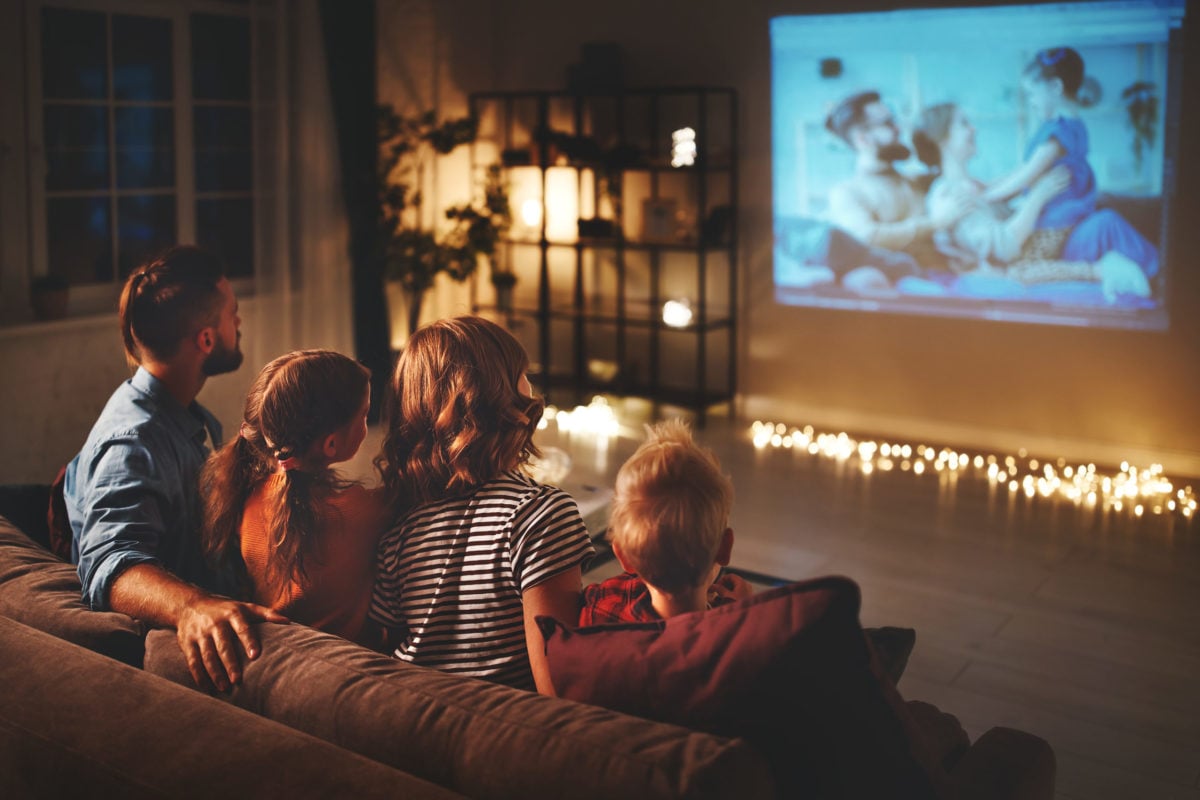 Much has been made over the loss of the theatrical experience during the COVID-19 pandemic, but have we gained more than we’ve lost along the way? While visionary auteurs like Christopher Nolan and Denis Villeneuve opine the tragic loss of the cinema, some of us are happier than ever to watch from home.

Though we all have treasured experiences from watching movies at the theater, there are countless reasons why watching from home can be the preferred way to go for folks from all walks of life, and we’ve included 10 of them below. Let the arguments begin!

Everyone has at least one story of annoying folks ruining a night out at the cinema for them. In fact, most of us have several. I can personally recall two of the worst off the top of my head. One was when I went to see The Matrix Revolutions on opening night only for a guy from an earlier showing to yell in the lobby, “Neo dies!” Hey, great, thanks for that chum, now I don’t need to watch at all.

Another was the 2017 It remake peppered with giggly, quippy teenagers who would not stop talking and making jokes the entire movie. It can cost upwards of $50 for even two people to have a night out at the theater, and for it all to be ruined by a completely random factor is hugely frustrating, especially for those who only go out once in a while.

Speaking of the cost of going to the cinema, the excessive markup on snacks and drinks has long been an irritating part of the experience. Naturally, popcorn and soda are the most egregious examples as both commodities are well known to be cheap, and theaters buy them in bulk, further augmenting the pricing structure.

This means the markup can be as much as a staggering 600%! Not only is price not a problem at home, you can be infinitely more creative in what you decide to make and eat while you watch. Heck, you can even pour yourself a drink or light up a smoke if you’re so inclined. It’s your home, after all, and no manager is going to give you the business about what you’re doing while you watch.

Sometimes you just miss something when you’re watching a movie. I can’t count how many times I’ve missed a piece of dialogue due to weird sound mixing or seen a character pop up after disappearing for half the movie and forgotten who they were. Luckily you can pause and even rewind a film at home to get a second shot at parsing things out in times of confusion.

There is no such luck at the cinema, where even your weak bladder can cost you 4 minutes of missed screen time simply in the walk to and from the washroom. This can be really irritating, as it forces you to sit uncomfortably to try and avoid missing things, all the while not even being sure when the film will end so you can finally get some relief.

The great thing about having movies on streaming services in the first place is how easy it is to access the film you’re trying to watch. With day and date releases, you can not only watch a new movie from the comfort of your home, but you can also rewatch it with a friend or loved one.

This is even true of home rentals, which are generally available for 48 hours, allowing you to watch a movie 2-3 times should you be so inclined. With trips to the cinema at an all-time high, going twice to the same film can feel particularly wasteful, but there’s no need when you’ve got other options.

As I’ve mentioned several times here, movies at the cinema can be pricey. Even ticket sales can range from $10-$20, depending on your theater. However, clever use of the digital model can moderate these costs considerably. For instance, if you were to subscribe to HBO Max in October, you could catch the just released Malignant, as well as The Sopranos prequel, The Many Saints of Newark, and Dune, for the price of a single monthly subscription.

That’s three major, high-profile releases for a mere $15–the asking price for a single ticket at most theaters. When many households are still making up for money lost during the pandemic, options like this are a lifesaver.

I’m sure we all have at least one experience from the cinema where the projector crapped out, or power was lost. Heck, you can even get unlucky and have a scratched 35mm print of a major release. Often this leaves you stuck with only having seen half a movie or a poor quality experience of the whole thing.

Now, to be fair, the power can go out, and wi-fi can drop while you’re at home as well. However, the irritation isn’t nearly as palpable as when you’re out doing an activity, only for the experience to be ruined by factors out of your control.

7. Discuss the Movie While Watching

Everyone’s experience as a viewer is different. Our attention to detail, memory, and understanding of the artist’s vision can completely differ when watching a film. These subjective elements are part of what makes art so fascinating in the first place, but they can also lead to confusion.

Let’s say one person is just popping in to see Black Panther unaware of the 16 or so other movies that preceded it in the MCU. Their MCU-obsessed friend can help fill in the gaps that don’t make sense, making for a better experience overall. And since you’re at home, you don’t have to worry about disturbing other patrons with your hastily worded whispers throughout the runtime.

8. Watch When and How You Want

Movies at the cinema need to have showtimes; there’s just no logistical way around it. Though these start times can be particularly abundant for popular films, that doesn’t always mean they suit how you want your day laid out. You don’t have to choose between the “too early” and “too late” start times at home, though.

Not only can you get up at 5 AM and watch a movie before work if you’re so inclined, but you can also turn a movie off partway through if you’re getting too tired to focus properly. While watching a film in two chunks may not be the optimal viewing experience, it sure beats dozing through the second half of a movie.

Lines are another natural part of consumer life, but that doesn’t make them any less annoying, particularly when they’re obscenely long. While digital ticket purchases have mitigated the ticket line considerably, that doesn’t help with concession lines.

Even if the kitchen can get a little crowded sometimes at home, you’re certainly not waiting 5 minutes for a single cup of soda, and that’s yet another reason why watching from home handily beats the cinema.

This last one is mainly for folks with kids. Though we all love our wee ones, they can make going out for the evening incredibly complicated. What if you can’t find a babysitter or the one you do have craps out at the last minute? Suddenly your plans for the evening are in the toilet, and you’re all dressed up for nothing.

Even if you don’t have kids, pet owners will know that stepping out of the house for just a few hours can mean coming home to an unwelcome mess on the carpet. You never know when your pet will have stomach troubles, but at least if you’re watching from home, you have a chance of getting them outside before they put a permanent stain down somewhere.

Casino Royale is Bond at his Badass Best