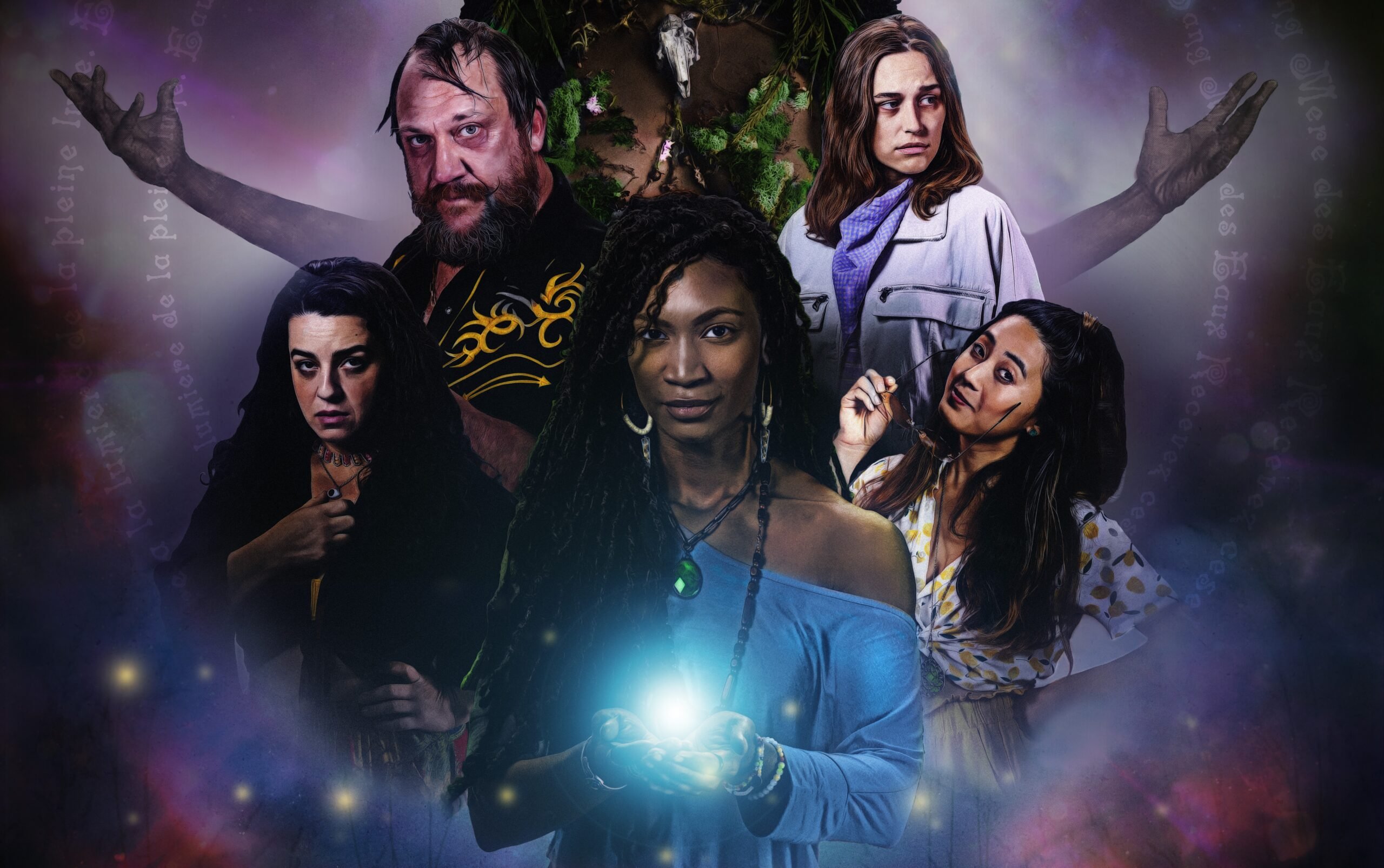 Erzulie opens on a gloriously feminist note: A group of friends are floating on a river together. Annoying jock Brock (Andrew P. Logan) chucks an empty beer can at one of the girls, laughing despite it having caused blood to drip down her cheek. He begins to tell her, in a typical dismissive tone, that it was “just an accident, don’t be such a b—“ and immediately gets swallowed up by the lake.

As Brock is flipping about in the water gasping for breath, we hear his high-pitched screams and wonder if it’s a prank, hoping that it’s not. Then the blood appears. And… Title card, complete with upbeat folk music. Welcome to Erzulie. It’s about to get horrific, and redemptive for the women on screen. That scene alone would be the perfect promo for the film. It’s everything we —women sick of violent, cocky white boys facing no consequences for their actions— want to see. But it gets even darker and more splendid.

The film (Directed by Christine W Chen) is named for the water goddess Erzulie, protector of women. It follows four friends who meet up after staying at the same cabin where they met five years ago during a retreat. “Drunk spring breaker got nabbed by an alligator, so the river is off-limits until we catch it,” the resort’s caretaker, Rhett (Jason Kirkpatrick), informs the women. Rhett is amusingly terrible; gleefully failing at customer service, and absurdly absorbed in his step-mommy issues. He’s also being paid handsomely by a chemical company so they can discreetly dump their waste in his resort’s river.

Each of the women has her own struggles: Wendy (Courtney Oliviér) has been fired because she resisted an increase in policing at the women’s shelter that she ran. Wendy believes that the goddess —known to favor women— will grant wishes to any woman who bleeds in the river. Violet (Elizabeth Trieu) is dealing with sleep paralysis while reliving memories of her childhood attacker in her dreams. Ari (Diana Rose) is living with the guilt of feeling responsible for her brother’s death. Fay (Zoe Graham) is noticeably down, and jumpy with terror that her abusive stalker ex-boyfriend will find her. The women are super supportive of each other, particularly Violet of Fay, who stays close and is teaching her self-defense techniques. Her gentle protectiveness ultimately leads to a sweet romance arc between them.

One night, the women find Wendy at the river performing a spell to reach Erzulie. They’re reluctant and concerned about her mental state …until it seems to be working. The water bowl begins to glow! Her friends decide to join the ritual despite the river smelling “like death”, cutting themselves just enough to bleed into the river. The next morning, they feel unwell, their wounds itching. They also find a naked woman (Leila Anastasia Scott) unconscious near the river. When they carry her back to their cabin, the symbols above their door start to glow, and unbeknownst to them, their wounds begin to heal.

When Fay’s evil ex-boyfriend James (Alexander Biglane) finds their cabin, before the women see him or notice that the mysterious naked woman is awake, he tries to break in. The mystical woman furiously drags him far away, gutting him like a fish, and throwing him into the resort pool.

The women eventually discover James’ body in the water with a majestic mermaid —the strange woman— who swims up to them and says that, for the kindness, they have shown her: “Whatever your heart desires, you shall possess it.” Wendy is passionate about her request: She wants justice, and revenge; She’s tired of being under the thumb of “brutal, selfish men who ruin people’s lives and get away with it.”

Three of the four main protagonists are people of color, as is the mermaid, and Erzulie features a secondary storyline about a Black visitor to the campsite who’s seen conducting secret research —He’s heard on the phone to his superior reporting that “the fish are glowing, and mostly dead.” It’s always wonderful to have diversity on screen, especially in this genre. But as this is a Horror film, viewers of color and queer audiences will want to know: Do the characters who represent us die? The answer, I’m pleased to report, is no.

Sometimes comedic (the women use a hairdryer to help turn the mermaid’s wet fins into legs; realizing after making their wishes that they “probably should have asked for a cure for cancer, or help with the dead body.”) and consistently captivating, Erzulie is rooted in the strength of a supportive friendship at a difficult time.

The film also confronts, briefly but quite brilliantly, the complexities of abusive relationships. When the women are left to create an alibi for the dead body in the pool, Fay wants to come clean and blame the mermaid; The idea is perplexing and unconscionable for Wendy: “We are not selling out a goddess to the police!” she shouts. “How is she the monster in your eyes and not James?” Wendy demands of Fay. “I loved him!” Fay cries, “You were a counselor. How do you not understand that?!”

When Rhett reappears —after missing the day’s activity because he was at the strip club spending his hard-earned toxic waste money— he confronts Wendy with a gun: “Now, are you gonna be the one to take the fall for that body that’s in the pool, or are you gonna tell me where the mermaid is?” Until then, the women had no idea that he knew about the mermaid’s existence. It’s clear to the audience and to the women —between the researcher’s biohazard signs and Rhett’s aggressively inquisitive behavior— that there are many dark secrets being hidden around the property.

The women use creative defense techniques to restrain Rhett, leaving him handcuffed and flopping on the ground, shouting “You think she’s some type of mystical feminine protector; She’s nothing but a man-eater!” In the women’s experience, both are true. To the audience, both are spectacular.

Erzulie is a film made of rituals and confessions, the supernatural appearing where fear and rage intertwine. Fiercely feminist and socially conscious; it’s a horror film that honors female friendships, offers vengeance on behalf of wronged women, and reminds us to respect each other and the bodies of water we enjoy.

The Lost World: Jurassic Park Carries Few of the Charms of its Predecessor

Lolita at 60: Through Virgin Eyes