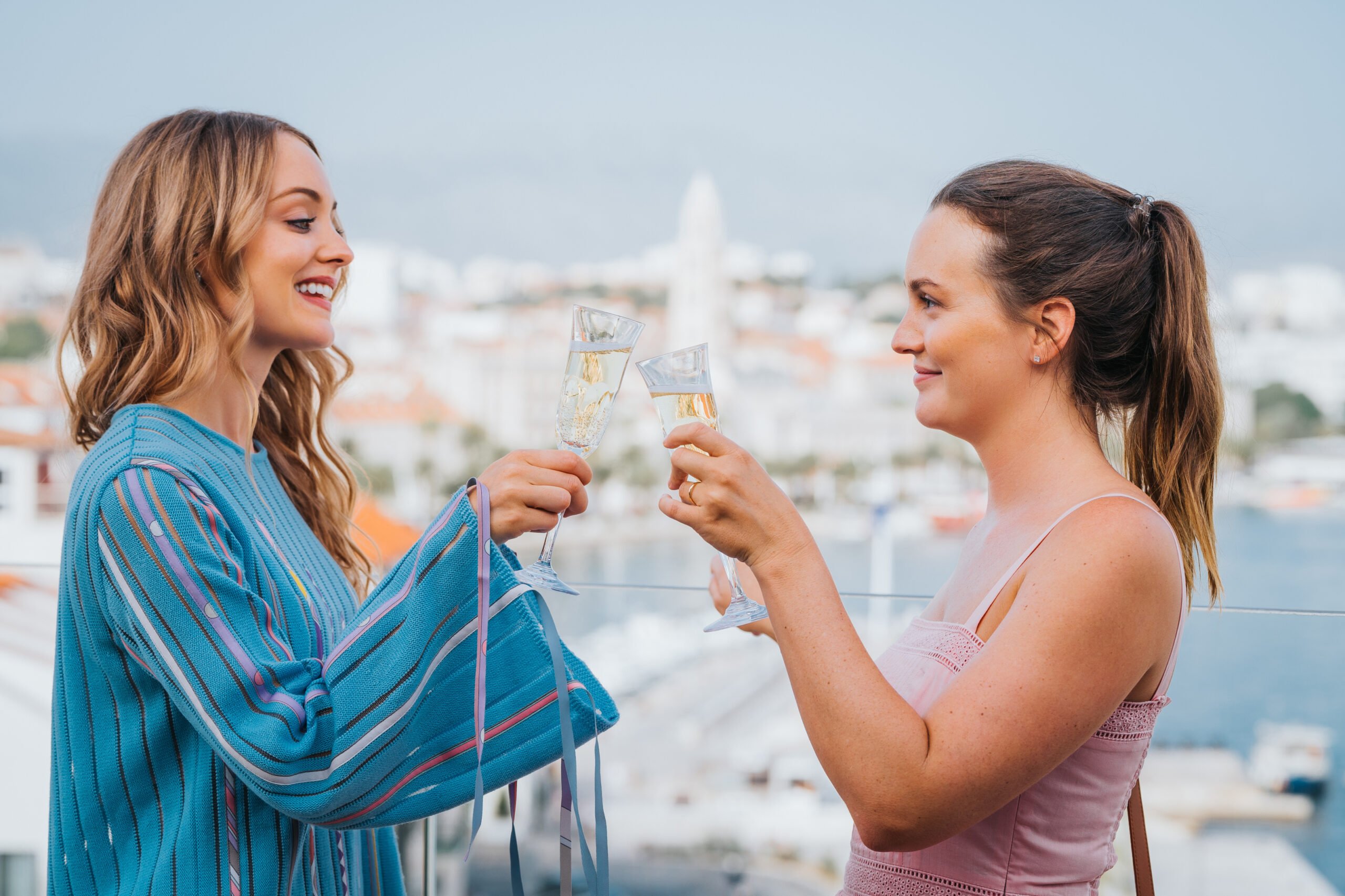 The Weekend Away Review

Fast-paced and perfectly edited, at a wonderfully-succinct 1-hour and 31-minutes exactly, The Weekend Away is the ultimate summer-holiday thriller experience. Audiences will be rethinking suspects and re-examining the night in question from all angles; It’s a twisty ride with a very satisfying ending.

Beth (Leighton Meester) is in Croatia for what seems to be her first outing since having a baby, to spend the weekend with her best friend, Kate (Christina Wolfe). The two women are incredibly different —Kate is secretly texting mysterious men, charging the lavish trip to her exes’ credit cards, doing drugs in the taxi; Beth is at the club naively asking men “Do you wanna see pictures of my baby?” while she’s being flirted with— but who among us doesn’t have at least one opposites-attract close friend from college who we are thrilled to see for a weekend at a time!

When Beth arrives at the extravagant rental place which Kate has chosen, they get dressed for a night out. The fun night begins well, but then there’s a flash of chaos and Beth passes out. Unlike The Afterparty, we aren’t reliving the night while Beth figures out the truth; When Beth wakes up, we are as lost, confused, and interested to know the answers as she is. By minute thirteen, Kate has disappeared, and we (and Beth) have no idea where she went.

“It’s a classic Kate move, going missing,” Kate’s ex-husband tells Beth when she calls him. “Drama is in her DNA.” It’s clear that Kate has been lying for longer and in bigger ways than Beth can imagine. Kate’s done this before —disappeared without warning or contacting him— when they were married. He tells Beth to just forget about it. But Beth is sure something strange is going on, and she believes that Kate would not have left her alone like this.

There’s a convincing balance between Beth’s genuine belief in the good in people, wanting to trust her instincts in each situation (“Your heart is your guide,” a new friend observes), and her knowledge that realistically, the world is a dangerous place for a woman alone in a foreign country. The screenplay (by Sarah Alderson) is a breathtakingly familiar account of a woman’s learned suspicion of society clashing against the terrifying, unfamiliar situation she finds herself in now.

Any woman who has traveled, particularly alone, will see the sharp and astonishing truth in even the most relaxed scenes. Leighton Meester’s performance is exquisite —every crease in her brow, every panicked look in her eye as she gets new information; Her desperate, tearful, defensive cries are distressing to witness.

The script elegantly captures the terror of being a woman traveling alone, second-guessing everything, questioning everyone; wondering if there was anything you could have done differently, terrified that it could have gone more wrong than it did. Fortunately, the fast-paced film keeps things moving along swiftly so there’s not much time to linger.

The Weekend Away’s brilliant pacing continually provides clues for its audience to consider —subtle blink-and-you’ll-miss-it looks between characters, and more obvious suspicious lingering shots— but it also repeatedly delivers the delicious thrill of realizing that throwaway remarks or silly moments you hardly registered actually mattered deeply. Every second counts in this film, and the stakes get higher for Beth until the absolute last minute.

One of the best parts of this film is its conversation with the women in its audience: There’s nothing quite like the satisfaction of a story where the men are all primary suspects, and the women are allies —because that’s the realistic perspective for so many of us; It’s a method of survival. The male cop (Amar Bukvic) who Beth first reported Kate missing to doesn’t even file the report. His dismissive behaviour is unsurprising but frustrating. He’s also loathsome when she’s adamant that she “didn’t do drugs, I was drugged. There’s a difference.” Then Beth meets a female cop (Iva Mihalic) who learns about her case, and things immediately begin to change.

The role that local (foreign, to Beth) police plays in this story is chilling to the bone. It’s worth the reminder here that justice is absolutely served, but not before we face the haunting, enraging reality that is abuse of power and corruption. The Weekend Away offers insight into crimes against women in a digital age; providing clear commentary on the misogynist police system, the risks of accessible surveillance culture, and the dangers women face when simply trying to enjoy their lives. Though the topics are dark, director Kim Farrant makes full use of the contrasting lightness in Croatia’s summer landscapes: warm terracotta, sky blues, and subtle linen colors typical of the vacation experience.

There’s a beautiful sense of solidarity between immigrants, and between women, throughout this film. At first, it feels problematic that they’ve placed a Syrian refugee (Beth’s taxi driver on the night in question) in the mix as a potential suspect, but the film handles any stigma and suspicion with surprising compassion and nuance. The way they handle the Zain’s story (played with sincerity and tenderness by Ziad Bakri, the only person of color in the film) felt honorable and thoughtful.

The Weekend Away effortlessly maintains its thrilling pace, delivering a very satisfying sense of justice. But there’s a multi-faceted pleasure to be drawn from the experience of watching it: This fresh take on a circumstance where victims are often left without help or an answer offers the vindication of a film nodding its head at the audience —women in particular, who know the threats of society at a visceral level— saying “We know, we get it, we’ve got you.” Right until the very end!

Watch The Weekend Away

Trauma Cleaners Get the Spotlight in Clean