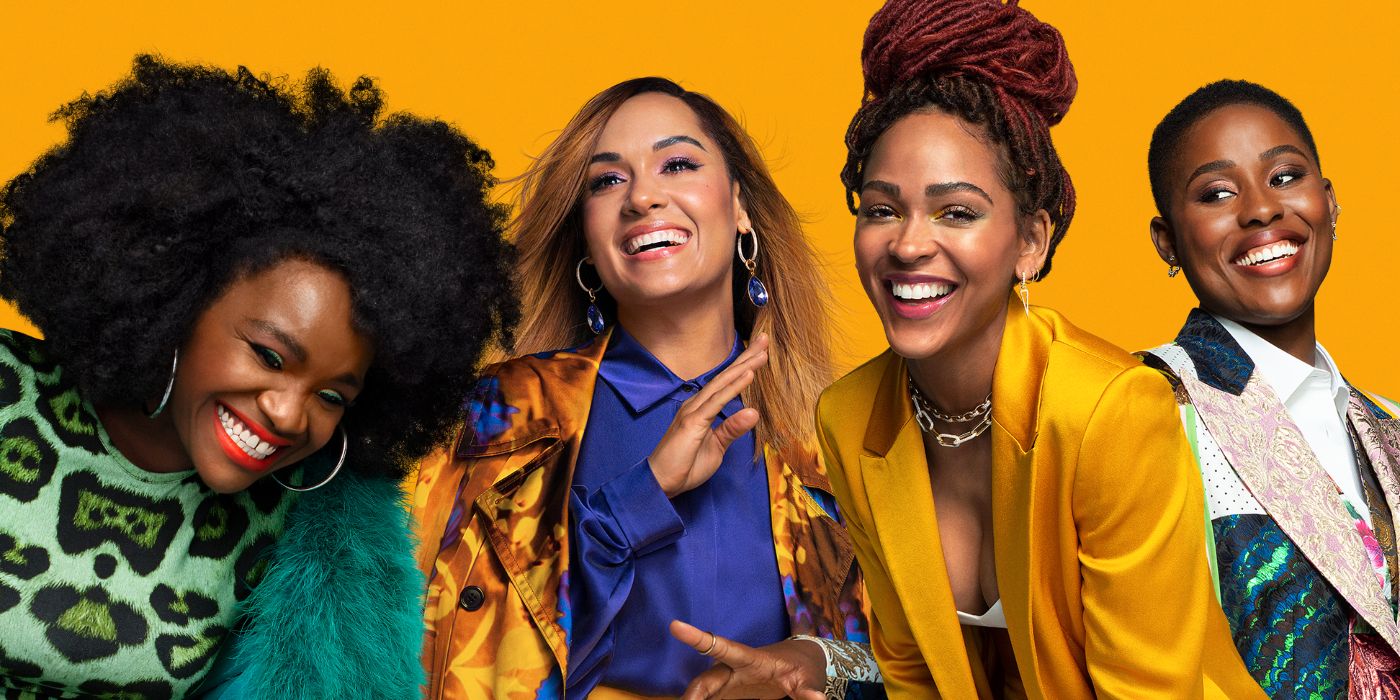 “Will we live to see a time when Sephora gets turned back into a jazz club?” is the tweet that appears on screen as Camille (Meagan Good) types it. She’s standing in the middle of a street in a rapidly gentrifying Harlem. The question creates a moment way more powerful than the narrated opening scene it takes place in; one drowning in exposition about what it’s like to be a woman in 21st-century Harlem.

While the scene feels more like a trailer for the show than the actual show, the characters pose a compelling enough argument to pull through the episode —then each episode of Harlem ends with a major surprise that entices you to watch the next one! These easily bingeable escapades lure you into watching what is ultimately an excellent and highly entertaining show.

Created by Tracy Oliver (Girls Trip), with Amy Poehler and Pharrell Williams producing, Harlem’s first season is a satisfying ten episodes exploring the love and work lives of four ambitious women. They’ve been friends since college and, now at wildly different stages of their careers, are all looking for their own kind of romance.

Camille (Good) is an adjunct professor teaching Anthropology of Sex and Love at Columbia. Dubbed “the one that loves to tweet,” she did her thesis on gentrification, and there are waitlists to join her classes. Each episode starts with vignettes depicting how the four characters’ lives coincide with the topic of her latest class —for example, the Christmas episode where she’s giving a lecture on “cuffing season”. She’s simultaneously struggling to get tenure and to avoid her ex when he comes back to town with a fiancé.

Quinn, (Grace Byers) whose dating life is plagued by an endless stream of duds online, becomes a disappointing running joke on the show. Her biggest problem is that her ethical clothing store isn’t turning a profit, which forces her to confront the many ways her mother sees her as a disappointment. Her character rides a majority one-note arc, but by the end of this season, Quinn has the most promising, surprising, and exciting future —and the main reason I’d look forward to tuning in if it’s renewed for a second season.

Angie (Shoniqua Shandai) is a professional singer who gets involved in a truly phenomenal production of Get Out: The Musical. Shandai is spectacular in this role, delivering comedic lines like “When they go low, I go basements!” and “Are we really commuting for cock?” with a cheeky fire that makes them feel iconic. Her performance is equally strong when Angie surprises us with insightful social commentary like “this whole Black Excellence movement was a tool of oppression.”

Despite being aware of contributing to the canon of Black female-friendship shows and their significance in serving the community, with Angie Harlem appears uninterested in subverting the stereotype of the darkest-skinned characters being the most obnoxious and the least financially independent. (Also worth noting here is the perplexing cinematography: While generally bright and vibrant, it occasionally becomes unsure of itself and seems to forget how to light dark skin —hiding Angie’s stellar performances in dim corners and shadowy angles —only for it to correct itself in the next scene, then fail briefly again at a later stage.)

Tye (Jerrie Johnson) is the CEO of a dating app exclusively for queer people of colour, who ends up dating the white writer of her Forbes profile (and spirals accordingly about it). Harlem explores the complexity of her queerness with an authenticity and nuance not often seen on screen –let alone in a Black context. This includes her closeted youth, and the sharp moment when a doctor assumes she doesn’t want to have children because she is masc-presenting.

Queerness is beautifully incorporated into Harlem: Tye’s sexuality is simply another part of the friend group’s routine; They alternate between movie night at each other’s houses as unremarkably as they rotate between nights out at gay and straight clubs. There’s also a startlingly casual acceptance of a Black male side-character being openly bisexual —incredibly rare, and very positive. Most thrilling is the wonderful, bi-awakening storyline that’s opened up for one of the women (“She said yes! It’s official! I’m an LGBTQ!”)  which is delivered with all the charm and chemistry and without much hesitation.

Though of course reminiscent of Sex and the City, —comedic misadventures crafted around universal stories of female friendship and desire, and set in a specific, beloved location— Harlem is distinctly written to entertain a community that deserves more confidently optimistic, enjoyable content than it is offered: Black hair and Black bodies are shown authentically and joyfully. The cast wears a range of wigs, blow-outs, afros, dreadlocks, shaved heads, and twists —and they switch it up as casually as Black women realistically do.

The episode reimagining fairytales (making use of charming animation and dream sequences) is a masterpiece. It opens with scenes from Meghan Markle’s wedding, with Camille narrating that “even princesses don’t want to be princesses anymore.” Later, there’s a romantic wedding scene where the bride has her dreads twisted in an updo, and the couple’s first dance is set to an orchestral version of Nelly’s “Dilemma”.

Harlem’s flawless soundtrack is filled with RnB and popular hits from young Black artists including Doja Cat, Joey Purp, and SZA. As with the pilot’s opening scene, the song choices can initially feel too on the nose, but once you connect with the tone of the show, its tactic of placing relevant lyrics into the scene —An RnB singer chanting “I’m single as fuck, single as fuck” as a character scrolls a potential suitor’s Instagram account, for example— feels more like an addition to Harlem’s conversation with its audience.

And that conversation is a thoroughly entertaining one, radiant with comedy gold: The aforementioned Get Out musical is choreographed and directed to astounding perfection; Weather Wives, a fantastic riff on the popular ‘Housewives’ reality TV franchise, hilariously stars women whose husbands are prominent meteorologists; An old white man who discovered he’s 3.6% Japanese through 23andme proclaims that the news “really gives new meaning to the word ‘Caucasian’.”

One of the most powerful episodes is titled The Strong Black Woman. “She is resilient, independent, and capable,” Camille’s opening monologue reads; “But what if she isn’t?” The episode’s examination of the popular term associates it with the way society is constructed for Black women to suffer in silence. Harlem confronts medical bias with an infuriatingly accurate depiction of how doctors treat Black women, particularly when it comes to gynecological issues and the subject of our pain.

Tye’s hospital stay and fibroids diagnosis in this context allows the show to explore what happens when all the career-driven energy that is built into Black women on the road to success isn’t possible. Similarly, Camille is shown to skip therapy appointments when her job becomes demanding. “Do you only take care of yourself when your work schedule permits?” Her therapist asks when she finally does show up to a session.

The Harlem writers introduce nuance into topics that Black professionals encounter and wrestle with throughout their careers: Questioning the ethics of working at a white-owned restaurant in a gentrifying area, or teaching at a university that isn’t an HBCU; the lasting financial implications of criticizing Black art; white co-workers who make themselves the victim when you call out their microaggressions.

The show does an excellent job of highlighting the numerous ways Black people have to hide their true feelings in order to stay in contention for a job within a system controlled by white people. “I was just keeping it real,” Angie tells Tye in one of the many points when she calls it as she sees it. “Oh, you’re gonna be keeping it real unemployed!” Tye shoots back.

Harlem succeeds with brilliance, playfulness, and humour even in its most thought-provoking moments. It’s a celebration of Black excellence while simultaneously taking down the concept —and its riveting finale leaves the door open for a well-earned second season.