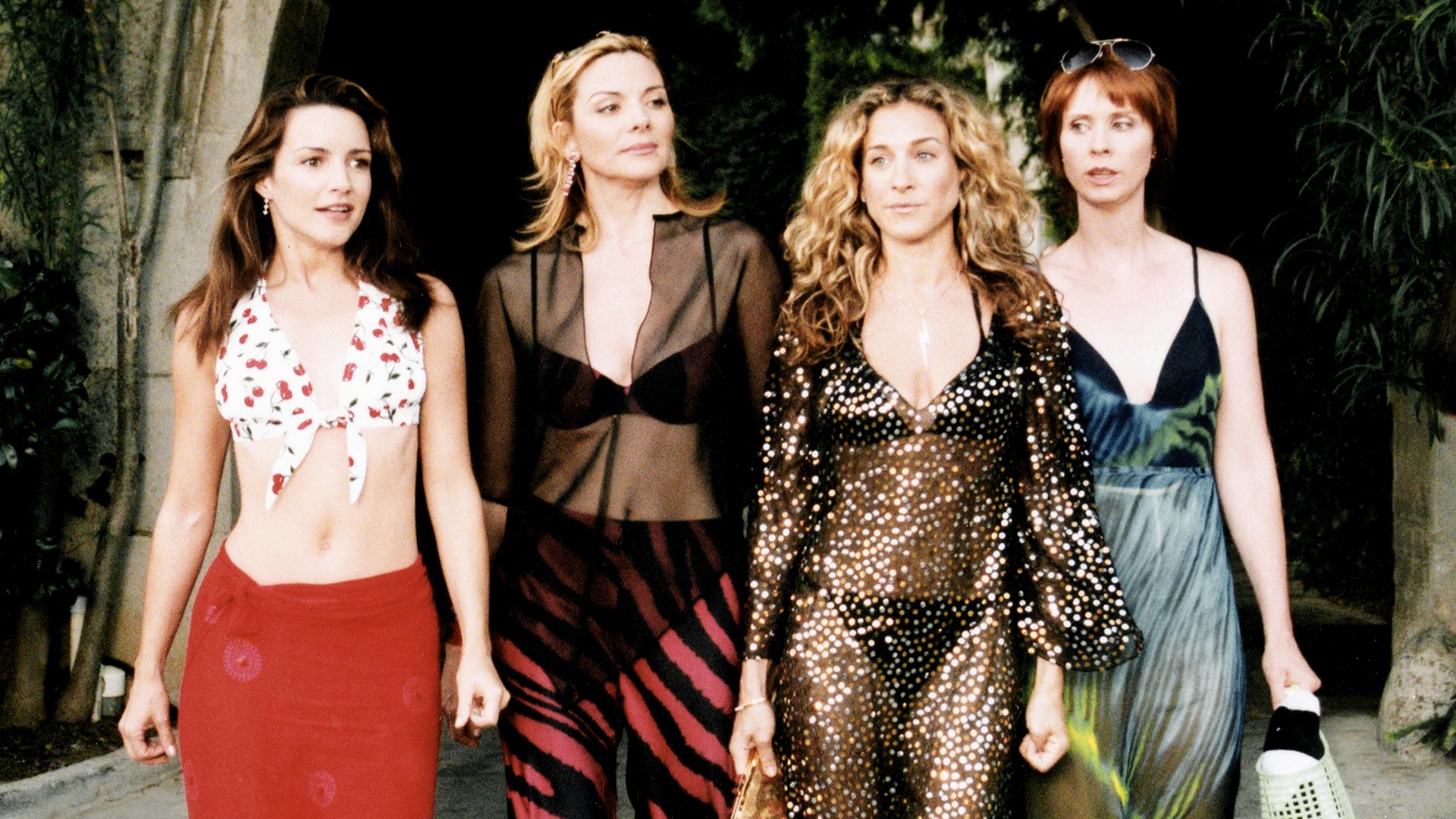 9 Best Episodes of Sex and the City

Just because Sex and the City may have ended in 2004 doesn’t mean the fun has to stop. Coming to HBO Max on December 9th is And Just Like That… which is set to continue to stories of Carrie Bradshaw (Sarah Jessica Parker), Charlotte York (Kristin Davis), and Miranda Hobbes (Cynthia Nixon). Although Samantha Jones (Kim Cattrall) won’t be coming back for the newest installment of the famous quartet’s adventures, that doesn’t mean there won’t be plenty of fun to be had on this new series. But, in case you’re feeling nostalgic, we at Tilt Magazine have put together a list of the best episodes of Sex and the City to get you ready for And Just Like That…

This episode is one part heart and one part hilarity as the girls find themselves in some sticky situations. Charlotte is in wedding planning hell but is thankfully saved by stylist Anthony Marantino (Mario Cantone) who she crowns the “Italian mother she never had.” Meanwhile, Miranda starts a love-hate relationship with a sandwich mascot yelling “eat me.” Samantha overcomes her fears and gets an aids-test so that she can have sex with Tom Reymi (Sam Robards) in his new swing. Carrie, on the other hand, continues her affair with Mr. Big (Chris Noth) but unfortunately, Natasha (Bridget Moynahan) comes home early while Carrie is alone in their apartment. The episode does a great job of contrasting the fun adventures of the girls, like wedding plans and vulgar sandwiches, with more serious subjects, like infidelity and aids.

One of the funnier episodes, “La Douleur Exquise!” explores the idea of fetishes in our regular lives. Samantha’s PR company is in charge of organizing the grand opening for a new S&M-themed restaurant and she celebrates the idea of living your fetish life out loud. Carrie, on the other hand, explores her toxic relationship with Mr. Big when she finds out he might be moving to Paris for the next year. Stanford (Willie Garson) navigates a strange online relationship with a man who goes by the username BigTool4U while Miranda navigates a real-life one with Jack (Will Arnett), a man who can’t get off unless he has sex in person. In what has to be the funniest storyline in the show, Charlotte finds herself in a strange relationship with a shoe salesman named Buster (James Urbaniak) who gives her free shoes in exchange for touching her feet. It’s a fun episode that looks at how we all have kinks and fetishes, and how leaning into them can set us free.

In one of the most iconic episodes of Sex and the City, Carrie starts her morning off by getting dumped by Jack Berger (Ron Livingston) on a Post-it note. Determined to avoid remembering that day as the day Berger dumped her, Carrie asks her friends to go out on the town for a fabulous night of fun. Samantha, thankfully, has a VIP ticket to the opening of a club called Bed. Unfortunately for Carrie, she ends up next to a group of Berger’s friends and goes off on them about how to break up with someone after they tell her that women are scary and there’s no good way to end a relationship with one. Carrie then gets high, gets arrested, but gets out of trouble when she shows the cop the Post-it note reading “I’m sorry. I can’t. Don’t hate me.” It’s one of the most memorable episodes in the series and i

While out on the town, Carrie runs into a New York fashion show producer who’s assembling a group of models and real people to be featured on the runway. She insists that Carrie participate in the show and, reluctantly and with great pressure, she agrees. Meanwhile, Charlotte finds out that her vagina is depressed, Miranda starts dating a man at her gym, and Samantha gets nude photos taken to celebrate her body. While at the fashion show, Carrie is told she’ll no longer be wearing a dress and instead will be in bejewelled panties with a blue jacket, which causes her distress. Eventually, she takes to the runway, falls on her face, but forces herself to get back up and finish the catwalk. It’s a great episode that looks at what it means to persevere in the face of self-doubt and negative self-talk. (Plus, Stanford calling Carrie “fashion roadkill” makes the episode.)

When the girls go to Atlantic City to celebrate Charlotte’s 36th birthday, the girls find that their relationship is going through a tough spot. Carrie is determined to get a photo of all four of them, but their insecurities keep pulling them apart. Charlotte spends the episode wrestling with her age, not wanting to admit she’s getting older. Miranda wrestles with life post-pregnancy and struggles with her changed body. Samantha struggles to trust Richard (James Remar) with her heart after he’s cheated on her in the past and she ends up breaking up with him. Carrie, meanwhile, faces her insecurities about being single. The episode is a great reminder that friendship takes work to last and that it shouldn’t be taken for granted. It’s also great to see a show that’s so often focused on relationships with men focus on the relationship between the four protagonists.

Arguably one of the best episodes in the entire series, “A Woman’s Right to Shoes” looks at the disparity between single women and those who choose to settle down and have kids. After Carrie’s Manolo Blahnik shoes are stolen at a child’s birthday party, Carrie asks Kyra (Tatum O’Neal), the host, to pay for them but is told that she shouldn’t have to pay for Carrie’s lifestyle. She also makes a jab about how she used to wear those heels too, but only “before I had a real life.” Not one to take things lying down, Carrie ends up calling Kyra to let her know that she’s getting married to herself, and has registered with Manolo Blahnik. It’s a fun episode that makes a great point about why we celebrate some choices while ignoring others.

If you thought motherhood was tough, well, you’d be absolutely right. This episode looks at Miranda as she struggles with her child who won’t stop crying, but who thankfully has a neighbour who comes to her rescue. Samantha then gifts Miranda a coveted spot at a famous salon as an apology for neglecting their friendship post-pregnancy. Unfortunately, the vibrating chair that was keeping Brady from crying breaks, but when Miranda comes home she finds her son quiet and sleeping against Samantha’s “back” massager. It’s a great episode about friendship, selflessness, and the sacrifices we need to make if we want to fit into the lives of the people we love the most.

The third-to-last of the series, “Splat” is a sombre and funny look at the end of an era. Carrie’s boyfriend, Aleksandr (Mikhail Baryshnikov), holds a dinner party for all of her friends and tells them that Carrie has been invited to move to Paris with him. Then, at a dinner party at Enid Frick’s (Candice Bergen) apartment, an ’80s socialite falls out of a window. At her funeral, Carrie announces that she’s quit her job and is going to move with Aleksandr. It’s a beautiful episode that looks at love, friendship, and what it means to move on. It also asks audiences to consider what a person is willing to give up for the person they love and if it’s really worth it.

Widely considered to be one of the best episodes of Sex and the City, “I Heart NY” was filmed before 9/11 and aired five months after the tragedy. The episode gives audiences a nostalgic and idyllic view of the city and was widely considered to be a love letter to New York. As far as the women of the show, this episode revolves around Mr. Big telling Carrie he’s moving to Napa and so the two spend one last romantic night in the city together. She wears a beautiful dress and buys exquisite shoes to match the occasion. Unfortunately, Miranda goes into labour and cuts the night short for Carrie and Big. But, to everyone’s delight, little Brady is born (although, sadly for Carrie’s shoes, Miranda’s water breaks all over them in the process). It’s a beautiful episode about life, love, and the friendships that keep us going and it’s no wonder that “I Heart NY” is the clear-cut choice when it comes to the best episode of Sex and the City.

Succession, Hints of the Fall of the Roman Empire