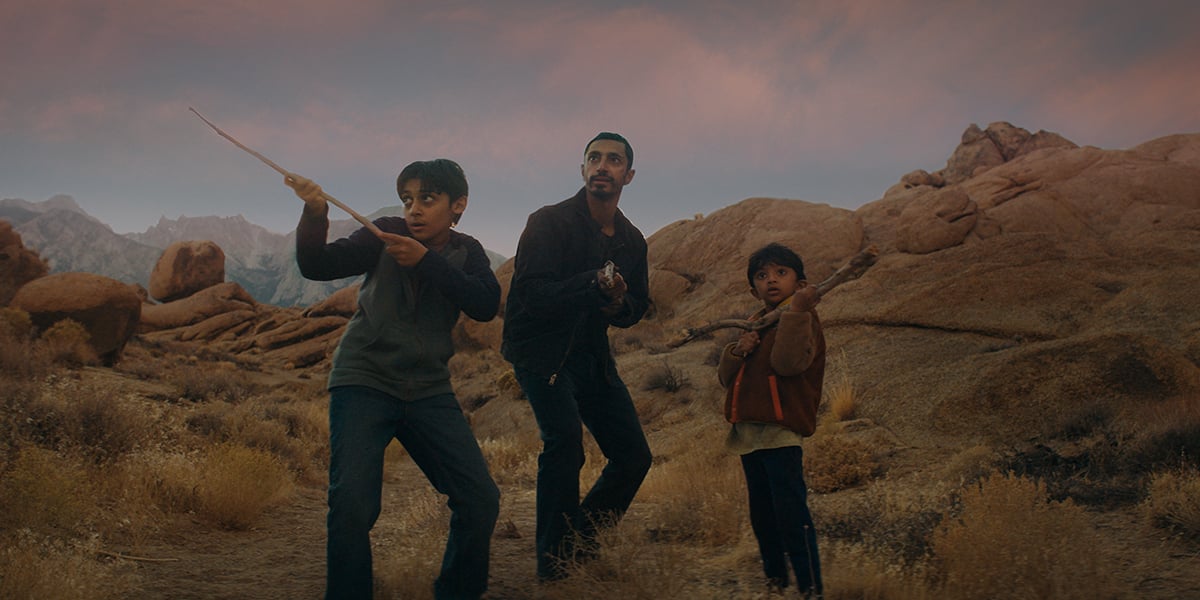 Riz Ahmed leads an interesting science fiction thriller that never quite gets below its surface-level thrills in Encounter. Directed by Michael Pearce, with a screenplay co-written by Pearce and Joe Barton (who also wrote The Ritual), there’s a kernel of an idea at the core of Encounter that explores the treatment of veterans with post-traumatic stress disorder. However, with the great chemistry between Ahmed’s character and the two children he tries to keep safe from an alien invasion, the film sacrifices an emotional depth in exchange for maintaining pace and pulp.

Believing an alien invasion to have secretly taken place and parasites now taking over human bodies via insects, Malik (Ahmed) takes it upon himself to save his two sons while the rest of the world remains unaware of the invasion. It’s the dead of night when he takes Jay (Lucian-River Chauhan) and Bobby (Aditya Geddada) from their mother and step-father, coats them with bug spray, and throws them into the back of his car for what they believe to be a surprise road trip. What follows is a state-wide manhunt as Malik attempts to evade the people he believes to be infected, and who believe Malik to be kidnapping his children.

There’s a lot of Invasion of the Body Snatchers by way of Jeff Nichols throughout the film, which is a welcome form of storytelling. Pearce and Barton let the importance of the family unit in the face of an unknown threat take center stage. The chemistry between the two brothers and their long-absent father helps immensely with giving this cross-state road trip levity with plenty of humor that hides the ugly truth right beneath the surface.

Admittedly, the first half of the film appears to be your traditional science fiction romp with some family learning, but it has a mid-film twist (which isn’t exactly well-hidden) that shakes things up drastically. What turns from an innocent road trip becomes a tense thriller that feels somewhat exploitative as it doesn’t really address its twist head-on, instead just using it as an excuse to have a more immediate encroaching threat in the screenplay. It’s still exciting and suspenseful, but by not having the patience to really dive into the reveal’s implications it feels silly.

Encounter does have magnificent visual effects when closing in on the parasites, insects, and a lot of eyeballs with creepy bugs swimming around in them. All of that sci-fi content is neat, and set against the backdrop of rural America, it looks gorgeous. The science fiction angle is an easy hook and when the twist happens it actually opens the film up to be far more impactful.

Where it stands though, Ahmed and his chemistry with the two young actors playing his children results in the heartbeat of the film. Every scene with Ahmed is great because he’s such a charismatic actor capable of bringing humanity to a character currently ostracized from the rest of the world. Malik is alone, and if he can’t save his sons then what’s the point of living through an alien threat? Encounter’s strengths lie with its characters, but there’s so much untapped potential to go beyond the thriller plotline that it ends up disappointing once the credits roll.