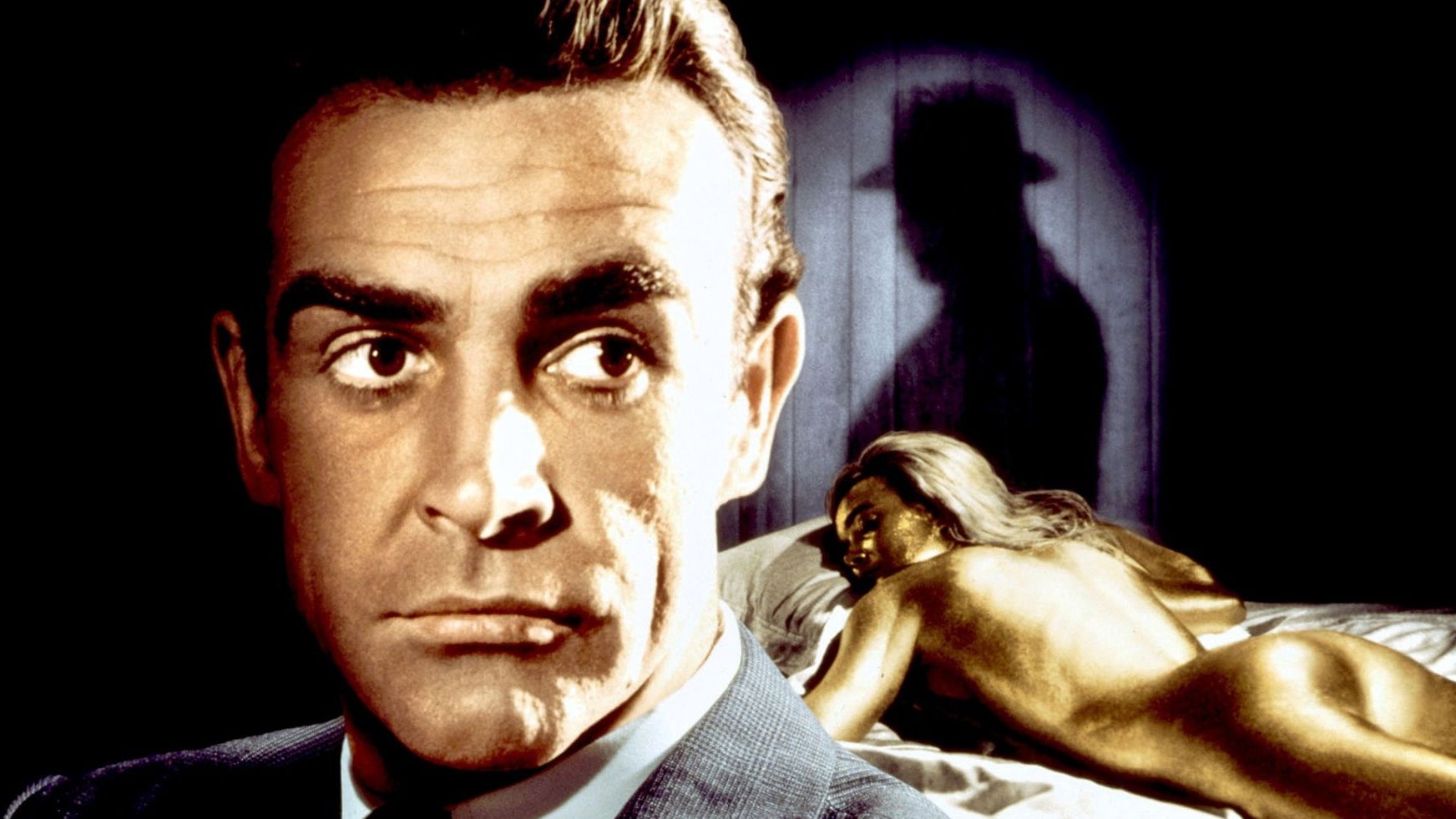 Even if you had never seen this film, just as with Ursula Andress rising from the waves like a bikini-clad version of Botticelli’s Venus in Dr. No, you’d recognize the iconic image. The girl, the bed, the gold paint. The sight of gilded Shirley Eaton spread out on the sheets is so evocative that – like Ursula – it was subjected to an ironic nod in a later Bond film. If Halle Berry wore the updated bikini in Die Another Day, instead of gold Gemma Arterton did sheet-duty wearing nothing but a coat of oil for Quantum of Solace.

Gold was the symbol of wealth in 1964, but in today’s world of global warming and fuel station queues, hydrocarbons have taken its place in the cultural lexicon. And Goldfinger is a very old fashioned film – right from the overblown title song (Shirley Bassey chewing the vocals like only a Cardiff girl can), through to Oddjob with his killer bowler and Pussy Galore in skintight leather – the third Bond film is as dated as a High School cheerleader.

But is it still worth watching? A film can be dated, but that doesn’t mean it isn’t a classic. Let’s consider.

The premise is this: Auric Goldfinger, industrial tycoon (played by Gert Fröbe who was hired after the producers saw his performance as a child molester in the film Es geschach am hellichten Tag) plans to corner the world market in gold by irradiating the US stocks at Fort Knox and rendering it unusable for decades. He is foiled in his mission by Bond, with the assistance of fly-girl Pussy Galore.

So far, so Bond. This is set pattern stuff: insane megalomaniac attempts to take over the world with his death ray. Only Casino Royale deviates from the formula (and that by not very much). We can’t fault Goldfinger for that, nor for the fact that gold has now been replaced by rare piles of earth and cobalt as the mineral de jour. Like diamonds, gold still has a luster we respond to, with its associations to royalty, greed, and the exploitation of the New World. It’s beautiful and corrupt and, in that sense, a better choice than mundanities such as the oil pipelines of The World is Not Enough or the silicon chips of A View to a Kill.

The Bond is Connery – one of the world’s most attractive men ever (I know this as a scientific fact) – and his masculinity is a perfect foil for Goldfinger’s campy vibe. We can believe in this Bond, even when Oddjob is trying to kill him with a bowler hat, even when Goldfinger leers at him and points a laser at his crotch. Put Moore in the role and the film would collapse under the weight of its own double entendres, but with Connery wearing the smoking jacket and sipping the martini, we can swallow the one-liners with a straight face.

The same goes for the Bond Girl. The two Mastertons (Shirley Eaton’s Jill and Tania Mallet’s Tilly) both die early on, leaving Honor Blackman to handle the man-wrangling and this along with Connery is where Goldfinger really scores. Pussy Galore is arguably the best Bond girl of the posse, beating off stiff competition from Diana Rigg as Tracy Draco and Michelle Yeoh as Wai Lin (no pun is too low, seems to be the motto of the Bond writers). Blackman, already well known through her role in the Avengers series, has a salty toughness that balances the saccharine of the love scenes. Most Bond girls don’t put up that much of a fight, but Galore tosses Bond about like she means it, allowing us to accept her eventual capitulation as a meeting of equals (the same formula works for Rigg and Lazenby in On Her Majesty’s Secret Service) rather than the usual Bond-conquest-of-inferior-female-shtick (and if Bond-sexism happens to annoy you, this might make you feel better).

And what about the anti-hero and his sidekick? The producers originally wanted Orson Welles for Auric Goldfinger, but he wanted too much money (also, think of the catering budget). Casting Gerd Fröbe was a gamble – he spoke no English, requiring all his lines to be dubbed – but the choice works. Fröbe’s Goldfinger is a man you’d pay not to have touch you (‘such a cold finger’ croons Shirley in the title sequence and you know exactly what she means), lending extra creepiness to the coating of Jill in gold paint. Even though Oddjob does the painting, the thought of Auric looking on with his tiny pig eyes is enough to raise more than a few goose-pimples. As for Oddjob, subject of a thousand off-colour jokes – the Japanese-American wrestler Harold Sakata has just the right combination of cartoonish thuggery and genuine physicality to make the fight scenes work. Check out the moment when Bond lugs a gold bar at him and it bounces off Oddjob’s chest. Sakata’s smug grin is a real freeze-frame moment.

Old fashioned? Yes. A classic? Also yes. Goldfinger is one of the few Bond films with a 24-carat quality that warrants repeated viewing.