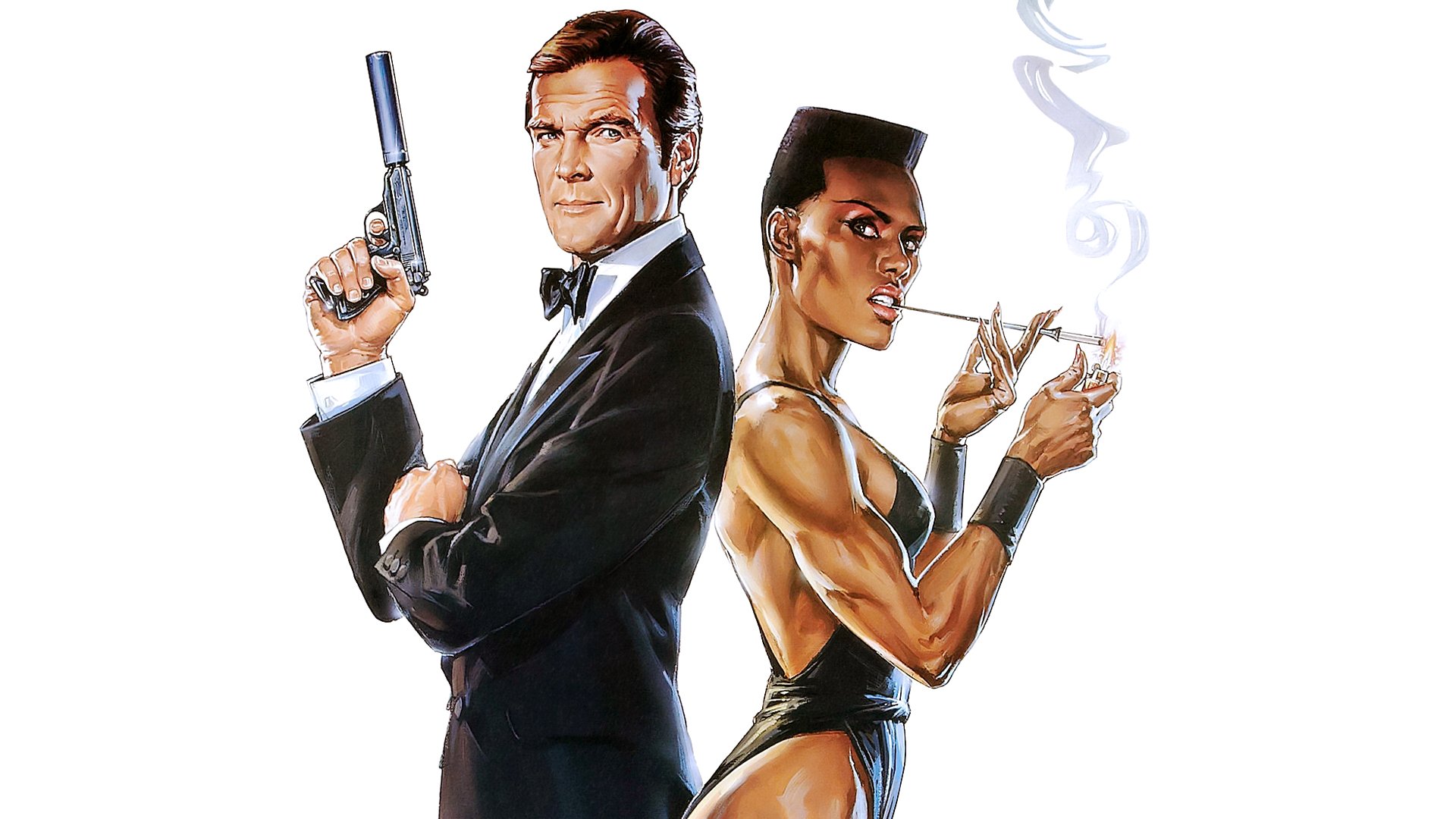 James Bond Spotlight: A View To A Kill

As soon as Roger Moore took over the role of James Bond, the franchise quickly devolved into a state of ridiculousness that rendered the entire series beyond parody. A View To a Kill, Moore’s final film as Ian Fleming’s influential character, could easily be seen as a franchise grasping for relevancy with the younger generation of its day. It tries to tone down the kitsch elements whilst still retaining a core sense of the Bond series for the millions of returning viewers not yet bored by the increasing stupidity of the onscreen antics. Younger audiences were to be greeted with a plot about microchips, because the younger generation has a burgeoning obsession with technology, as well as a supporting turn from offbeat pop sensation Grace Jones and a Duran Duran theme tune that catered for the demands of top 40 radio, as opposed to the stereotypical balladeering of a Bond theme tune.

Despite all this, Bond under Roger Moore could never be considered cool; the film acted as a final nail in the coffin for him as he realized there was something inherently creepy about womanizing a leading actress who was younger than his youngest daughter at the time, quitting the franchise shortly thereafter. Moore famously stated that his acting style could be best summarised as “one eyebrow up, one eyebrow down”, suggesting an ironic detachment from the onscreen campiness of his most famous role. A View To a Kill was nowhere near the silliest instalment of Bond in which he starred, but by trying to make the character relevant for a new generation and decade, all it did was underline how outdated the films had become, to a self-parodic level of no return. Director John Glen returned to direct the following two Timothy Dalton Bond vehicles, effectively saving the franchise from becoming nothing more than a joke in contemporary pop culture that his directorial efforts (he also helmed For Your Eyes Only and Octopussy) helped solidify.

The pre-credits sequence is unique in the Bond franchise for being played almost entirely for laughs, albeit in a way that is misjudged. Bond is in Siberia to locate the body of 003, as well as capture a Soviet microchip; this leads to an energetic skiing/snowboarding action sequence that is filmed in a way to deliberately show that Roger Moore isn’t performing any of these stunts. To underline this ridiculousness, a poor cover version of The Beach Boys’ “California Girls” inexplicably appears on the soundtrack, with the goofiness of the music presumably highlighting that this sequence is designed solely to make audiences laugh. It is the sort of sequence that makes Austin Powers or any other Bond-spoofing comedy irrelevant to the filmmakers, and Bond had devolved to a stage where his missions felt like a practical joke on the audience, designed to not be taken seriously, let alone cared about on a deeper level. The opening credits sequence fails on a deeper level, attempting to incorporate an MTV-style level of glamour commonly associated with Duran Duran’s music videos; it comes across as an awkward and somewhat stilted attempt at stylisation in a franchise where contemporary style had long since been missing.

The movie is only of a piece with then-contemporary 80’s action movies due to the view of contempt it affords the Soviet Union and its sympathizers. Here the villain is Max Zorin, played with scenery-chewing relish by Christopher Walken; he is the owner of Zorin Industries, who have been making microchips designed to withstand an electromagnetic pulse. The movie bizarrely decides to sidetrack this element of the narrative in favour of something far more antiquated and ultimately irrelevant. When tracking down Zorin and his bodyguard Mayday (Grace Jones) at Ascot racecourse, Bond is told that the horse Zorin bred for the race was drugged; upon arriving at the Eiffel Tower to retrieve this information, a private detective is killed by Mayday shortly after telling Bond about Zorin’s impending horse sale at his estate.

Keeping in line with all Bond movies during this period, all onscreen events are treated with an unrewarding lack of seriousness; the decision to spend the first half of the film focusing on the horse racing narrative, which doesn’t pay off when the story moves across the Atlantic, ensures that the first half of the movie is steeped in boredom. Although not a good movie by any means, A View To a Kill is at least enjoyable when the microchip plot is moved front and centre- not only is horse racing a difficult subject to care about in the context of a supposedly glamorous spy movie, it’s also one that later events all but state we don’t have to care about, as it is entirely irrelevant. It’s also a suggestion of how the movie is trying to appease audiences young and old without truly satisfying either; older audiences who may not understand what microchips are, or why Silicon Valley is renowned globally as the international hub of new technology, would easily understand a straightforward controversy in horse racing. Not only does this mean the film is disjointed in which audience it is aiming itself at, but it also means that in terms of the story, Max Zorin is an unintentional comic villain; compared to blowing up Silicon Valley, giving adrenaline to horses to help them win races barely registers, yet the audience is led to assume both of these are crimes on a comparable level.

Roger Moore’s movies as Bond may have been lacking heart, genuine wit or cool, but they often proved to be campily enjoyable despite all their apparent faults. A View To a Kill is nothing more than a view of what it looks like when a major franchise bubble bursts- after all, a series can only be sustained by ironic detachment for a brief period of time, before a genuine narrative purpose has to be reintroduced to remind audiences why they cared in the first place.