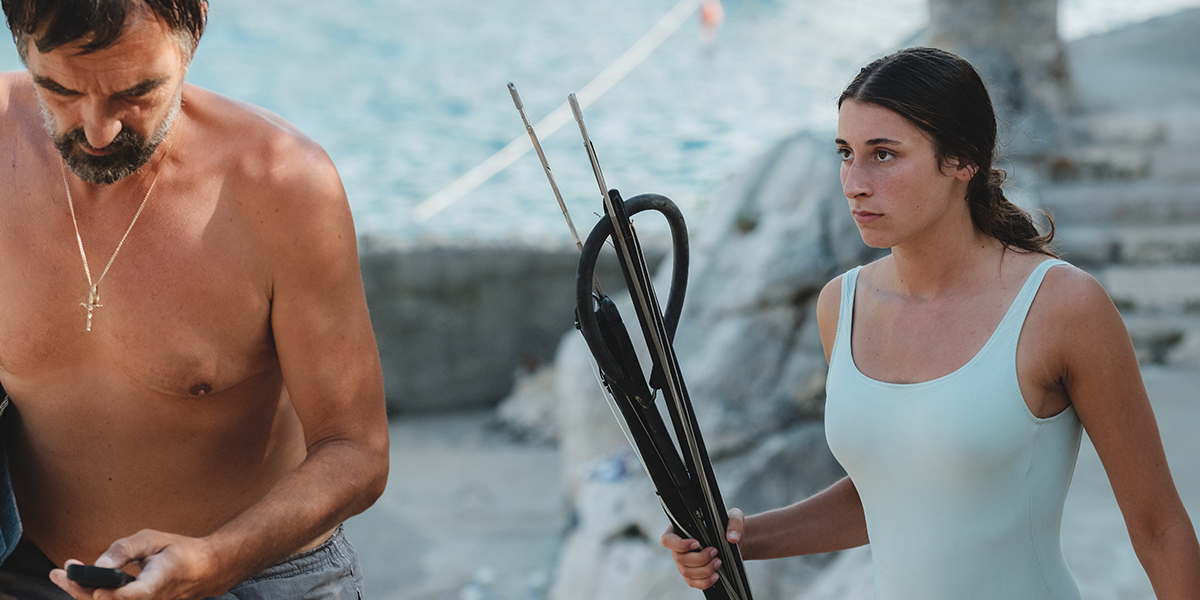 Regrets and what-ifs bubble to the surface in Antoneta Alamat Kusijanović’s Murina, where two possible lives open up for a restless teenager. Lush cinematography capturing the beauty of the Adriatic Sea hides the darkness underneath in this coming-of-age story that balances heartache with an uneasy tension. Murina is a triumph of familial tension and a spectacular feature debut.

Julija (Gracija Filipović) has a seemingly beautiful life by the sea where she frequently swims, excelling in diving for an extraordinary amount of time. However, her picturesque life is governed by her father, Ante (Leon Lučev), who has a tight leash on both Julija and her mother, Nela (Danica Čurčić). Julija’s combative relationship with her father only grows worse when his wealthy friend, Javier (Cliff Curtis), comes to spend the weekend and arrange for the purchase of Ante’s land.

Calm and collected, Javier appears to be everything Ante is not. He’s a successful businessman who treats Ante’s family with kindness and compassion – a far cry from Ante’s corporal punishment and demeaning remarks to both the women in his family. When Julija finds out Nela and Javier had a past, her whole weekend becomes transfixed on what could have been if he was her father instead of Ante. Those thoughts quickly turn into wishes and Julija begins prodding at the notion of Javier taking her away from this piece of Hell in paradise.

Murina is a beautiful looking film that helps accentuate all of the turmoil brimming within it. There’s so much anger and heartbreak in Kusijanović and co-writer Frank Graziano’s screenplay, but it’s also this young woman in the most exciting point in her life: when every option should be open to her and the opportunities as endless as the ocean. Yet, she’s trapped and nothing cements this more than Hélène Louvart’s sumptuous cinematography. Wide shots of the gorgeous sea are cut against tight close-ups of Julija and Nela, both held back by the one man in their lives. No matter how far into the open sea they go, the camera rarely distances itself to capture that sense of open-ended possibility.

It’s also a screenplay that crafts a hostile environment where anything can happen. Javier comes in like some white knight, but Murina quickly establishes that no matter how safe Julija and Nela may feel, Ante is always there and he’s watching. It all captures this claustrophobia of living in an isolated house, made worse as a teenager when you’re weighing your options for the future but being pushed in one direction by your overbearing father.

Kusijanović’s film aches all over. Every performance is filled with this fear of losing something, whether it’s what has already been lost, what you’re currently losing, or what could be lost. Filipović is transcendent though as her character analyzes every moment, skirting past her father’s purview while weighing her options and pondering the circumstances of her next action. There’s a calmness to her performance that suggests she is hiding so much within – a pondering so palpable that it rivals the quiet intensity of her father. Filipović does so much within those moments of introspection, making the few moments of unbridled joy all the more painful to see silenced.

Murina’s idyllic setting is fully tapped into and stripped of every little joy that could be conceived. While that may not sound like a fun time (and the film most definitely is not that), it makes a completely captivating experience. Diversions and loose threads get tangled up in the engine of the screenplay, dragged along until they’re eventually wound so tight that any moment tension ends is a relief. Murina goes the distance in creating a taut, suspenseful thriller within the confines of domestic unrest.

TIFF 2021: The Guilty is a Thrilling, Unnecessary Remake