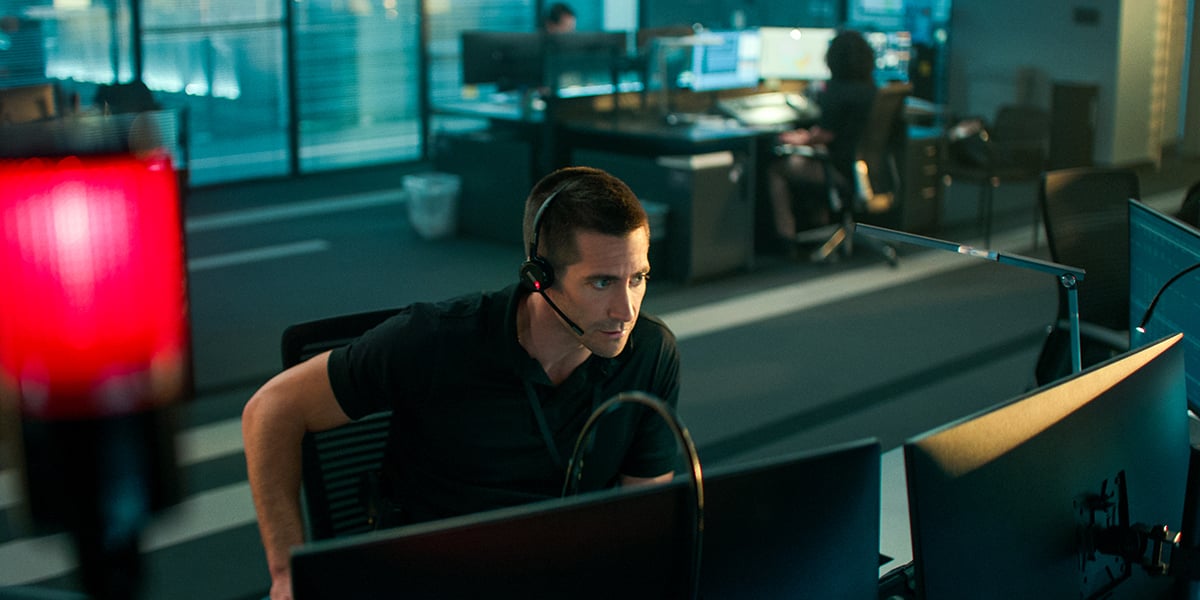 Remaking the 2018 Danish thriller of the same name almost beat-for-beat, Antoine Fuqua’s The Guilty is still a riveting film that makes some slight changes and is bolstered by a delightfully unhinged Jake Gyllenhaal performance. With a script written by True Detective’s Nic Pizzolatto, this single-location suspense film’s pulpy plot makes up for its inability to conjure dramatic weight with its constant tension.

Set over the span of a night while California’s forests are burning up from wildfires, response teams like the police, firefighters, and ambulances are all spread thin. So when 911 operator and former police officer, Joe Baylor (Gyllenhaal), receives a call from a woman named Emily Lighton (Riley Keough) who appears to be being abducted, his resources are limited on how he can help. With no license plate information and a city already on high alert from the fires, it’s difficult to near-impossible to ask for police to go on a manhunt with almost no details.

This sets in motion a white-knuckle thrill ride as Joe frantically calls in any favor he can, using his knowledge as a police officer and resourcefulness to try to locate and save her before it’s too late. However, what makes this version of The Guilty different is its use of the California wildfires in the backdrop. Take those out and the roadblocks seem a little less sensible, but with few details on the vehicle and an extremely busy night ahead, there’s a tension created in the real world that mirrors Joe’s own anxiety.

However, almost every other plot point in The Guilty is exactly the same as the original Danish film. So all of the pulp that was there before is here again, and perhaps even more exacerbated by the night not being a normal night to begin with. Everything is on fire metaphorically and literally, and when twists start revealing themselves in the screenplay it becomes a barrage of absurdity. Is this literally the worst night of this man’s life?

Coincidentally, it all takes place the night before he is about to face trial for a crime not disclosed until near the very end of The Guilty. It’s the source of Joe’s anxiety and his constant dependence on his inhaler. It’s also where the film has to reckon with why he’s going to court – something which the film believes to be its ace in the hole but doesn’t actually want to wrestle with what that means.

Instead, it’s just another twist that lets Gyllenhaal flex his acting chops. He gives another spectacular performance, rife with so many nuances and mood swings that it’s hard not to applaud such dizzying theatrics. He understands full well that the main draw of Fuqua’s film is its pulp, and Gyllenhaal has made it very clear that he loves pulp based on some of his previous roles. Where the film falters in its attempt to incorporate a sense of drama and a man reckoning with his own guilt, Gyllenhaal does what he can and it is just strong enough to not feel lost in the suspense.

The Guilty is an easy 90 minutes to burn through. Fuqua employs so much tension in such a short period of time that finding time to breathe becomes a chore. Which reflects what’s going on in Joe’s head, making the performance from Gyllenhaal even more intense. If nothing else, The Guilty will keep you on the edge of your seat, especially if you’ve never seen the original film. If you have though, there’s not much more here that warrants a remake even with some of its smart changes.

TIFF 2021: The Electrical Life of Louis Wain : Benedict Cumberbatch and Claire Foy Are Electrifying In This Peculiar Biopic