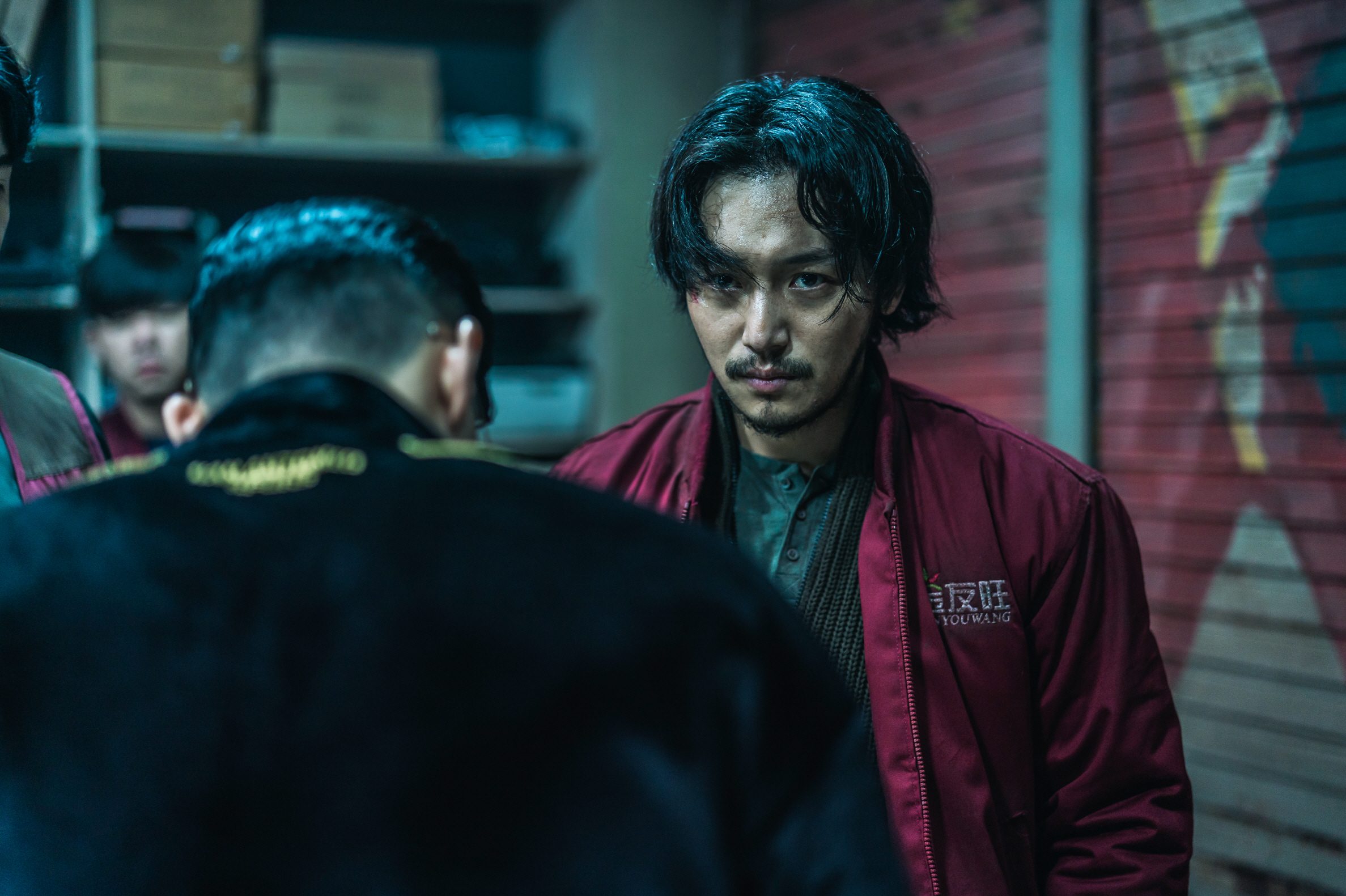 Anyone who works or has been employed by a corporation in the past few years has received an internal email regarding phishing. That’s correct, phishing, not fishing. They sound alike. As a matter of fact, the acts themselves are not too dissimilar either. In one instance, an individual parks their behind on a boat or along water shore launches the line into the water and catches fish with bait. In the other, an individual parks their behind at a desk with a computer and phone, and either mae telephone calls or sends suspiciously convincing emails to unsuspecting victims to steal their personal information and money. The Korean directing duo of Kim Gok and Kim Sun take the concept of voice phishing to action movie heights with their latest, On the Line.

Han Seo-joon (Byun Yo-han) is a former policeman turned construction site foreman. On the day he is offered a better-paid position at another site, calamity explodes. A shady young man pretending to be part of the crew sneaks into the site with a device that disrupts smartphone signals. At the same time, a stroke of unluck almost takes the life of an employee. Were it not for Han’s Seo-joon,s heroics, the man would be dead. The real tragedy happens behind the scenes. The protagonist’s wife receives a series of convincing phone calls while running her restaurant. She is encouraged by “lawyers” to immediately transfer money to settle the case against her husband for the death of a worker on site. She quickly does so and loses $70,000 in the process.

Things get worse from there. Distraught and despondent, his wife is mockingly called once more by the con artists as she crosses the street. At her wits end, she doesn’t see the approaching car and…lands in the emergency room. For Seo-joon, enough is enough. He rekindles his detective skills and sets off for China where the group’s call center and HQ are located, led by the mysterious Gwak (Kim Moo-yeol).

Fantasia’s marketing material for Kim Sok and Kim Sun’s endeavour played up the fact that the directing duo delivers an anxiety-laden, nerving thrill ride. True enough, the film delivers on the promise made by the advertising. What strikes viewers is that it does so in many more ways than one. Any cop thriller can deliver some decent chills provided the filmmakers are astute enough to create scenes in which the protagonists are in mortal danger. It isn’t necessarily an easy task, but the point is that if a thriller accomplishes that basic minimum object, it’s on its way to at least moderate success. In the case of On the Line, an increasingly common fear is uncovered: that of becoming a scam victim.

On the Line’s opening sequence is fast-paced and slickly edited. The modern filmmaking techniques on display serve a keen purpose beyond demonstrating that the Kims can put on a good show. Characters are introduced, most importantly the picture’s hero, Han Seo-joon. The viewer is also provided with an idea of how phishers operate. Now, the circumstances under which Han’s wife is baited are remarkably sophisticated. Multiple moving parts are involved and things happen incredibly fast. So fast, in fact, that some audience members may deem it unrealistic. Granted, the enemy’s methods are especially slick and depend on incredible timing, but the essential point is made. Victims of phishing, in this case, voice phishing, lose because the perpetrators prey on their emotions and fears. The latter is akin to the blood in the water that the shark detects. When they sense it, they’re coming for you.

The film’s main antagonist, Gwak, reiterates the point later in one of the movie’s memorable scenes at the China-based call center. On the Line has many qualities in its favour. Chief among them however may just be its depiction of the villainous operation. Remember those wild, rousing speeches Leonardo DiCaprio gave in The Wolf of Wall Street to his team of telemarketers? It’s like that, only in this case a team of voice phishing callers is given inspirational pep talks. Gwak evens announces when the group achieves new milestones of stolen money. Apart from the dingy setting and restricted freedoms for the employees, one could be led to believe it’s an ordinary sales company. It sounds ludicrous, but real people are fooled every day by this.

Another key takeaway is how directors Kim Gok and Kim Sun concoct their own version of Die Hard. That isn’t to say On the Line is a direct remake. It isn’t. All the same, the Korean film carries itself with an attitude that harkens back to the 1988 Hollywood classic. Byun Yo-han gives himself to the role of Han Set-joon mind, body, and soul. Emphasis on body. His character may not crack wise as much as John McClane (he’s not immune to it though) but let no one doubt the protagonist’s desire to go above and beyond the call of duty. In this case, that means a lot since he isn’t even a detective anymore! Seo-joon gets absolutely pummelled throughout the film’s second half, yet every time they knock him down, he gets back up.

Highlighting how insanely single-minded he is, as well as the nifty directing, is a harrowing elevator shaft sequence (Die Hard again, anyone?). Seo-joon is attempting to climb up via the cable system whilst thugs thwart him with punches and kicks as they too hang on. The staging is incredible, as is the editing. More importantly, the hero simply refuses to relent in the face of life-threatening odds. They messed with his woman, so they’re gonna pay.

On the Line is a reasonably convincing expose on voice phishing. While the antagonist’s set-up seems a bit heightened at times, the tactic by which these schemers take advantage of people’s emotional vulnerability is very real. Plus, scammers, be they small fry or part of seriously equipped operations, are unfathomably annoying and immoral. Go get’em, Seo-joon.