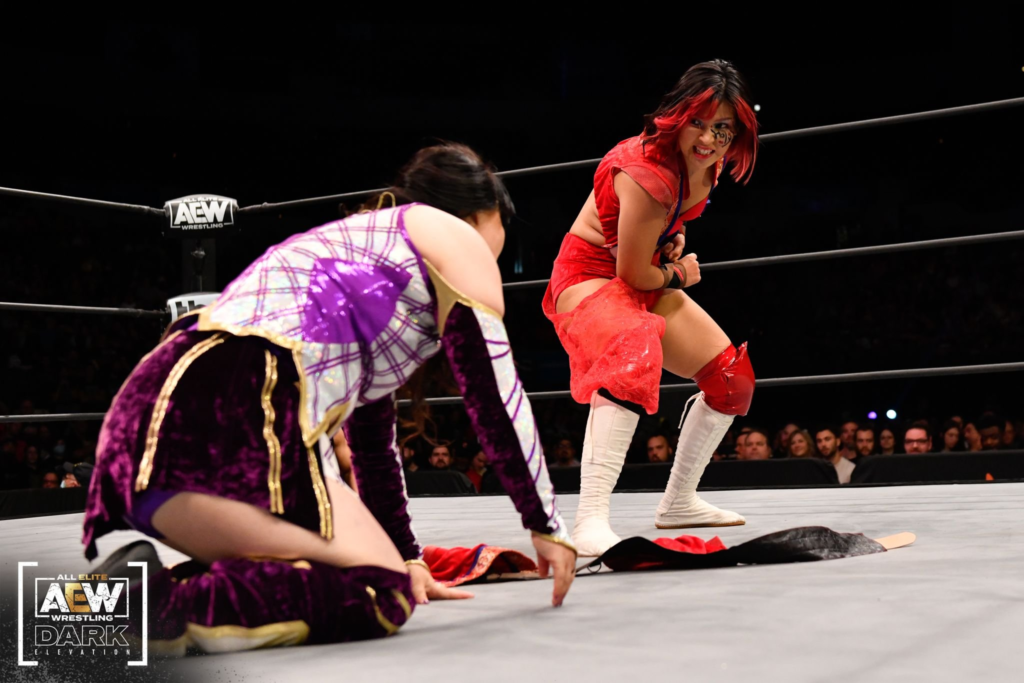 To some, wrestling’s pinnacle is 2000s Ring of Honor, ’90s All Japan Pro Wrestling, or classic ’80s NWA. To others, modern high-impact main events, or smooth and spirited joshi. Still to others, it is simply excitement. And with the success of All Elite Wrestling and their collaborative approach to booking pro wrestling, the sheer possibilities AEW offers is enough for most fans to think their live TV and PPV programs are must-watch. However, they also have a free show on Youtube that rivals that of two-hour flagship Dynamite or the compact hour of Rampage in terms of peak wrestling enjoyment: AEW Dark: Elevation.

What is AEW Dark: Elevation?

AEW Dark: Elevation is AEW’s second wrestling show on Youtube, behind AEW Dark. Unlike primary weekly shows Dynamite and Rampage; Elevation and Dark don’t have fixed runtimes, floating anywhere between an hour and an hour-and-a-half weekly. Until 2021, Elevation and Dark were largely identical, comprised of several “dark” matches taped alongside the main shows. But with Dark obtaining a home-base in Universal Orlando, AEW would ensure that Elevation is the name primarily associated with dark match tapings.

Elevation offers a consistent flavor of quick, digestible matches. Main events might reach the 10-minute mark, but for the most part, matches rarely go over 5. Of course, most of pro wrestling’s “greatest matches” have had longer runtimes, from 20-minute clinics to near hour-long broadways. But Elevation sees its share of compact gems, like this year’s Emi Sakura/Maki Itoh v Hikaru Shida/Skye Blue. And these tighter matches will always be good for mainstream wrestling, if for nothing else the long-term health of wrestlers, and to raise the stakes of those longer battles.

If you like watching shorter, respectable matches with AEW’s veteran and less-experienced wrestlers alike making the most out of fundamentals, then Elevation is a treat for you.

If we looked at Dynamite and Rampage as the only wrestling that happened or mattered in AEW, we would believe that only 2 women’s matches happened every week. We might also point to this lack of reps as the reason why the division can’t seem to get “better.” But these just aren’t true.

The women take up close to half of many Elevation cards, which usually run about 7-10 matches. Wrestlers like Emi Sakura, Nyla Rose, and Kris Statlander have been typical names that put on TV-level performances. Of course, none of these are for titles and usually feature tag teams that never make it to TV. But for fans of the wrestling, these matches since 2021 have been a testament to the division getting “better.”

If fans wanting “better” from the division mean putting more of Elevation’s best on TV, then I agree. (The 1-segment limit is baffling, but I’m not a TV network, so.) But names like Jade Cargill, and more recently Julia Hart, have been on Elevation and later appeared on TV looking far more comfortable. Elevation’s women’s matches matter because they make the division better, and Elevation is currently the best vehicle for it.

A big budget wrestling show featuring quick, pre-taped matches and a chill live audience provides a calming atmosphere. But a lot of that atmosphere also has to do with the show’s commentary. For instance, it calms me down knowing Excalibur won’t be cramming 3 paragraphs worth of ads during the opening sequence of a promising match. But I digress.

Jests aside, I’d be remiss not to bring up the legitimate Elevation highlight that is the charming banter between tandems like Tony Schiavone and Eddie Kingston. More recently, hearing Ian Riccaboni on play-by-play duties outside of ROH made for a pleasant surprise. The roulette of commentators, and the loose dynamic between tandems, is the perfect soundtrack to the lighter action on Elevation.

Maybe the biggest reason to love Elevation is the crowd. Yes, the live Elevation crowd is sat there simply to warm up for Dynamite and Rampage, but the energy they bring to the table is superb. It is refreshing to have a giant crowd that is just totally and consistently supportive of the action. To the point where if something particularly out-of-left-field happens — such as a missed swanton onto the ring apron or a surprise appearance by the Blue Meanie — it almost feels as if the crowd doesn’t know how to react initially, and the noise just slowly spreads like a fire, rather than the sudden gush from atop a giant waterfall more akin to main shows. The crowd is present when they need to be, such as for entrances or to rally for a fiery comeback. Then, they kick back when a reaction is not needed.

This wholesome display of appreciation extends not just to the live crowds, but to the Youtube comments section, as well. Each episode of Elevation is always accompanied by fans dropping their favorite little moments or standout wrestlers of the episode. Or how they want to see more of this person move up the ranks, or even get signed.

I don’t know how many people also watch wrestling for the crowd, but if you’re the type, there’s Elevation.

There is safety to watching Elevation. Given the show format, I know I can skip over matches involving names that haven’t captured me yet. It’s all dark matches for the wrestlers and the live crowd, so it probably wouldn’t hurt the flow of the show. And I bring up the atmosphere and the crowd, but honestly, most of it might be the crowd. Because those reactions in the building, as well as on Youtube, can only really come from people who go into wrestling without any real expectations. And that is safety — from gatekeeping, from unnecessary non-dialogue.

Maybe the only thing fans really expect is an episode of Elevation for the week, and another episode next week. And that might be the most enjoyable way to watch wrestling.