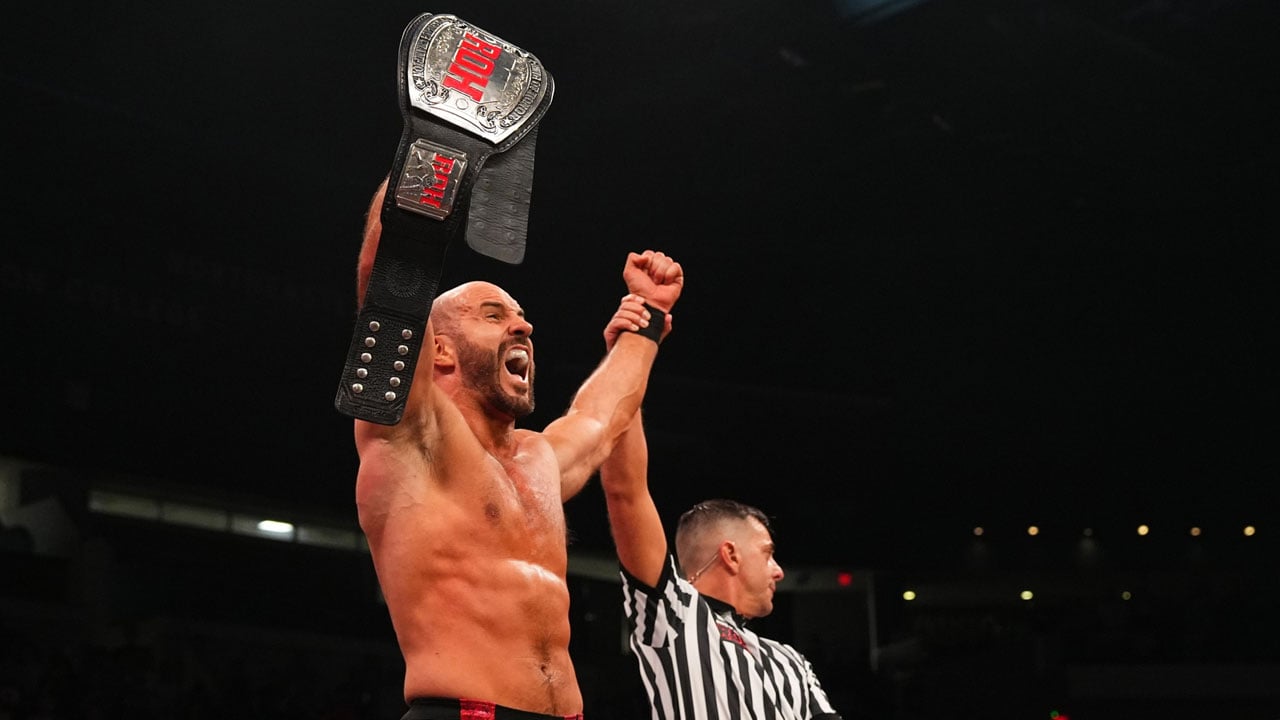 ROH Death Before Dishonor 2022 Was a Major Success!

With ROH Death Before Dishonor 2022 employing a more stripped-down card focusing only on championship matches up until the week of the event, there was great intrigue among fans, who were sure to expect a different product from Tony Khan’s usual 4-hour PPV format in AEW. The result was a night of great wrestling and pacing that helped the audience breathe in between victories. On a show featuring ROH Hall of Famers and top names on AEW, which aspects of the event made Death Before Dishonor one of the best shows of the year?

Since AEW Battle of the Belts II in April earlier this year, Dalton Castle and the Boys have won the hearts of the AEW audience, thanks in large part to the trio’s mighty colorful, made-for-TV pageantry and presence. Those clamoring for more Castle and Boys (Brandon and Brent) would get exactly what they want, as they challenge for the ROH World Six-Man Tag Team titles, held by The Righteous (Vincent, Bateman, and Dutch).

The match saw the peacock heroes on the beatdown to try and shift the momentum away from the cohesive unit of champions, led by 4-time Six-Man champion Vincent. The height of this bout saw Castle infinitely tossing The Boys from inside the ring to Righteous members out on the floor, generating enough momentum to crown new Six-Man champions in Castle, Brandon, and Brent in a fun match.

As if opening the main show with the ROH World title match wasn’t enough, Claudio Castagnoli called his shot in the promos and won the ROH World Championship—his first world championship—from Jonathan Gresham, as well.

Fans knew to expect the solid technical showcase from “The Octopus” and Castagnoli that they put on (albeit not as short as the bout that resulted); however, the result was not as easy to predict, especially with the factor of Tully Blanchard Enterprises introduced on Rampage weeks prior. In the end, we would not see any TBE involvement at all; and as fans witnessed on this night, in the sport of professional wrestling, Castagnoli can easily become World Champion.

Between the ROH World, Women’s World, Pure, and World Tag Team titles, the art of technical wrestling as a whole was well-represented at this show. Wheeler Yuta and Daniel Garcia’s Pure match had exchanges and emotion that rivaled and even exceeded that of the men’s World title defense. Mercedes Martinez and Serena Deeb showed how to make the most out of a match with only submission moves and a couple of heavy, elevated suplexes thrown in. FTR and the Briscoes, especially in the 1st fall, saw an excellent display of technical control using headlocks, suplexes, and an aggressive long-game of leverage. ROH is a clinic, and we are the perpetual sick.

With 7 matches over a 3-hour show (and a Zero Hour largely devoted to developing names), Death Before Dishonor XIX came out a great show enhanced further by great pacing and length. Matches and wins were given ample time to do what they do, before transitioning over to the next thing, a refreshing change of pace from the common sentiment of AEW shows moving to the pace of Eminem’s “Rap God.”

From opening strong with the ROH World Championship; to interlacing technical matches with the spectacle that is Dalton Castle and the Boys, and high-velocity matches like only Rush and Dragon Lee can deliver; ROH loaded the front half of the show with great varied action.

Then came the semi-main, featured both excitement for the in-ring return of Samoa Joe since the Owen Hart Foundation Tournament in May, as well as a dubious, uneasy feeling waiting in anticipation for Sonjay Dutt and Satnam Singh to sully the affairs. Finally, closing with absolutely the right match, the one that embodies the potential of ROH as it stands today: FTR v the Briscoes, 2-out-of-3 falls—no more excuses, let them duke it out, give them all night.

Tony Khan did it. He put the tag team match in the PPV main event. (Thanks apparently to a coin toss.)

In the Death Before Dishonor preview, I mentioned being unsure about seeing sequels to classics like Briscoes v FTR I, due to the physicality with which both teams went at it. But we—wrestling fans and, beyond that, human beings on this planet, always searching for that next shooting star that will change our lives—we would have been robbed.

Both teams took things slow early, and had the trust of the crowd to maintain the tempo and let the action breathe. Many have (rightly) touted the greatness of Dax Harwood in 2022, but Cash Wheeler was white hot on his comebacks and hot tags all match, delivering big chops and picture-perfect brainbusters with unique intensity. And really, all 4 of these men went to war; a war that saw the Briscoes with their always brutal kicks, a sick ring bell shot which sounded straight out of a video game, a gasp-inducing back suplex from the second rope to the timekeeper’s table, and the nastiest piledrivers all night, including that final one, which scored the final and deciding fall.

Glad that coin did what it did.