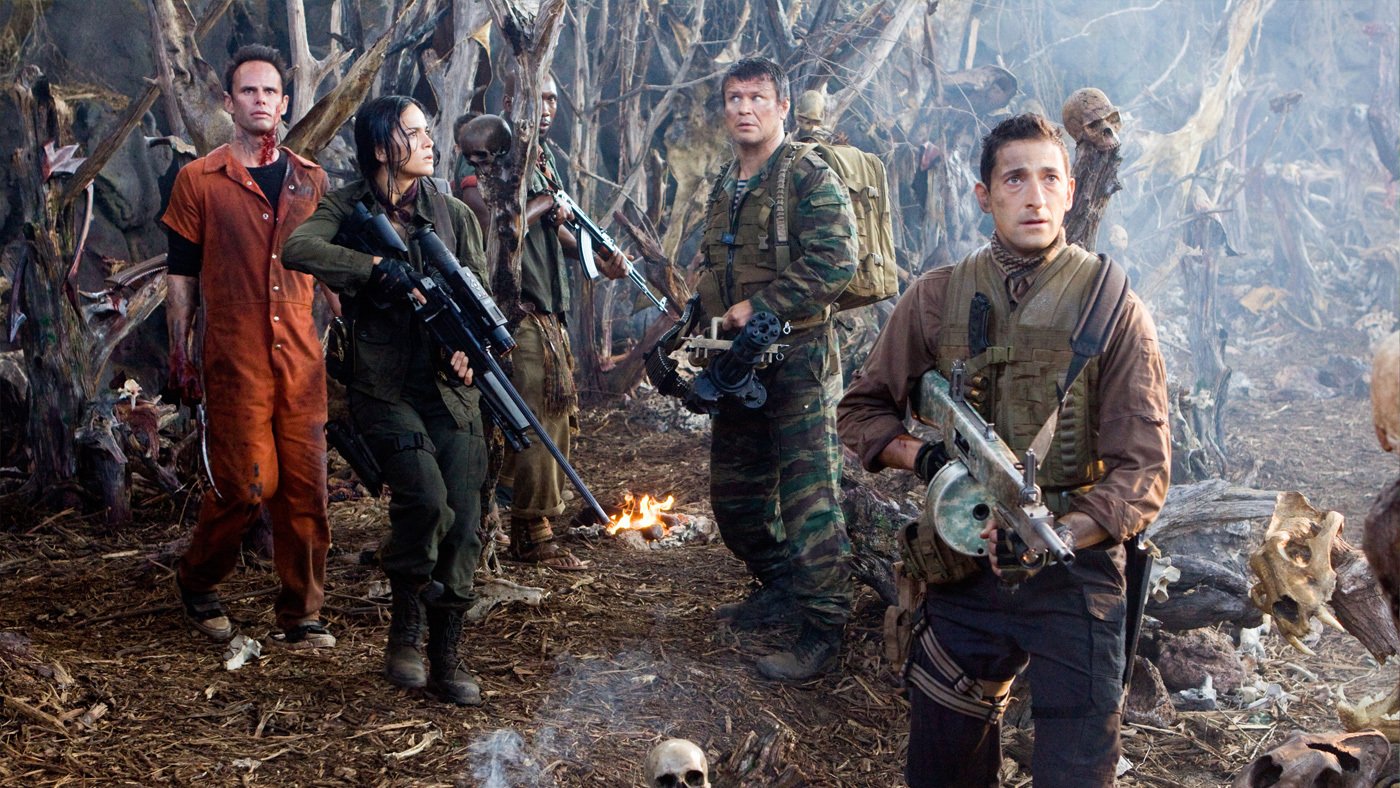 If it is possible to make a decent sequel to Predator, Predators is around halfway there, and that’s about as close as anyone’s gotten as of this writing. Taking what works about the original and adding some new twists, the film sticks closely to a formula but does so with enough technical and storytelling competence to make it an enjoyable watch…at least as far as the first two-thirds or so are concerned. After a strong start, Nimród Antal’s sequel stumbles at the finish line, dropping in some unneeded late-game elements that ultimately harm the film, which up until that point had been much more focused. The bones of a really good Predator sequel are in there, but some of the meat on top of them has been chewed off a bit off.

Predators takes things back to the basics by setting the action once again in a dense tropical jungle rather than attempting an urban setting a la Predator 2. Our protagonists are once again a group of hardened badasses beset upon by unseen hunters (a trio, this time), and must fight their way to safety. But there’s a twist: this time the prey are a mismatched group of assorted criminals and military types, dropped onto an alien planet after being abducted by the Predators. Adrien Brody plays a hard-bitten, ex-Special Forces guy, Danny Trejo appears as a cartel enforcer, and there’s even a bear-like Spetsnaz guy who carries a minigun around.

So we’ve got a similar hook to the original, but with a twist — a kind of Cube-esque setup where a group of supposedly qualified strangers are dropped into an insane scenario and have to work their way out of it. And for a while, Predators actually works this angle pretty well. The inter-group dynamics are established early on and largely stuck to, with most of the players having enough of a distinct role and personality to stand out. The film takes its time setting things up, showing remarkable restraint by only revealing the Predators themselves around forty minutes in. The performances are largely good, though the decision to cast Brody against type as a scowling badass never really works. Laurence Fishburne shows up for a great fifteen minutes or so as a crazed survivor of a previous “season,” and his all-too-brief role ends up being one of the most memorable.

However, around the midway point, problems start to spoil the fun. There are several entirely unneeded info dumps, like when Alice Braga’s sniper character basically recounts the events of the first film. We’re meant to believe that she somehow heard about Dutch’s account of what happened to his team, and it would be easier to believe that some random Israeli Defence Forces sniper would have somehow become privy to that information if it really added anything to the narrative. The film starts becoming less efficient, slowing down to explain exactly what’s going on despite the fact that most audience members will know all of it already.

The script also introduces a Predator vs Predator subplot, wherein a Predator resembling those of the first two movies goes up against one of the sequel’s bigger, scarier new ones. This subplot never really goes anywhere, existing entirely to justify one fight scene that ends fairly quickly. It feels like a plot point that was much more important in an earlier draft, a vestigial idea that got cut down from a major element to something largely superfluous. Beyond a bit of lip service to the original, it really adds nothing, and the movie has enough shout-outs as it is.

These are the kinds of problems you could easily blame on studio interference, a drive to dumb things down and over-explain, and possibly even the Frankensteining of two different scripts together. Whether or not that’s really what happened is ultimately beside the point; what ultimately matters is that Predators loses a lot of focus, becoming much messier by the end. This is actually a real shame because those shortcomings hold the film back from being at least “pretty good.” It was never going to be great, but it had the potential to be a mostly worthy sequel to the original.

TIFF 2018: ‘Shadow’ is an Ink Wash Painting Brought to Life